Every day, something seems to change in the world of college football recruiting. Ohio State certainly isn’t exempt from the tumult that can make or break a recruiting class, but for the most part, the Buckeyes have been able to maintain their spot atop the Big Ten’s recruiting rankings.

Every year since Urban Meyer’s arrival, Ohio State has finished with the conference’s top-ranked recruiting class but is struggling to maintain that spot to this point in 2019.

What players would ensure another first-place finish? There are dozens of prospects still getting major attention from Ohio State, so as we try to pare down the list to just a few key names, we have to acknowledge that things — as always — can change.

Previously, defensive tackle Faatui Tuitele and cornerback Kaiir Elam were on this list, but they’ve dropped off as new names have been added. 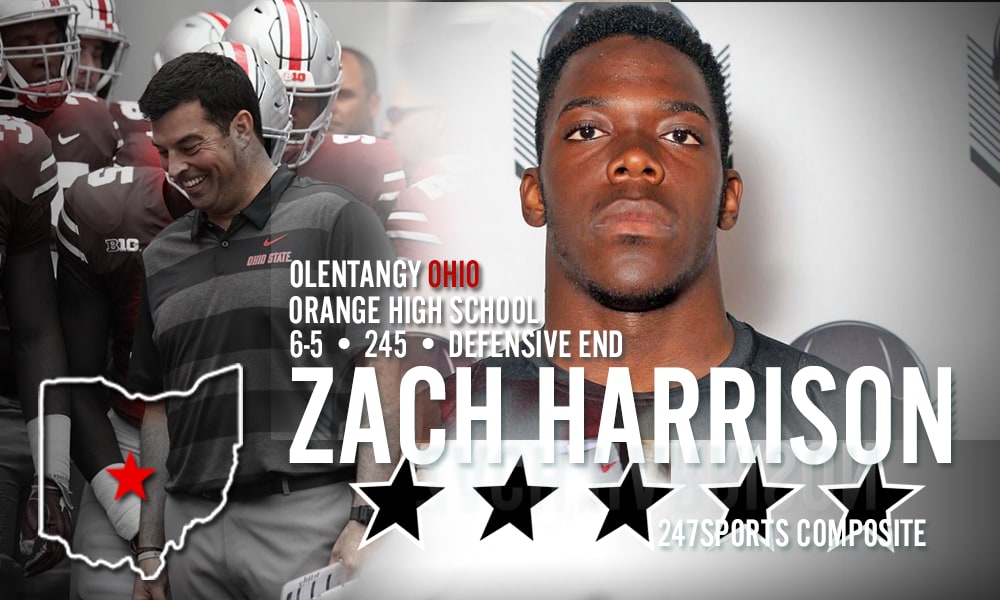 No surprise here, Zach Harrison, the 5-star defensive end from Olentangy (Ohio) Orange High School is the most important recruit on the board for Ohio State in 2019.

The Buckeyes are fighting off Michigan and Penn State to land him. A decision will come whenever Harrison has made up his mind, and he’s already made an official visit to all three of his top schools.

Harrison took an unofficial visit to Penn State on Sept. 29 and to Michigan on Oct. 13 and returned to Ohio State on Nov. 3 for the Buckeyes home game against Nebraska.

Harrison made a surprise visit to Ohio State the week before the Buckeyes throttled Michigan 62-39 but his recruitment has remained a mystery to this day. There’s no specific date for a decision but Harrison wants to sign in the December signing period and enroll early so we’re probably within two weeks of an announcement.

Ohio State landed a commitment from Florida defensive back Jordan Battle in June but since the suspension of Urban Meyer, there’s been a “battle” between the Buckeyes and the Alabama Crimson Tide and that continues to this day.

Battle is a “must get” for Ohio State and despite still being committed to Ohio State, he finds himself on this list because Meyer’s recent retirement turns up the heat on the Buckeyes to a new level if they want to keep him in the 2019 class.

There’s an NCAA rule that allows for prospects to take a second official visit to a school if the school changes its head coach, and the Buckeyes are hoping to get him back to Columbus in January to lock him up.

Another Buckeyes commitment on this list, Doug Nester was the first Ohio State commit in the Class of 2019 and was solidly pledged to the Scarlet and Gray for more than a year but Urban Meyer’s retirement has thrown things for a little bit of a loop.

With uncertainty around who will be his position coach, Nester has decided to no longer sign in December and to delay his enrollment which had been planned for January.

Georgia, Virginia Tech and Penn State are all hoping to benefit from the questions in his mind. Ohio State will hope to solve them all when he takes his official visit over the weekend of Dec. 7.

Jaden McKenzie, D’Von Ellies and Cavon Butler are the three remaining targets at the defensive tackle position and could have their placement on this list flipped around but I have McKenzie first because I believe he’s got the highest ceiling of the three linemen.

Ohio State received an official visit from him over the weekend of Nov. 24 and he’s been in contact with Larry Johnson regularly before and after that trip. He’s also a player that isn’t likely to be swayed by Urban Meyer’s decision because the lure of Ohio State is Larry Johnson, not necessarily Meyer himself.

There is work to be done if the Buckeyes want to snag McKenzie from North Carolina — especially as the Tar Heels will make a big push with new coach Mack Brown — but Larry Johnson is working hard.

The Buckeyes could’ve had a commitment from Ellies in late July had they decided to accept it, but now — thanks to recent offers from Florida and Penn State — the waters are a bit muddied in this race.

The Maryland native doesn’t have the recruiting accolades, but the country’s No. 27-ranked defensive tackle has big offers and more are going to come his way as he enters his senior season.

Ellies made his official visit to Ohio State the weekend of Nov. 24 but still hasn’t decided on his ultimate decision. USC is getting involved, Michigan has recently offered as well as his senior season tape begins to impress around the country.

Toledo’s Cavon Butler was offered by Ohio State during a visit to the school on Oct. 6, 2018 and the talented defensive lineman has become a real option for the Buckeyes since.

Butler is committed to Kentucky, but he will visit Ohio State and Michigan State at some point this winter. He also visited Kentucky over the weekend of Nov. 2. Ultimately, his spot in the Buckeyes recruiting class may be a matter of him taking care of some academic issues that plagued him earlier in his high school career.

Butler is going to sign his Letter of Intent in December so the Buckeyes are going to need to make a decision about where they see him in their pecking order very soon.

Ohio State recently offered Broeker, an Ole Miss commitment, and he’s told Lettermen Row that the two sides have been in regular contact since. To this point though, Broeker has not yet visited Columbus but intends to do that whenever his high school football season is over.

Broeker, the country’s No. 65-ranked offensive tackle, is Illinois’ ninth-ranked player in the Class of 2019. He committed to the Rebels in June.

An official visit is scheduled to Ohio State for Dec. 9-10. He intends to make a final college decision before Dec. 19. Broeker had the honor of being the first recruit visited by new Buckeyes head coach Ryan Day.

Ohio State has made a big move on in-state prospects in recent weeks and the Buckeyes hope that pays off with Northmont linebacker Jestin Jacobs.

An Iowa commitment, Jacobs made an unofficial visit with Ohio State on Nov. 24 for the Michigan game and decided to schedule an official visit for the weekend of Dec. 7-9.

Linebackers coach Billy Davis has been working to get Jacobs into the idea of staying home and the Buckeyes have one final shot to make a splash during his official visit.

The only non-offered player on this list, Tyler Foster is an intriguing prospect inside of Ohio and a player the Buckeyes have kept close tabs on in recent months.

Committed to the University of Ohio, Foster has no interest in flipping to any school that isn’t Ohio State and the Buckeyes have hosted him for two visits in the last four weeks as they continue to evaluate his talent and their needs for another tight end in the Class of 2019.

If Foster is offered, it will be hard for him to turn down Ohio State.