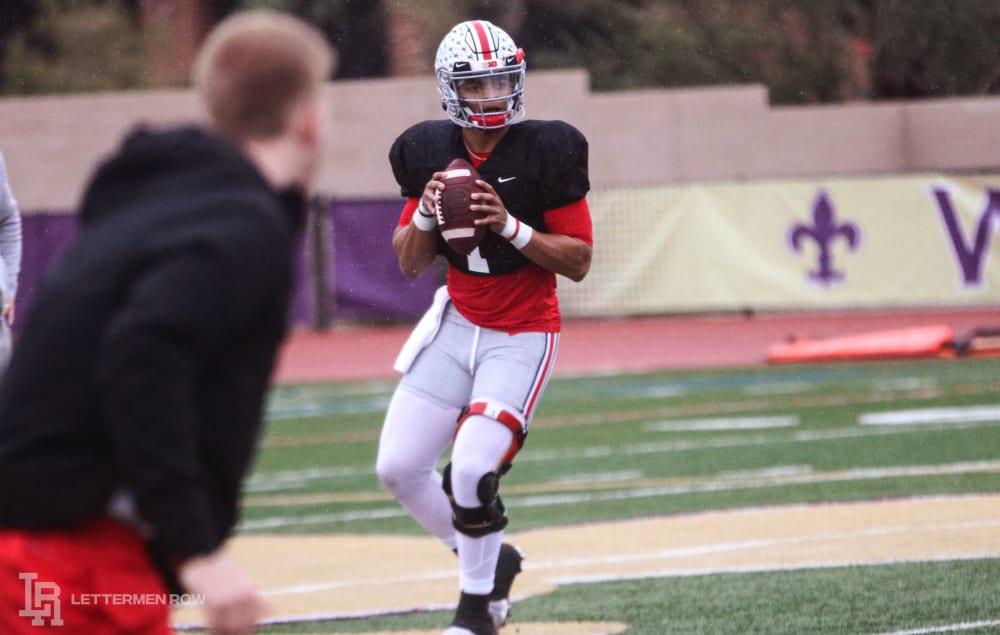 But he could be even better this year as a second-year starting quarterback. He’s commanding the offense. He’s a captain and a huge leader in the offense. And he’s now faster and learner as he continues a new diet.

Fields is on a vegan diet.

Fields was fast last season. He outran defenders regularly. He was lean last year, keeping his massive frame while staying one of the most mobile and elusive quarterbacks in the country. But now under the new diet of no meat byproducts, Fields has trimmed down — and he looks like he’s in for another great season.

“Here’s a kid that wanted to become a great player,” Wilson said. “Part of that, he knew, was taking care of his body.”

And it might just lead to a Heisman Trophy-worthy season.

On this week’s episode of Weekend Kickoff presented by Bryant Heating and Cooling Systems, Austin Ward is joined by another group of Ohio State legends.

The group assembled for Week Two includes: Urban Meyer, Robert Landers, Beanie Wells, Anthony Schlegel and Cardale Jones. The group discussed the Big Ten schedule, how the Buckeyes should manage training camp as well as picks for the upcoming slate of games across the country.

Stay tuned every week as Lettermen Row continues to build the Whatever It Takes Pregame Show. The show will be at Urban Meyer’s Pint House every Thursday night at 7 p.m. for a breakdown of the Buckeyes and the weekend of football ahead.

Buckeyes being selective in search of 2022 running back

Ohio State has two of the top running backs in the class of 2021 committed to the program. TreVeyon Henderson and Evan Pryor are going to be great for the Buckeyes. But they may create a log-jam at running back in the future. Could that impact 2022 running back recruiting? Lettermen Row’s Birm has more:

A quick look at the current Buckeyes roster shows Trey Sermon as the only running back that was absolutely going to be departing following this season — and heck, now even he doesn’t have to, though he probably will anyway. Even if — when — Sermon heads off to the NFL, the Ohio State running back room will still consist of Master Teague, Marcus Crowley, Steele Chambers, Miyan Williams, TreVeyon Henderson and Evan Pryor in 2021. If we assume, which is always dangerous, that there’s some form of attrition from that group heading into 2022, there will still be three to four really talented tailbacks on the roster when the class of 2022 arrives.

Because of that, the Buckeyes can afford to be pretty selective in that cycle.

Jeremy Ruckert puts strong hands to good use for Buckeyes
What We Learned about Buckeyes from Kevin Wilson, veteran tight ends
Advertisement