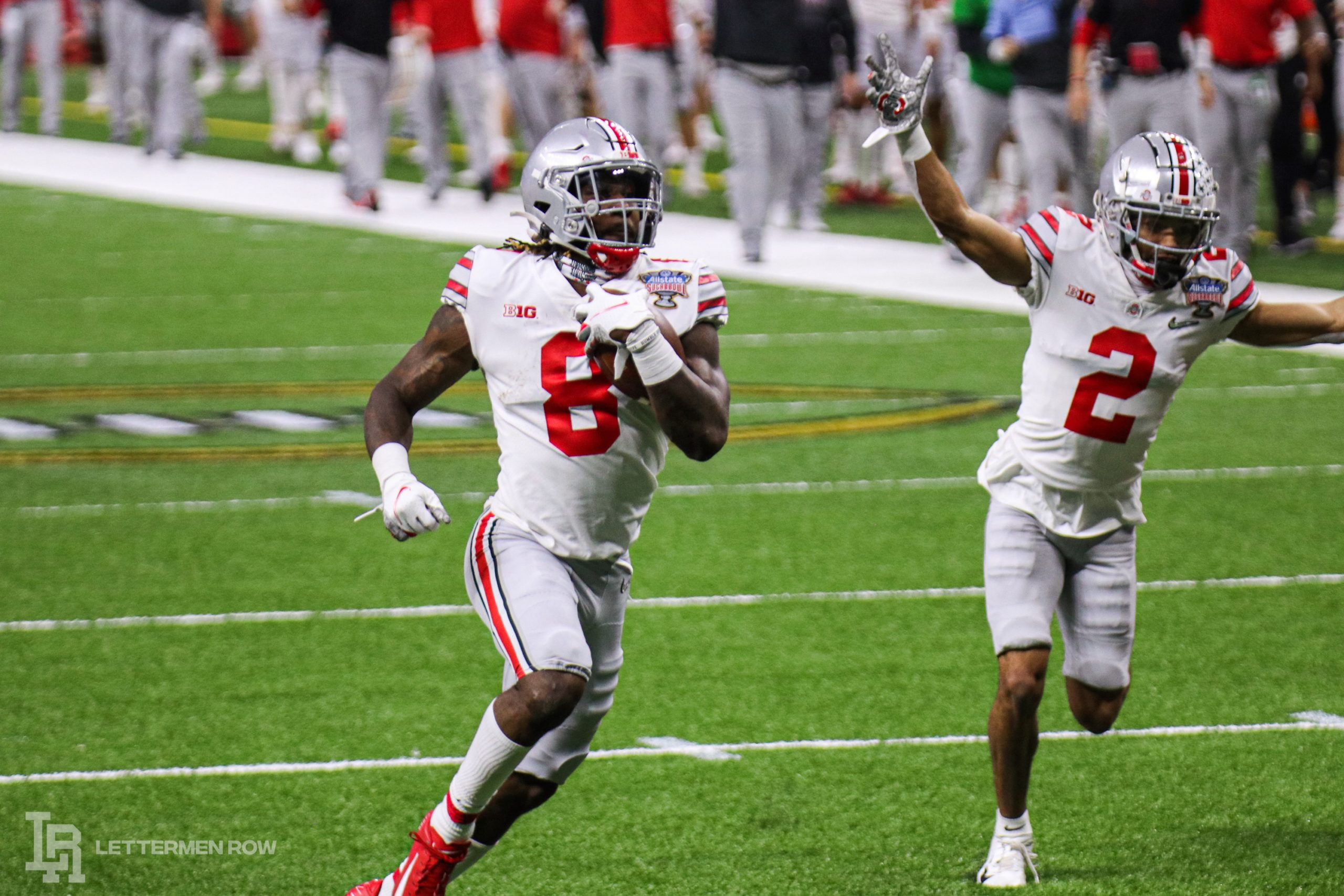 Trey Sermon is using his platform to raise money and awareness. (Birm/Lettermen Row)

Trey Sermon broke records during his lone season at Ohio State, building a brand and creating a large platform.

He’s now using that platform to raise money. During Sermon’s Pro Day on March 30, when scouts from around the NFL will receive a closer look at Sermon’s skillset, he will be raising money for Arise by Faith, a charity that helps victims of domestic violence.

Sermon’s mother is a victim of domestic violence, so the cause is close to his story. Now, he wants to make a difference by allowing one-time donations to the charity or pledging money per vertical-leap inch he jumps during his Pro Day.

“As I take the next step toward achieving my NFL dream, I am excited and humbled to use my performance at my NFL Pro Day to support Arise by Faith,” Sermon said on the fundraising page. “It is important to me to use this great opportunity to positively impact others. Please join me in by making a pledge!”

Sermon was dominant for the Buckeyes on their way to a national title game appearance, a run of games that allowed him to build a large platform. He’s beginning to use that platform for good, already raising money for a charity close to his heart.

The Nittany Lions have struggled this season and have a losing record on the year, sure, but Ohio State always has trouble in State College. And with a top-five matchup against Michigan on deck, it could have been easy for the Buckeyes to overlook Penn State.

Thursday night was yet another battle between Ohio State and Penn State, but this time, the No. 4 Buckeyes used a big second-half run to pull out a 92-82 win to earn their seventh-straight win and first win at Penn State since 2017.

Ohio State (18-4, 12-4 Big Ten) trailed by eight midway through the second half before using an 18-2 run to claw back and regain the lead for good. The Buckeyes were led by the lethal duo of E.J. Liddell and Duane Washington, who have been the steady offensive hands for this team all season.

Now they can turn their focus to their top-five matchup against No. 3 Michigan on Sunday, a game that could be the Game of the Year in the Big Ten.

Dallas Gant has been patiently waiting his turn in the Ohio State linebackers room. When he has had a chance to find time on the field for meaningful snaps, he has certainly made the most of them, such as the chance to start against Michigan State when the linebackers room was thin last season.

Now with four linebackers out of the program and off to the NFL, the opportunities for Gant to make an impact will rise. And he’s ready to make the most of them.

What makes Dallas Gant key to the offseason reloading at linebacker for Ohio State? How can the senior take the next step in his development for the Buckeyes? Where is there still room for improvement with the Silver Bullets? Former Ohio State linebacker and soon-to-be NFL Draft pick Pete Werner popped in some highlights of his former teammate and answered those questions in the latest episode of BuckIQ.