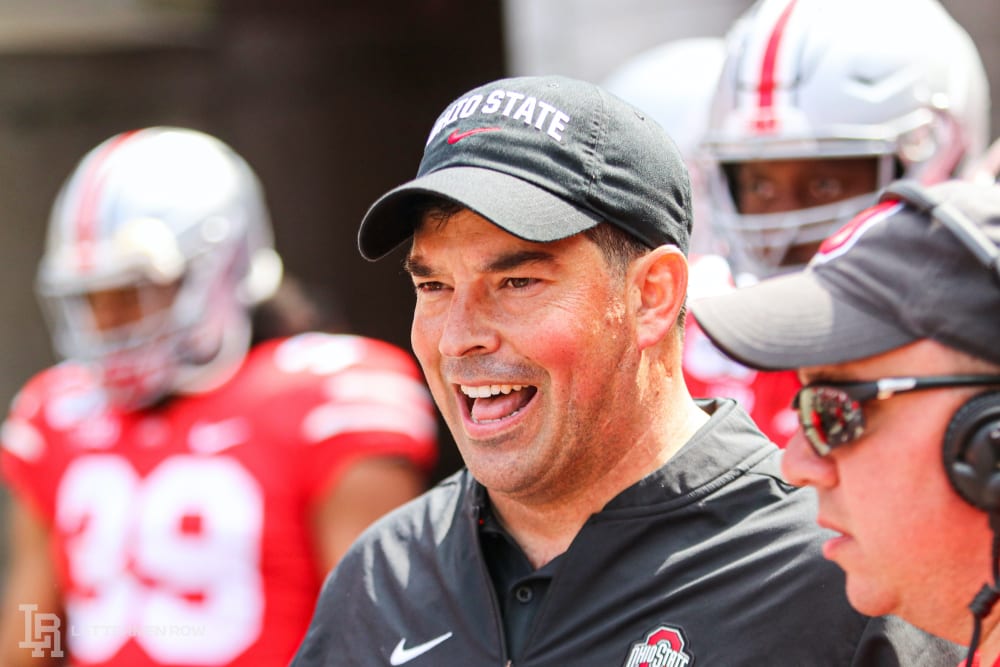 Ohio State coach Ryan Day has the Buckeyes locked in so far this season. (Birm/Lettermen Row)

Ohio State seems to be on a roll through three games.

The Buckeyes have outscored opponents 86-13 in the first half this season, and to the outside, Ohio State is a polished team destined for the College Football Playoff. Don’t tell Ohio State coach Ryan Day that the Buckeyes are a complete team. The way Day views it, there’s a lot to fix.

So when the Buckeyes face Miami (Ohio) as a 39.5-point favorite Saturday at Ohio Stadium, they’ll have a lot to clean up before next week’s primetime matchup against Nebraska.

“Yeah, we played well, but we didn’t play great,” Day said. “We played hard, they played tough, but we have so many things to clean up, and when you watch the film, it’s actually really frustrating to watch. There’s so many things we could be cleaning up there. The coaches are working at it. We started that on Sunday and making sure we started addressing some of those issues.”

It might be scary if the Buckeyes can get those things cleaned up.

Master Teague didn’t waste much time claiming the backup running back job, even after Demario McCall was named the second-stringer to begin the season.

After an impressive first two weeks, Teague went over the 100-yard mark for the first time in his Ohio State career Saturday against Indiana, including a 40-yard touchdown run in the second half.

Teague has received a heap of praise from the coaching staff for his three-game effort. But he may just be getting started. Remember, he missed much of the offseason with an injury, which might be the only reason he wasn’t the No. 2 back from the jump.

What has helped Master Teague thrive early in the season? How does he fit best in the plans for Ohio State? What is it about his rushing style that is working for the Buckeyes? Former Ohio State star tailback Beanie Wells was back in the Lettermen Row film lab breaking it all down with Lettermen Row senior writer Austin Ward in the latest episode of BuckIQ.

Miss any of Wednesday night media session with Buckeyes?

Select Ohio State players met with the media Wednesday evening, and Lettermen Row was on scene.

Miss any of the video interviews with the Buckeyes? Lettermen Row has you covered with the videos of each player on our Youtube channel.

In the latest edition of Senior Tackle, 2020 Ohio State wide receiver commitment Jaxon Smith-Njigba talked about what Homecoming festivities mean to him and his Texas high school. He also talked about his relationship with some of the other Ohio State commitments and the future of Zone 6.

Didn’t catch the full journal from Smith-Njigba? Click here for the full story.