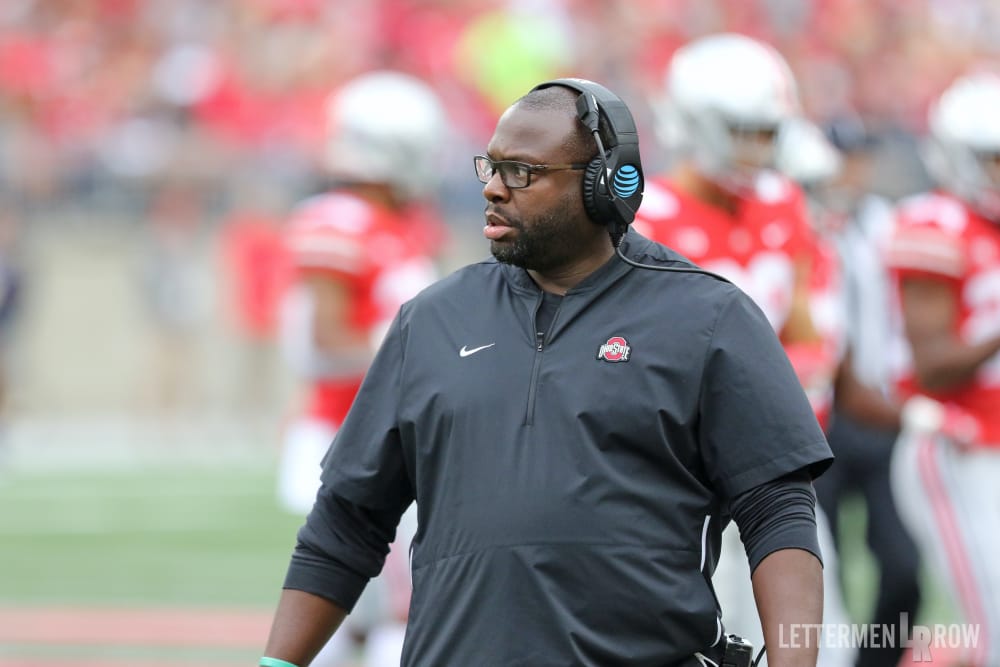 Tony Alford and the Buckeyes will receive a visit from TreVeyon Henderson. (Birm/Lettermen Row)

Ohio State is busy on the recruiting trail trying to lure one of the top running backs in the 2021 class. Our very own Birm has been writing about plenty of the top backs, but one that hasn’t been mentioned much is five-star back TreVeyon Henderson. A back who just earned the title of best running back in the class, after a 247sports.com rankings adjustment, is set to visit the Buckeyes this spring. And that’ll be a huge day for Tony Alford, Ryan Day and the Ohio State class of 2021.

Here’s part of the story from Birm:

The Buckeyes like Henderson a lot and have made that clear to him, though that’s something plenty of schools have done.

“[That complete approach] matters somewhat,” Henderson said. “A lot of schools say that I’m a top priority for them, though.”

To continue proving how they value him, Ohio State will have to take full advantage of the trip Henderson is making to Columbus over the weekend of April 10. It will be his first visit with the Buckeyes.

Just because he’s not been talked about much, doesn’t mean Henderson isn’t a real priority target for the Buckeyes. He is, and his name will be used a lot more in connection with Ohio State moving forward.

The Buckeyes are probably going to turn to the transfer portal to try to replace Amir Riep and Jahsen Wint in 2020 after their dismissal.

But what about beyond that? How will Ohio State restock its secondary under former-and-now-current defensive backs coach and coordinator Kerry Coombs? There are quite a few realistic options out there for the Buckeyes, and Coombs is already beginning to make headway on the trail after being hired a few weeks ago. He was on the road almost instantly and will be again when the dead period is over and coaches can begin visiting again.

But the competition is going to be stiff as Ohio State chases the best members of the secondary in the country. Lettermen Row broke down some of the key targets and names to know for the upcoming months. Three-star safety Jaylen Johnson is already committed and taking one of the likely two safety spots in 2021. But there are certainly others who will have a chance to join the class that is currently the best in America.

For a comprehensive breakdown of the targets at cornerback and safety, click here.

After winning five of six and cracking the latest AP rankings, Ohio State struggled on the road once again.

The Buckeyes got behind early and could never come back in their 85-76 loss at No. 20 Iowa. National Player of the Year candidate Luka Garza was a pain for the Buckeyes; he had 24 points for the Hawkeyes.

Ohio State trailed 18-3 in the first few minutes, then went on to outscore the Hawkeyes throughout the rest of the game. But that didn’t matter in the end, as the Buckeyes couldn’t find a way to take the lead at any point.

There isn’t much time to prepare for the next game, a tough home matchup against No. 7 Maryland on Sunday in the Schott. That won’t be an easy chance for the Buckeyes to get back on track.

We all have faith that Alford will swing and miss on this one too.

Cade Stover outgrows linebacker, capable of big impact elsewhere
Why marquee matchups like Oregon are worth risk for Buckeyes
Advertisement