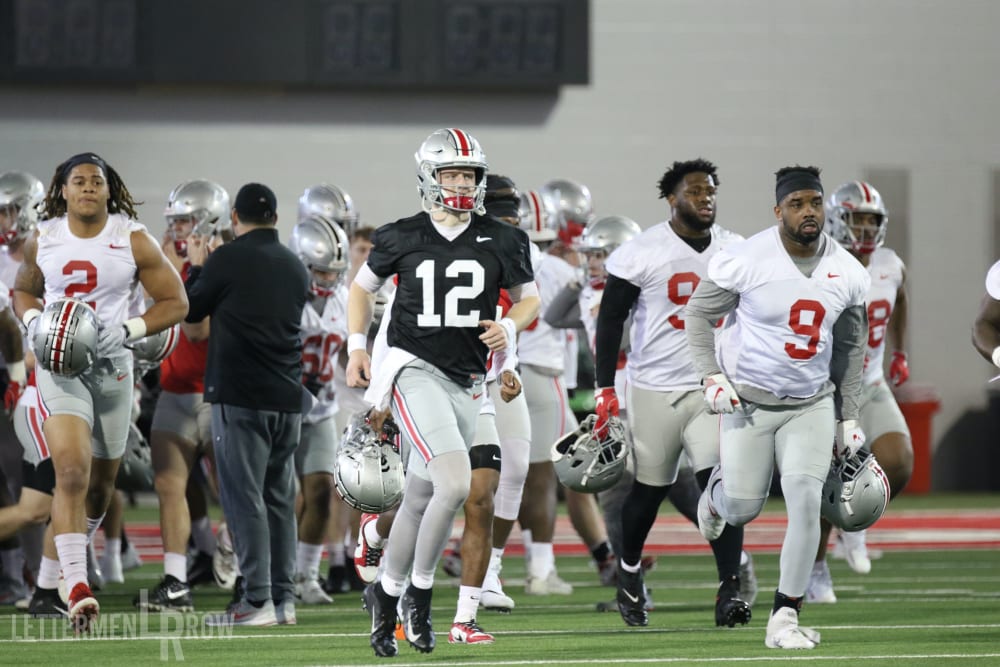 Ohio State quarterback Matthew Baldwin will be at the center of a quarterback battle this spring for the Buckeyes. (Birm/Lettermen Row)

Observations from the first practice of spring for the Buckeyes

Ryan Day strolled around the field, monitoring the entire field just like the old boss at Ohio State used to do.

His first spring practice leading the Buckeyes was underway, and it was clear from the start that he was no longer a coordinator as he gathered up the team and gave a quick speech to open the festivities.

There is a long way to go at Ohio State just this spring with 14 more workouts ahead of it just this month and in April. And even by the end of this stretch, Day isn’t likely to have a finished product on his hands with the two-time defending Big Ten champions.

But every season starts somewhere. And Lettermen Row senior writer Austin Ward watched the first hour of camp on Wednesday morning and came away with these observations.

This week on Lettermen Live presented by Byers Auto, former Columbus Dispatch and legendary Ohio State beat writer Tim May joins Austin Ward and Birm to look back at the first day of spring practice for the Buckeyes under coach Ryan Day, and provide a few observations from the open-practice viewing for the media Wednesday morning. The guys discuss the likely quarterback battle between Justin Fields and Matthew Baldwin, possible solutions to last season’s major issues on the defensive side of the ball and so much more.

Jaelen Gill looks like a breakout candidate for the Buckeyes

The list of guys to keep an eye entering the Woody Hayes Athletic Center on Wednesday morning didn’t necessarily have Jaelen Gill listed prominently. But bursts of electric athleticism are hard to miss, so the redshirt freshman made sure that he couldn’t be ignored as Ohio State opened spring camp.

The usual caveats apply here, and it’s always worth the reminder that one hour of practice without full pads on must be taken with a grain of salt. But it’s also true that few players did anything as memorable as snag a one-handed catch with a defender on his back or show the kind of burst at the line of scrimmage that Gill did during a head-to-head drill against an overmatched safety, and that should count for something. It’s too early to pronounce him as a surefire solution at H-back as Ohio State tries to replace Parris Campbell, but his potential certainly puts Gill in that conversation.

Lettermen Row senior writer Austin Ward details how the redshirt freshman is making strides already, and how there are still 14 more workouts ahead of him this spring and then all of training camp in August for him to prove that he’s ready to make the second-year leap for Ohio State.

J.J. McCarthy ready for next visit, Ohio DB on the rise

Ohio State will host quarterback J.J. McCarthy in late March for what could be a pivotal visit for the 2021 quarterback from Nazareth Academy (La Grange Park, Ill.).

“I can’t wait to visit Columbus in a couple of weeks,” McCarthy told Lettermen Row. “We’ll be there on Friday night [March 22] and Saturday. My entire family is coming with me unless my sister has cheer.”

McCarthy isn’t currently ranked on the 247Sports.com composite rankings because most sophomores aren’t ranked yet. But he’s approaching 25 early offers including Michigan, Northwestern, Wisconsin, Penn State and Ohio State. He’s still waiting on a potential offer from Notre Dame, but as buzz about a possible Irish commitment from top-50 prospect Tyler Buchner gets louder, it’s worth wondering if the Buckeyes could find themselves very comfortably in the driver’s seat for the 6-foot-2, 180-pound McCarthy.

Lettermen Row director of recruiting Jeremy Birmingham provides more on McCarthy and a full recruiting update in Wednesday’s edition of Dotting the ‘Eyes.

Add another ugly blemish to the resumé for Ohio State.

And maybe the Buckeyes might have a reason to start really worrying about an NCAA Tournament bid that a week looked like it had been sewn up.

Clearly coach Chris Holtmann’s team isn’t the same without Kaleb Wesson, and he’s now got consecutive road losses in the Big Ten that were equally damaging with the sophomore suspended — even if the margin of defeat wasn’t nearly as severe in the 68-50 defeat at Northwestern.

With the Wildcats mired in the conference cellar, the latest loss for the Buckeyes figures to be a much bigger problem come Selection Sunday now that there is only one regular season game and the conference tournament left on the schedule. Ohio State has another chance to bolster its case against Wisconsin, of course, but all the momentum is gone and the bubble could be about to burst.

What else was there to take away from that setback for Ohio State on Wednesday night? Lettermen Row senior writer Austin Ward is breaking it down with Three Points.