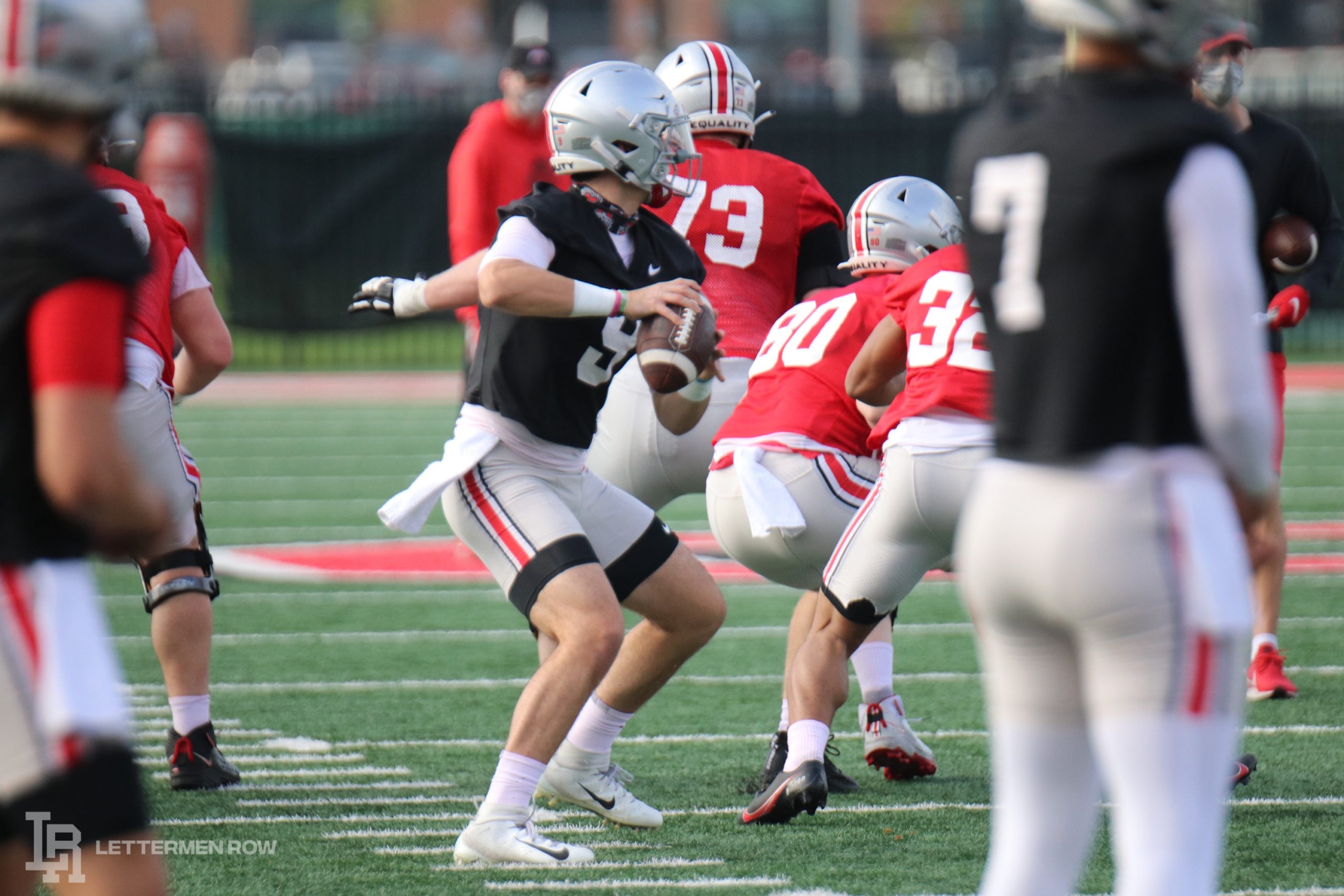 Jack Miller has a chance to show off his skill at the Spring Game. (Birm/Lettermen Row)

The quarterback battle is far from settled at Ohio State.

Second-year signal-callers C.J. Stroud and Jack Miller are both battling freshman Kyle McCord to be the next starting quarterback at one of the country’s premier programs. After the departure of Justin Fields to the NFL, the Buckeyes need to figure the position out moving forward to stay in the race for a national title.

All three are talented enough to take over for Fields. All three have a case to be made for winning the job. The Buckeyes have made sure to remain tight-lipped about the situation inside the Woody Hayes Athletic Center, but the annual Spring Game on Saturday could provide a glimpse of where things stand among the quarterbacks.

Last year’s Ohio State spring game was wiped out due to COVID-19. The last time the Buckeyes hosted their spring exhibition was in 2019, and that game marked another huge day for Ohio State quarterbacks. Making his Horseshoe debut, Fields struggled, sharing first-team reps with Matthew Baldwin. The game served more as a coming out party for then-freshman Garrett Wilson, who had a touchdown catch.

There are plenty of intriguing storylines beyond the quarterback job, but all eyes will be on the quarterbacks again Saturday for the Spring Game, as three talented signal-callers now audition to take over for Fields.

Rosters are set for Spring Game

The Buckeyes announced on Friday that they will have evenly-matched rosters for the first half, then a controlled scrimmage in the second for Saturday’s exhibition. The first half will feature two 10-minute quarters, while the second half won’t have a clock. With a handful of injuries, Ohio State will go at more of a thud temp with no full tackling.

Who will break out for the Buckeyes as they play in front of home fans for the first time in over a year? Which young Ohio State star will make big plays to carry momentum into the summer? How can the Buckeyes improve during a spring scrimmage with no tackling involved? The Lettermen Row staff made some of the boldest predictions yet to prognosticate what will happen during the spring scrimmage Saturday in Columbus.

Lettermen Row will be on site in the Horseshoe for wall-to-wall coverage of the Ohio State Spring Game between Team Brutus and Team Buckeye. Follow along on Twitter, Instagram and YouTube for experienced Ohio State coverage.