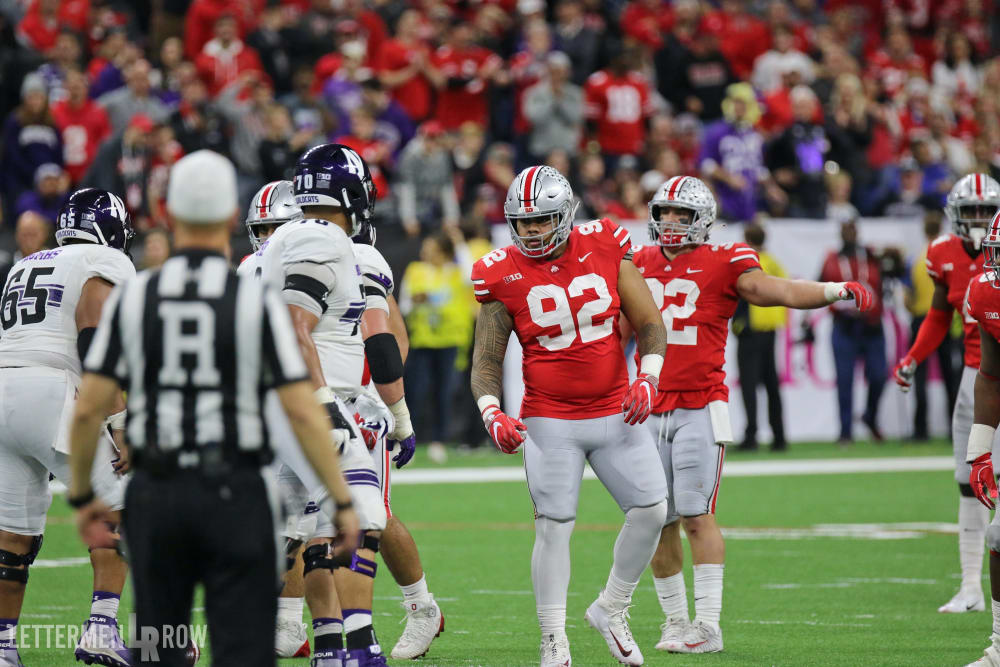 Ohio State may lose a few key pieces on the defensive line, but the Haskell Garrett and the Rushmen are poised to reload even stronger again. (Birm/Lettermen Row)

Look out, the Rushmen could be even more loaded next year

Heading into the spring, the Ohio State defensive line is tasked with replacing two potential first-round picks in Nick Bosa and Dre’Mont Jones while trying to meet the enormous expectations of the Rushmen under Larry Johnson. But once again, there’s a distinct possibility that the Buckeyes will absorb those losses and return next year even stronger with a group that has the potential to be the deepest, most talented the program has had under the legendary position coach.

“I’m really excited about next year,” Johnson said with a smile before the Rose Bowl. “We’ve got some great guys coming back, and then adding in somebody like Zach Harrison, that’s a piece we can use.

“I’m really excited with where we’re at.”

Maybe there won’t be three captains from the same unit again next season. But the culture, standard and legacy established by Ohio State wide receivers Johnnie Dixon, Parris Campbell and Terry McLaurin is going to live on thanks to the next wave of veterans behind them — and there just so happens to be another trio of seniors waiting for their turn to lead the way.

There won’t just be one guy taking the torch, which is exactly why the Buckeyes can once again look to Zone 6 as a group that can set the tone for the entire program. With Austin Mack already somebody who has earned respect in that room, K.J. Hill returning for another season after multiple years of production and Binjimen Victor committed to the cause for one more campaign, everything their predecessors and position coach Brian Hartline have worked to build is in good hands.

For more on the leadership filling the wide receivers room, check out Friday’s Question of the Day.

A look at the expected numbers for the 2020 class

Ohio State not going to sign more than 18 in 2019, and to do that they’re going to need to hit a grand slam with Enokk Vimahi this weekend and hope that they can hold on to Doug Nester for another two weeks while adding in Dawand Jones as well. That trifecta is hardly a foregone conclusion, and it could be more likely that the Buckeyes finish with just one of those three than landing all of them.

As of today, Ohio State has 18 seniors on its 2019 roster and is using 84 scholarships. So there are at least 19 players in the Class of 2020 coming its way. With usual attrition through early exits to the NFL Draft, medical hardships and traditional transfer routes, absolutely expect that number to grow to 25 or more.

And it’s a really good time for the Buckeyes to have a full, 25-or-more, class.

Birm breaks down the 2020 class, position-by-position, in Friday’s Recruiting Question of the Day.

Ohio State men’s basketball coach Chris Holtmann, as well as guards Justin Ahrens and C.J. Jackson met with the media Friday ahead of the Buckeyes trip to Nebraska for another Big Ten matchup. Holtmann’s squad is struggling, losing their fifth-straight game Wednesday night at home to Purdue after they began the year 12-1. Sitting at 11th in the conference, the Scarlet and Gray still look to be in OK position to make the dance but quickly have to get things figured out in order to make their outlook brighter.

The Buckeyes will try to get things back on track against the Cornhuskers at noon on FS1.