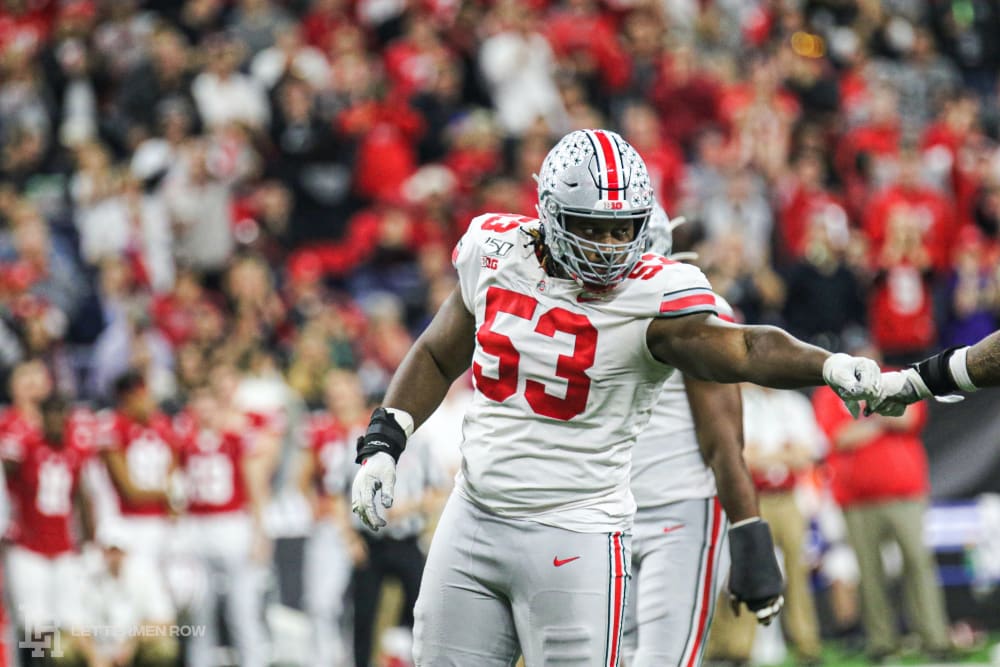 Davon Hamilton is one of the few Ohio State players who have played Clemson in their career. (Birm/Lettermen Row)

Ohio State not looking back at 2016 Fiesta Bowl loss

New Year’s Eve in 2016 was a long time ago, but Ohio State knows what happened that day. The Buckeyes were shut out by Clemson in the a College Football Playoff semifinal, which was at the Fiesta Bowl.

The two programs will meet again Dec. 28, but this figures to be a much different game. In 2016, the playoff committee put Ohio State in despite not winning the Big Ten, and Clemson hammered the Buckeyes. This Ohio State team is a lot different than that one, though.

New head coach and coaching staff, new players, new game plan. Ohio State will be ready for this edition of the College Football Playoff. And although it doesn’t care about that 31-0 beatdown because that game is in the past, it can be used for other purposes.

Whether it’s relevant or not, some guys from that team are still around. And it’s safe to assume they want some revenge on the Tigers. Maybe 31-0 doesn’t matter, but maybe it can be used as a little motivation in the buildup to the Fiesta Bowl.

Ohio State struggled against Jack Coan, Jonathan Taylor and Wisconsin’s offense in the first half of the Big Ten title game Saturday in Indianapolis. It was an oddity, as the Buckeyes have been great defensively all season up to that point.

After halftime, the Silver Bullets returned to form, shutting down the Badgers and sparking a huge comeback for a third consecutive Big Ten title. Oh, and they clinched a College Football Playoff berth. It wasn’t just a dominant singular performance by Chase Young or a key turnover by one of the talented guys in the secondary. Ohio State rallied as an 11-man defense to pitch a second-half shutout, while the offense finally starting looking like a juggernaut again.

What fueled the second-half surge from Ohio State in the Big Ten title game? How much have injuries and fatigue limited the Buckeyes down the stretch? Where will the challenge be moving forward in the College Football Playoff? Former Ohio State captain Zach Boren was back in the Lettermen Row film lab and answered those questions in the latest episode of BuckIQ.

Most of Ohio State’s 2020 recruiting class is complete. The Buckeyes have major pieces already locked down and ready to put pen to paper next week, opting to enroll early.

But the Buckeyes are hoping to fill one final piece this weekend, when 4-star quarterback C.J. Stroud, a Rancho Cucamonga, California, native, will take his official visit to Ryan Day and the program. Ohio State already has a 2020 quarterback committed, Jack Miller from Arizona, but the Buckeyes are thin at the position, so Stroud would be a huge get for the offensive staff.

Stroud visited Georgia earlier this season Michigan last weekend. But on the final weekend before signing day, the Buckeyes will get his final visit — and hopefully for them, a commitment from one of the top quarterbacks in the country.