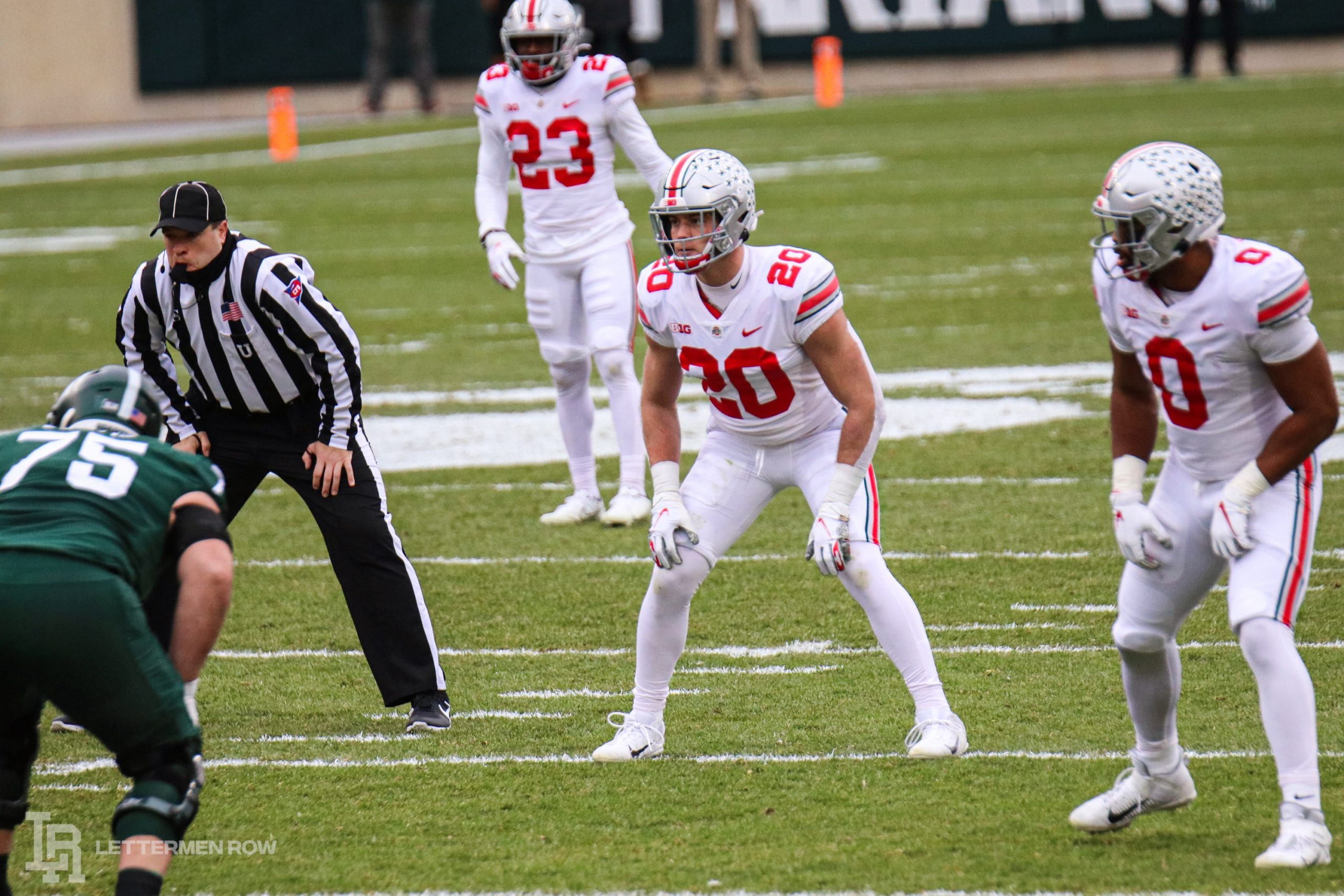 Ohio State linebacker Pete Werner is one of the best players available in the draft. (Birm/Lettermen Row)

Pete Werner had a chance to sneak into the first round of the NFL draft Thursday night. But after all 32 picks were made, Werner now falls into the second round, leading a talented group of Buckeyes still waiting to have their names called.

Werner should be taken Friday. So should offensive linemen Josh Myers and Wyatt Davis, linebacker Baron Browning and others who expect to have productive NFL careers. Werner leads them all into the second day of the draft.

“Pete Werner may be the most underrated off-the-ball linebacker in this year’s class,” Jim Nagy, the Executive Director of the Senior Bowl and an ESPN NFL draft analyst, said on Sportscenter last week before the draft began. “Extremely versatile, can cover, can stay on the field all three downs. Again, talking to teams, there are a lot of teams that have him in the late first round, so somewhere in that mid-20 to 32 range would not surprise me one bit if Pete Werner finds himself going on Thursday night.”

Werner didn’t get selected Thursday night, but he’s one of the best players available as the draft enters Round Two. And he should hear his name called early in the process on Friday.

Justin Fields taken by Chicago Bears in first round

Justin Fields spent two seasons terrorizing Big Ten defenses. Next season, he’ll be wrecking havoc in the NFC North. The former Ohio State quarterback was selected with the 11th overall pick by the Chicago Bears on Thursday night in the opening round of the NFL Draft. After being scrutinized for his play and character by draft experts for week, he was the fourth quarterback taken off the board.

The Bears traded up with the Giants to take the Buckeyes quarterback, who becomes the highest Ohio State quarterback taken off the board since 1982.

Fields, who transferred to Columbus after his freshman year at Georgia, immediately put Ohio State in the College Football Playoff picture. A heart-wrenching loss to the Clemson in the CFP semifinals as a sophomore fueled Fields this past season, and he led the Buckeyes to the national title game.

After two Big Ten titles, two College Football Playoff appearances, plenty of outrageous highlights and development under quarterback guru Ryan Day, Fields is now off to the NFL. And the Bears landed a steal with the No. 11 pick in the draft.

For more about the Bears taking Fields, click here.

Ohio State has two of its stars testing the NBA draft waters. Both E.J. Liddell and Duane Washington Jr. are going through the draft process and can still return to school if they choose.

That leaves Buckeyes coach Chris Holtmann and the rest of the program waiting for answers from their two best players, which isn’t an issue. It’s just an interesting waiting game for the Buckeyes. Lettermen Row’s Pete Nakos has more about the waiting game:

This year, due to the COVID-19 pandemic, the entire draft schedule is off. Draft prospects won’t be able to start their pre-draft process until late May or even early June because the NBA regular season isn’t set to wrap up until May 16, nearly a month later than normal. The NBA Draft Combine in tentatively scheduled from June 21 to June 27, but the event is subject to ever-changing public health conditions.

That leaves Buckeyes coach Chris Holtmann in a precarious position. He doesn’t want to put pressure on Liddell or Washington, rushing them to make a decision. Yet, he has to manage his roster. The withdrawal date of July 19, doesn’t give him much time to fill two roster spots if the duo both decide to continue the draft process.

For the full story about the wait and the future of the Ohio State basketball roster, click here.

Bears get steal, trade up for Ohio State star Justin Fields
Five Buckeyes who could be first-round NFL Draft picks next year