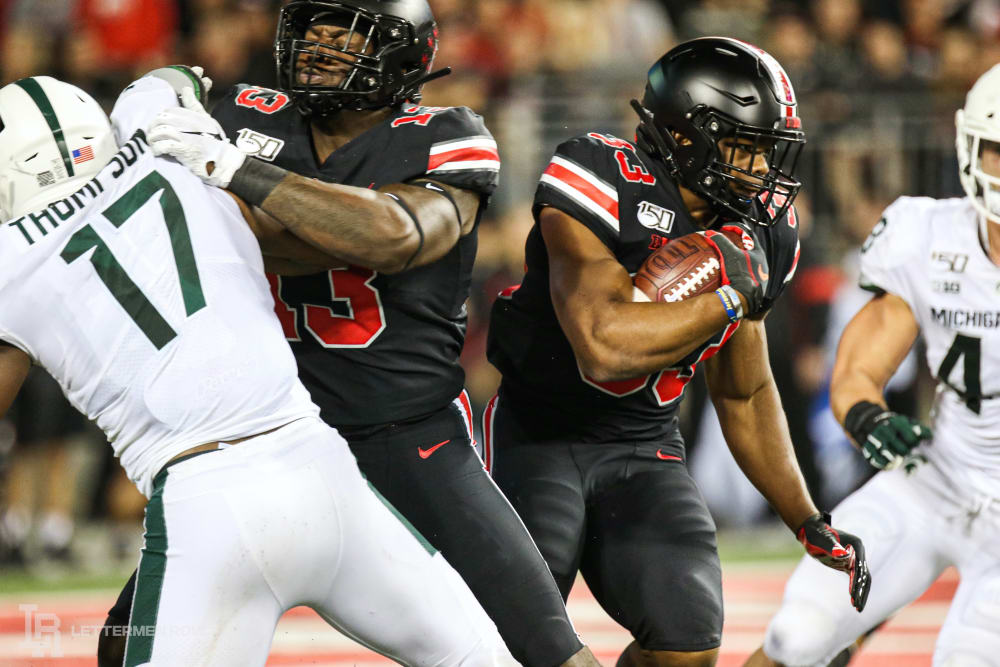 Following the Ohio State 34-10 win over Michigan State on Saturday night, the Buckeyes named champions from the game based on film grades.

The full list of champions can be found below:

Justin Fields jinxed by the media

Justin Fields had never thrown an interception in his college career — at Georgia and Ohio State — before Saturday night’s game against Michigan State.

The sophomore signal caller prides himself on taking care of the ball, and it hasn’t gone unnoticed. So last week, Fields was asked about his lack of interceptions.

Well, after his first career pick against Michigan State, Fields had a joke for the media.

“I have mixed emotions about it because it was my first pick, but it was also like, it’s football,” Fields said. “So it happens. I wasn’t really frustrated from it. I think you all jinxed me about it talking about it so much last week, but it’s all good. Just got to move on to the next game.”

Winning the game made it easy for Fields to make a joke about throwing his first interception. But the next-play mentality that came with the joke is a good sign for Ohio State, even after a turnover.

This week on Lettermen Live, Anthony Schlegel, Mike Doss and Tim May joined host Austin Ward to discuss Ohio State’s win over Michigan State. The group also previewed the remainder of the season.
The full episode can be found here.
Lettermen Live is now available on all major podcasting platforms, including Apple. Don’t have time to watch the full video? Give us a listen during your commute.

Check out the latest recruiting news

Ohio State is coming off a huge recruiting weekend, capped off by the 34-10 blackout win over Michigan State under the lights. Lettermen Row recruiting expert Birm has been on top of the latest recruiting news from the weekend, including information about the quarterback situation in the class of 2020, running back recruiting, new names and familiar faces.

Make sure to read the latest Dotting The ‘Eyes, which breaks down some key 2021 prospects and where the Buckeyes stand with them. Oh, and check out Talking Stuff, the new weekly recruiting update on Youtube, Apple Podcasts and Stitcher.