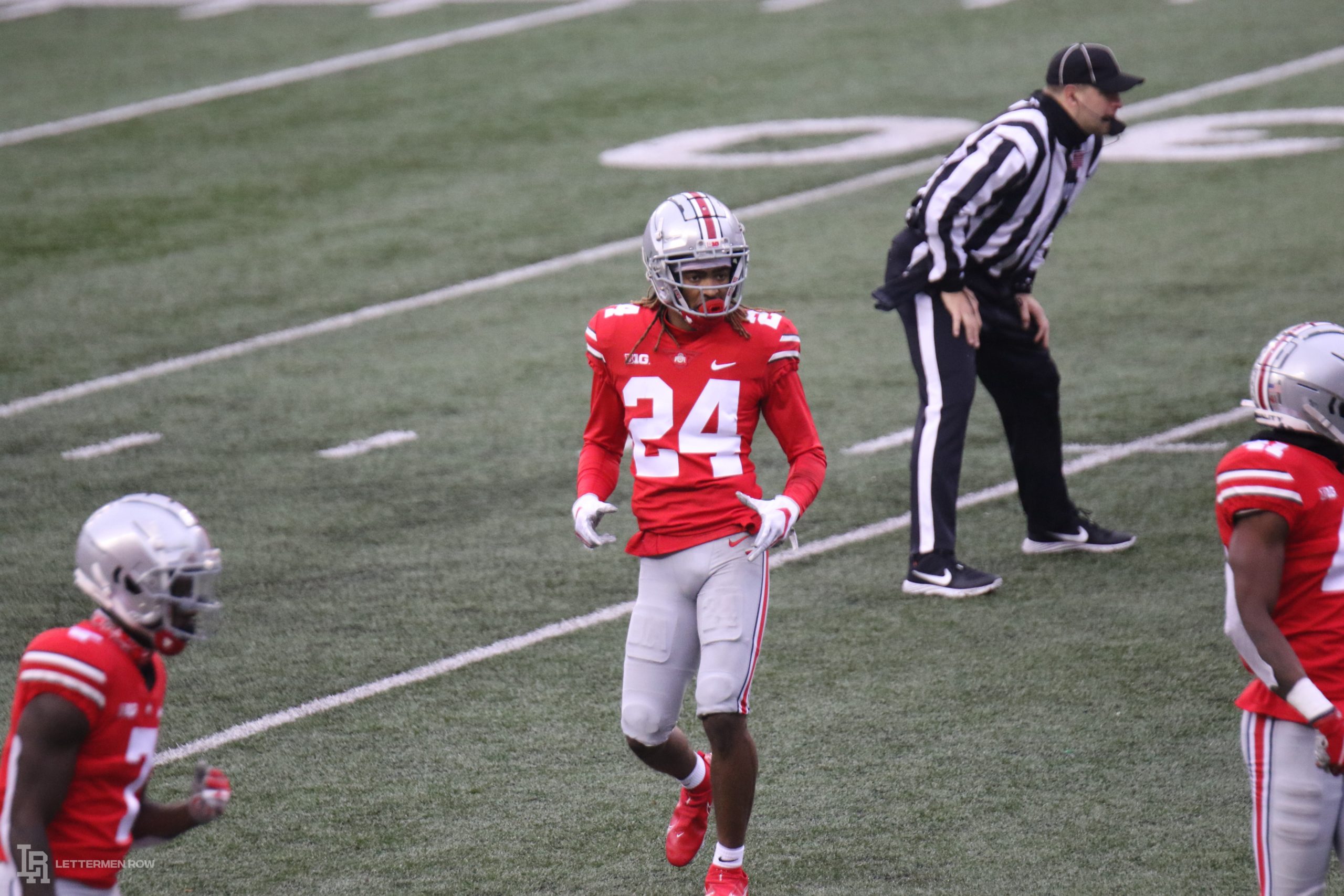 Shaun Wade could consider coming back for another Ohio State season. (Birm/Lettermen Row)

Would Shaun Wade consider coming back for Buckeyes?

Ohio State is just three days removed from losing in the national championship game to Alabama, but the focus has already shifted to finding out which of the playmakers from this team will come back for another shot at a title.

Shaun Wade, the all-American cornerback for the Buckeyes and potential high NFL draft pick, already bypassed the NFL once for a chance to win a title. Could he do it again and come back for another run?

Wade isn’t sure yet, but that conversation will certainly be had.

“I really can’t say,” Wade said after the title game. “You know, I do want to come back and everything. I’ve got to talk to my parents. It is upsetting that we got here and we just didn’t accomplish the goal, and that’s just been my goal, winning a National Championship and just winning big games like this. I’ll just go back with my parents, go talk to them and just go from there.”

If Wade were to choose to return for one more chance at a national championship, the Buckeyes defense would be due for a huge season.

Ohio State recruits at a level only matched by Alabama and a select few other programs around the country. So when the Buckeyes lost to Alabama in the national championship game, it served as a reminder that Ryan Day’s program had the talent to get to that moment this season, and the program will certainly continue to have talent great enough to get back to the championship game in the near future.

There’s no doubt that Ohio State is going to put itself in a position to return to the title-game stage. The level that the Buckeyes are recruiting means that nearly every single time they find the playing field, they’ll be the more talented team. That usually leads to wins and that means the opportunity for redemption doesn’t have to be far behind.

After being gashed for 52 points in the national championship game and giving up 400 yards passing for the third time this season, Ohio State has plenty of questions that will need answered on the defensive side of the football.

So what do the Buckeyes need to fix this offseason to improve the defense led by defensive coordinator Kerry Coombs? Are staff changes needed or were the defensive struggles just part of a weird year that was the 2020 season? Lettermen Row’s Austin Ward has more:

The Buckeyes could potentially benefit from a fresh set of eyes and new blood on the staff, and multiple Lettermen Row sources have indicated that veteran, respected co-defensive coordinator Greg Mattison could be set to retire after two years with the program. If that spot opens as expected, that creates an intriguing situation to revitalize the Silver Bullets — although it could also be a delicate one. Kerry Coombs is absolutely one of the best defensive backs coaches at any level in the sport, but Ohio State will have to decide if it still believes he should be the top coordinator after the dramatic statistical slide that followed the loss of Jeff Hafley last year.

For the full breakdown of the defensive issues at Ohio State this season and how they could be fixed, click here.

Which Buckeyes helped their cause in title-game loss to Alabama?
Why Shaun Wade should return once again for Buckeyes
Advertisement