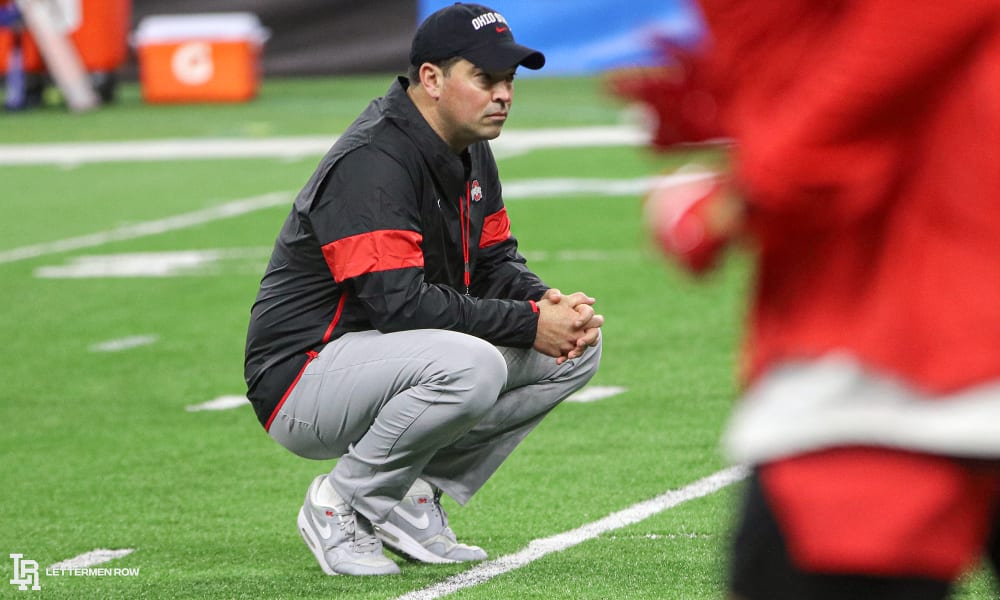 Ryan Day delivered a message about the coronavirus on Twitter. (Birm/Lettermen Row)

The coronavirus is having a major impact on the world of college athletics and the world in general.

So, as one of the most prominent faces in the state of Ohio, which has 88 confirmed coronavirus cases as of Wednesday, Ohio State football coach Ryan Day took to Twitter to release a message about public health and the fight against the spread of the coronavirus.

Day wasn’t alone. Basketball coach Chris Holtmann also released a video talking about the right things to do during the virus. His video is here.

Both coaches are active in the community and care about the health and safety of Ohioans — and they’d like to get back to work with their respective teams.

Replacing Chase Young won’t be an easy task for the Buckeyes in 2020.

Luckily, they have legendary defensive line coach Larry Johnson to help them find a way to be productive without one of the best pass-rushers in program history. This isn’t the first time Johnson and Ohio State will have to replace a dominant defensive end. They’ll find a way. But 2019 was a special year, when the Buckeyes had a program-record 54 sacks. How can they top that next season?

Lettermen Row looked at how that could happen:

It all starts with redshirt senior Jonathon Cooper, who was poised for a breakout year last season before an ankle injury derailed those plans and forced him to sit and focus on next season instead. He’ll be the leader, and if he can push between 10 and 12 sacks, it’ll be a good sign that the Buckeyes can push for the record.

From there, Tyreke Smith will need to stay healthy for a majority of the season, which he hasn’t been able to do in his Ohio State career. The potential is there, and he’s been talked about as the next great Rushmen by most of his teammates. Mix in a breakout season from Zach Harrison and plenty of help from Javontae Jean-Baptiste and Tyler Friday, and the Buckeyes could be ready to break that record.

The Buckeyes had their season cut short due to the coronavirus outbreak. They’ll always have to play the what if game to find out how their season would have finished. Could they have won the Big Ten Tournament and made a magical run in the NCAA Tournament? That will forever be an unknown for Ohio State.

Even though the season was cut short, the AP still released a final poll for the end of the season, and the Buckeyes ended their season as the No. 19 team in the country. Kansas finished No. 1, followed by Gonzaga, Dayton, Florida State and Baylor.

At one point during the season, the Buckeyes reached No. 2 in America, but a January cold spell saw them tumble out of the rankings. They steadily climbed back up them through February and into March.

Six Big Ten teams finished the season ranked: No. 9 Michigan State, No. 12 Maryland, No. 17 Wisconsin, No. 21 Illinois and No. 25 Iowa joined the Buckeyes.

The full rankings can be found here.