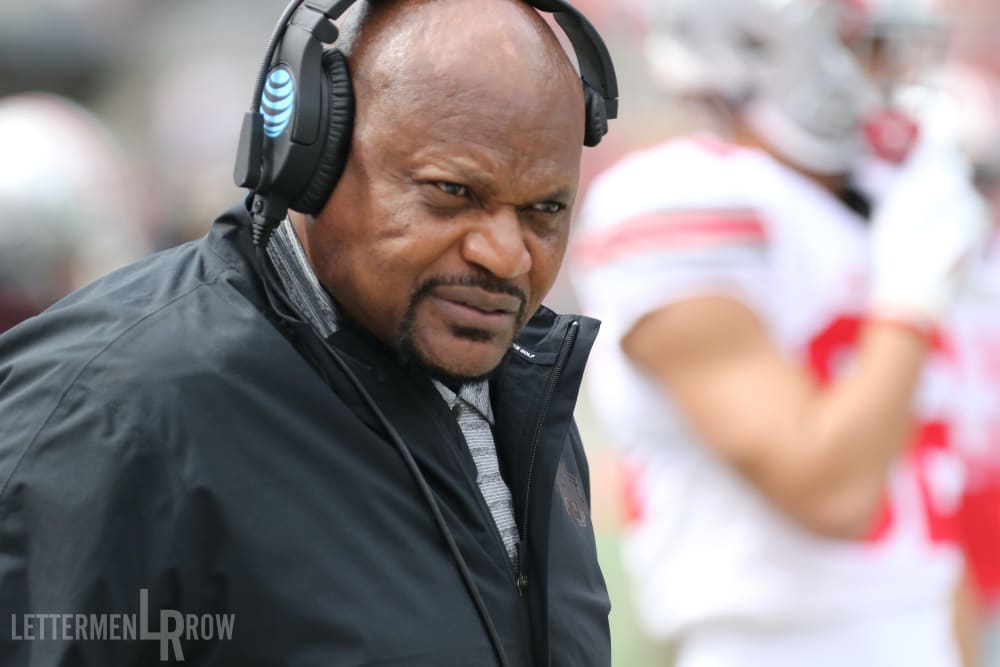 Ohio State defensive line coach Larry Johnson is one of the best recruiters in the country. (Birm/Lettermen Row)

Ohio State has become a pipeline for defensive linemen to get to the NFL. Legendary defensive line coach Larry Johnson has done an incredible job at keeping talent on the roster no matter how much turnover the Buckeyes face up front. It has become a tradition in Columbus.

The Buckeyes had a good 2019 defensive line haul, and they added a couple key pieces in the 2020 class. But the 2021 class could be the most important for the defensive line in some time, and that’s why Johnson and Ohio State are looking to make a massive splash on the trail in the coming months. There are so many names to know. Luckily, Lettermen Row recruiting expert Birm has all the angles covered. He’s tracking who Ohio State is seriously recruiting and who might be on the outside looking in. Part of the big board breakdown for the defensive line can be found here:

So when Lettermen Row talks about the Class of 2021 and its needs, it’s hard to look beyond the defensive line as the top priority for the Buckeyes. That’s why it was so vital for Ohio State to get off to a quick start at the position. With the early commitments from in-state stars Jack Sawyer and Michael Hall, Ryan Day’s program did just that.

With a likely need for four more defensive line prospects in the Class of 2021, two more at defensive end and two more at defensive tackle, the Buckeyes aren’t close to done at the key position in this recruiting cycle. Who are some of the biggest names still being courted by the legendary Larry Johnson and Ohio State?

The list is massive. Check out who the Buckeyes are targeting along the defensive line here.

On the latest episode of Lettermen Live hosted by Roosters, former Ohio State players Jake Stoneburner joined Austin Ward and Spencer Holbrook at Roosters on Olentangy River Road for a discussion about everything in the world of Buckeye athletics including the dismissal of Jahsen Wint and Amir Riep.

DC Defenders defensive lineman Tracy Sprinkle called into the show to break down the first two weeks of the XFL and why the Defenders are having so much success early in the season. Sprinkle talked about the fun of the league, the competitive nature, Cardale Jones’ play for the Defenders and much more.

It’s also a huge time for the Buckeyes on the recruiting trail, so Birm called in and gave a much-needed perspective on where Ohio State stands with key targets. Check out the latest episode of Lettermen Live.

The Basketball Tournament will return to Columbus this summer.

Carmen’s Crew, a team made of mostly former Ohio State basketball players, will defend its title in the Covelli Center on Ohio State’s campus on July 23-26. A The 64-team, $2 million winner-take-all tournament, TBT has played games in Columbus in previous seasons, but games will be played on campus at Ohio State for the first time.

Now the Columbus Regional will be held at Ohio State, and the Ohio State alumni team will begin its title defense on a home floor.

Should be a great DL haul in 2021. Needs to be to continue to stay in that top group come playoff time. Pivotal class all around as far as re-upping on defense. Future doesn’t really have too many question marks on offense.