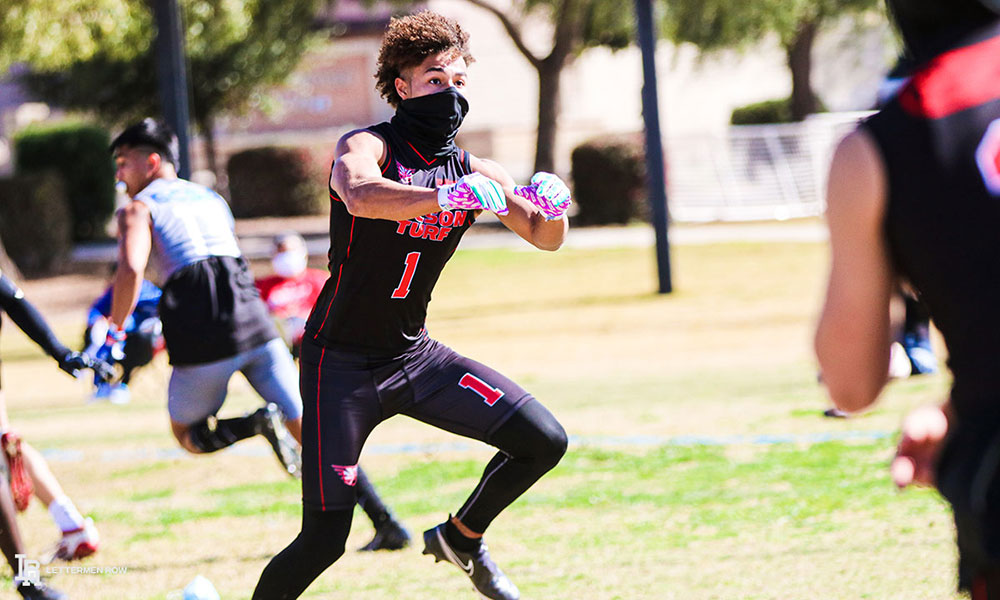 Ohio State commit Kyion Grayes will be in New Orleans for a camp. (Birm/Lettermen Row)

Ohio State can’t host recruits or their families for visits right now due to the ongoing NCAA dead period. But the recruits can still make trips to camps all over the country to compete with fellow high school players. Some of the best players in the country, some Ohio State commits and targets, will be in New Orleans this weekend for the Battle 7v7.

Newly-committed wide receiver Kyion Grayes, a four-star prospect from Arizona, will be on hand to compete in the event. As will four-star safety prospect and priority Ohio State target Xavier Nwankpa, who has the Buckeyes high on his list. Plenty of other talented high-school prospects the Buckeyes are looking at recruiting will also be there.

Lettermen Row recruiting ace Jeremy Birmingham will be in New Orleans for boots-on-the-ground coverage of the event and will share wall-to-wall accounts in the coming days. Stick with Lettermen Row for more updates on the camp.

Ohio State offensive line target, four-star Kiyaunta Goodwin, has dedicated himself to the weight room and improving his health to become a better football player. But he also has other motivating factors behind becoming the best player possible.

Lettermen Row recruiting guru Jeremy Birmingham spent some time with Goodwin to find out what motivates him, how he has transformed his body and much more. A peek at that can be found here.

Kiyaunta Goodwin is the youngest of four children. His mother Kimberly Durham has never failed to go out of her way to provide anything that her baby boy needed. Most of the time that meant special-order clothing, an obviously oversized food budget and anything else that Goodwin cared about.

That’s why he isn’t afraid to call himself a Momma’s Boy, and he doesn’t wear that title as an insult of any kind. Rather, it’s the fuel that fires him. The reason he’s committed himself to life and lifestyle changes that have turned him into not just a national football prospect but a story that’s bigger than his enormous frame.

Buckeyes favored at home over Illinois

Ohio State already has a huge win over Illinois on the road this season. But while the Buckeyes are currently on a three-game losing skid, the Illini are playing their best basketball and are coming off an upset win over Michigan.

Even with Illinois playing well, the Buckeyes are hard to beat at home. The No. 7 Buckeyes will enter their regular-season finale at home as a 1.5-point favorite over the visiting Illini, according to VegasInsider.com.

The Buckeyes had previously won seven-straight games before the current three-game losing streak. A win over No. 4 Illinois would improve the Buckeyes chances of landing a top-four seed in the Big Ten Tournament and a double-bye into the weekend next week. It would also help them in their pursuit of a No. 1 seed in the NCAA Tournament in two weeks.

The Buckeyes and Illini will tip off at 4 p.m. on ESPN.