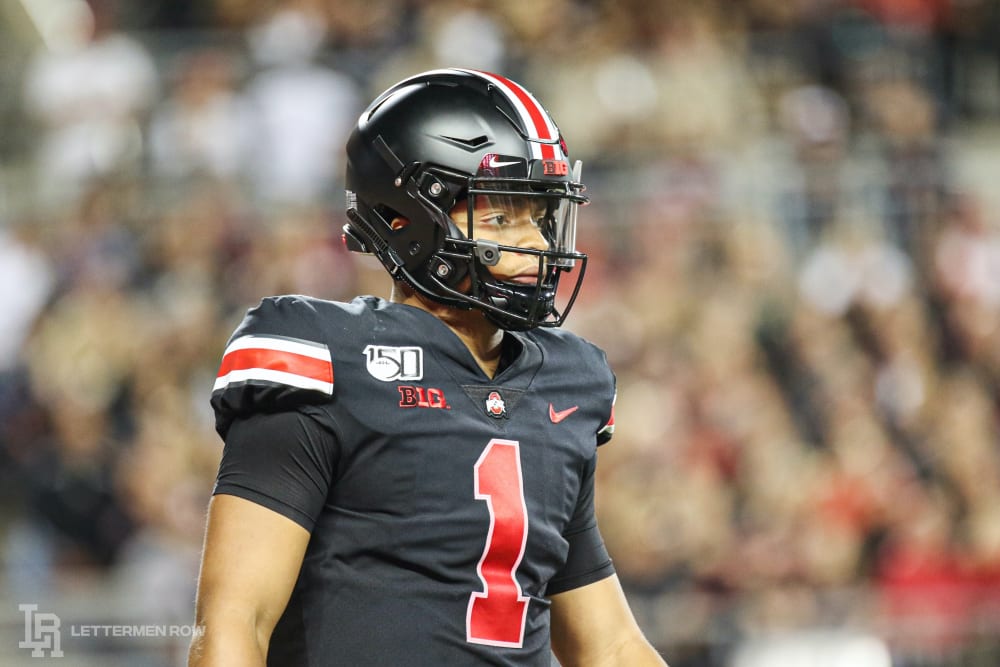 Justin Fields should be a first-round pick next spring. (Birm/Lettermen Row)

It’s never surprising to see Ohio State dominate NFL draft boards. After all, the Buckeyes have more first-round draft picks than any program in the history of the draft.

Next spring, the Buckeyes will likely build on that lead for the most first-r0und picks. At least according to one site, Ohio State should have at least three players hear their names called on the first night of the draft.

CBS Sports released a mock draft earlier this week, and it listed Shaun Wade, Justin Fields and Wyatt Davis all as first-round picks. With the stockpile of talent assembled at Ohio State, there could be more than three taken in that first night of the 2021 draft. The way one expert has it, three first-round picks will still be an impressive feat for the Buckeyes.

From the latest mock draft by CBS Sports’ Tom Fornelli:

Tim was also joined by Lettermen Row senior writer Austin Ward to further discuss what the football season could look like this fall and how the NCAA, conferences and schools could do it in a safe manner that still allows everyone to play. It won’t be normal, but there could be football in the fall.

There is growing optimism about a college football season happening, and they made sure to touch on what that season could include.

It’s all in the latest Tim May Podcast with special guest Urban Meyer.

Ohio State is one of the four finalists for the No. 1 receiver in the class of 2021, Emeka Egbuka. The Buckeyes also already have a commitment locked in from five-star quarterback Kyle McCord. Could McCord’s commitment sway Egbuka to join the class? Or could other five-star quarterbacks at Washington and potentially at Oklahoma impact Egbuka’s decision? Lettermen Row Director of Recruiting Jeremy Birmingham takes a closer look:

Having a star quarterback matters, especially when recruiting highly-ranked receivers. Each team recruiting Emeka Egbuka has one or more on their current roster or in their 2021 recruiting class. Does Egbuka have a better relationship with Caleb Williams than he does with McCord or Huard? Maybe he does, maybe he doesn’t. Does that hypothetically better relationship with a potential commitment outweigh anything else for an extremely intelligent prospect making the biggest decision of his young life?

Birm has the answers to those questions in his latest story here.