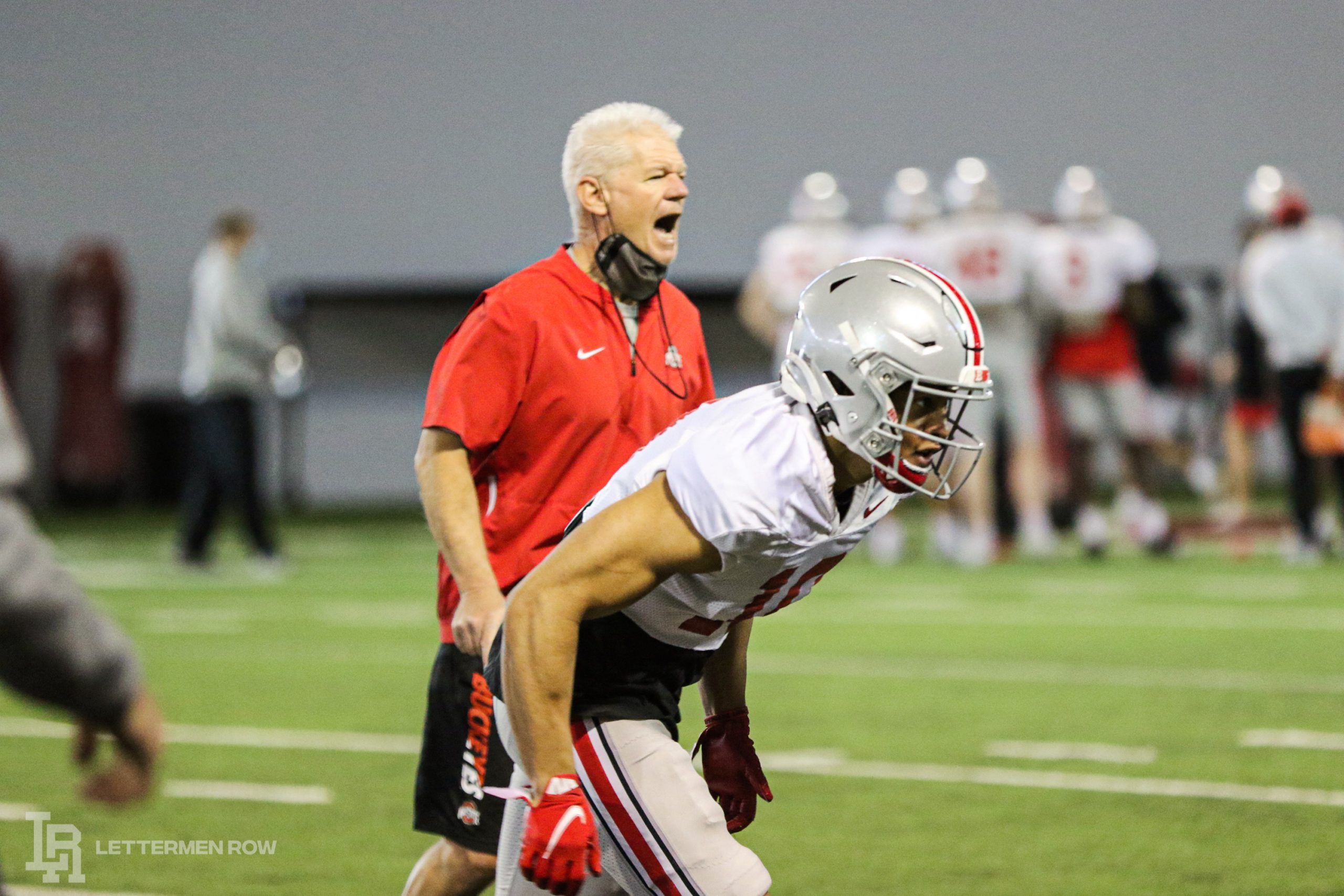 Ohio State has plenty to accomplish this week. (Birm/Lettermen Row)

Ohio State will have a scrimmage-style practice with full pads on Saturday. The buildup to that scrimmage has already begun.

The Buckeyes will ramp up practice in anticipation for the scrimmage, which will give some of the younger players a valuable chance to show they’re ready to take a step in their development toward playing time. With just two weeks until the end of spring practice, Saturday will be massive for the program.

“I’d love to just scrimmage every day now after watching the film for Friday,” Ohio State coach Ryan Day said. We’re going to stay with helmets, today we did. Tomorrow will be pads. Then we’ll go helmets on Thursday and then we’ll pad again on Saturday and just make sure those padded practices are just really physical and really clean. We’re going to do some situational stuff in the middle of the week and get into that scrimmage mode, tackle and that as long as we stay healthy going into the weekend.”

Of course, the scrimmage Saturday won’t be the deciding factor in anything, but it will serve as a big opportunity for young Buckeyes to show what they can do.

Ohio State is entering a crucial stretch of spring practice. Lettermen Live hosted by Roosters is here to break down every angle of it.

The spring depth at linebacker has taken another hit for Ohio State. One of the early head-turners in in camp, Mitchell Melton won’t get a chance to finish it after suffering an undisclosed injury and appearing on crutches during the open portion of practice on Monday morning. Ryan Day confirmed Melton’s absence for the rest of spring during his press conference on Monday.

The Buckeyes were already stretched a bit thin in the rebuilding project after losing four seniors in the offseason and having projected starter Dallas Gant on the shelf with a foot injury. And losing Melton for the final two weeks of workouts and potentially for an extended period of time with a “long-term injury” will only add to the degree of difficulty as Ohio State tries to establish a new pecking order for a unit of critical importance.

A spring setback generally isn’t a deal-breaker for Melton. But in this instance, it’s obviously not ideal for the Buckeyes considering the importance of the linebackers and the lack of experience currently available. Multiple sources have indicated to Lettermen Row’s Austin Ward that Ohio State is likely to pursue help at linebacker through the transfer portal, and the current situation for the program in that group highlights exactly why that would be a priority.