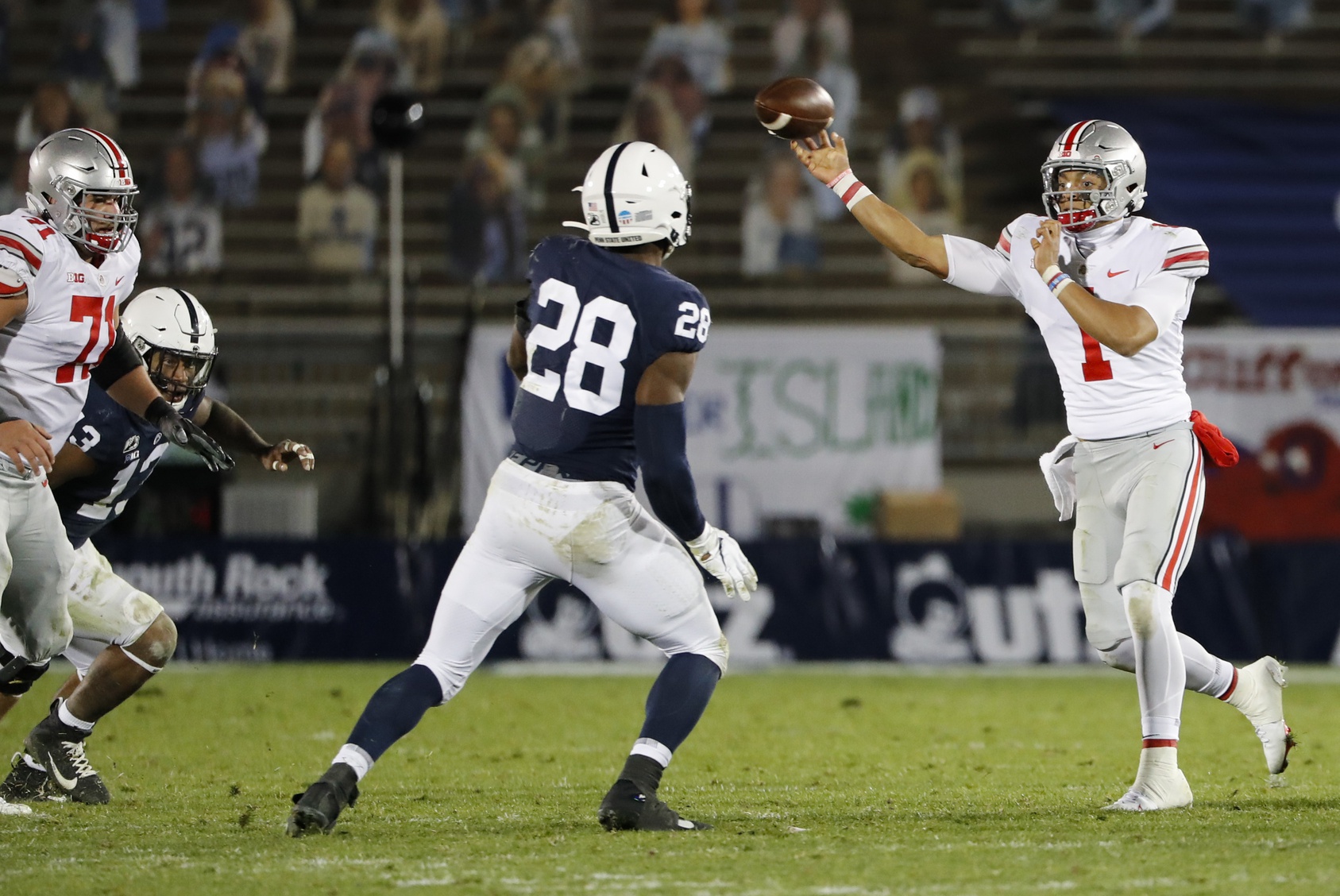 Who graded as champion in Ohio State win over Penn State?

Justin Fields is the best player in the Big Ten. And Monday, he was treated as such.

Fields was named the Big Ten co-offensive player of the week by the conference, splitting the honor with Maryland quarterback Taulia Tagovailoa. But Fields wasn’t the only Ohio State star to be given a Big Ten honor for the win over Penn State. Buckeyes defensive tackle Tommy Togiai was the Big Ten defensive player of the week after his three-sack performance Saturday.

Fields and Togiai led the charge on each side of the ball for the Buckeyes, but the football program named plenty of others champions for their efforts in the huge win at Penn State.

Cameron Brown to miss remainder of season with injury

A potential breakout campaign will have to wait for Cameron Brown at Ohio State.

The speedy Ohio State cornerback will miss the rest of the season after suffering a torn Achilles on Saturday in the win over Penn State, multiple sources confirmed to Lettermen Row senior writer Austin Ward. The junior went down with the non-contact injury while in coverage for the Buckeyes, and he’s scheduled to have surgery on Tuesday.

Brown was projected as a key part of a three-man rotation at cornerback heading into the season, building off the momentum from his steady work off the bench a year ago that proved he was on the right track in his transition from wide receiver. There hadn’t been many opportunities to make an impact yet for the Buckeyes through two games, though, chipping in just one tackle before taking on his rehabilitation assignment for the rest of the year and into the offseason.

Two weeks into the regular season, Ohio State appears to be ready for another run at the College Football Playoff, and Lettermen Live hosted by Roosters is back to break down every angle of the latest road win over Penn State.

Lettermen Row senior writer Austin Ward is joined by former Buckeyes Michael Bennett, Reid Fragel and Justin Zwick for a discussion about the Buckeyes huge wire-to-wire win over Penn State. The guys break down their biggest takeaways, the greatness of Ohio State’s offense and what the Buckeyes still need to improve on as they head into a four-week stretch of bad opponents. The panel also breaks down the upcoming home game against former Buckeyes defensive coordinator Greg Schiano and Rutgers.

Nicole Cox from Roosters also joined the show to give an update about how to safely watch the Buckeyes while enjoying Roosters this fall and give a game pick of her own for Saturday.

Lettermen Row Weekend Kickoff presented by Bryant Heating & Cooling Systems: The Whatever It Takes Pregame Show will be back at Urban Meyer’s Pint House this Thursday to preview the weekend full of college football games, including the Buckeyes upcoming home game against Rutgers.

The next edition of the show will be Thursday, Nov. 5 at 7 p.m., and there will be plenty of Ohio State guests on hand to break down the latest developments and preview the weekend of football ahead. Come out to see Bobby Carpenter, Zach Boren, Anthony Schlegel, Michael Bennett and other former Buckeyes greats give their insight about the upcoming games and how they think the Buckeyes will fare against Rutgers.