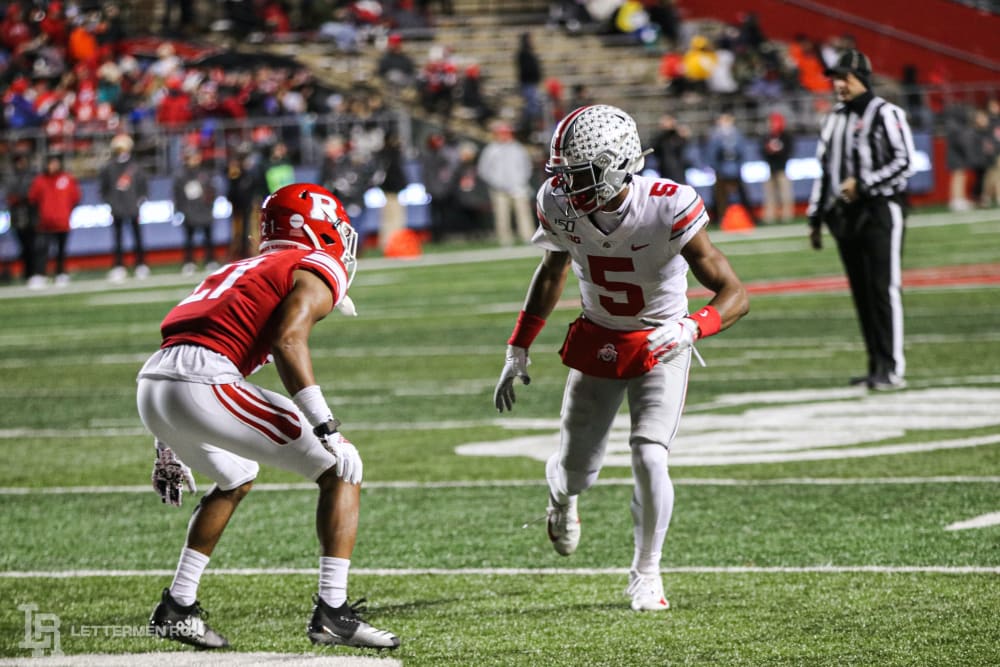 Garrett Wilson could have a huge season next year. (Birm/Lettermen Row)

Ohio State had an explosive offense in 2019 that featured weapons at every position.

And the Buckeyes are losing plenty of weapons, but the talent coming back — mixed in with the newcomers who enter the fold — seems to be in a good spot for the future. That’s especially true at wide out, where Garrett Wilson and Chris Olave are expected to be the best two options for Heisman Trophy contender Justin Fields.

Can they live up to the hype? Well, the wide receiver duo will need help from the four freshman wide receivers coming in or the unproven veterans who have sat the bench. Whatever happens, Wilson will be a huge part of the offense next season, and the receivers are already starting to build more chemistry with Fields early in the offseason.

From our own Austin Ward:

Wilson is already tapping into his outsized potential, of course. And 30 catches for 432 yards with 5 touchdowns is nothing to sneeze at for a true freshman — particularly one in an Ohio State offense that loves to spread the touches around at receiver.

It’s becoming clear that Wilson is truly a unique weapon at the position, and his workload only figures to increase with another offseason to get stronger in the weight room, another year of development with Brian Hartline and more chemistry with quarterback Justin Fields.

The best is yet to come with Garrett Wilson. And it’s going to be wildly entertaining to watch him develop.

On the latest episode of Lettermen Live hosted by Roosters, emeritus and fill-in host Tim May leads the discussion with a pair of former Buckeyes: Mike Doss and Justin Zwick.

The guys react to the news that former Ohio State defensive coach and player Luke Fickell will not be leaving Cincinnati for Michigan State like many thought he would. All the fallout and reaction from that is from three people who know Fickell, so don’t miss it. Then, Nicole Cox from Roosters joins the show to talk about the Buckeye Cruise for Cancer, which is coming up shortly. Nicole, Justin and Mike talk about what makes the cruise so special and why Roosters does the work it does for charity.

Lettermen Live is hosted by Roosters. Find the location closest to you here.

Birm sits down with Corey Dennis

Corey Dennis has been right there with Ryan Day since the head coach arrived in Columbus prior to the 2017 season. Most people just didn’t know it.

Dennis was a behind-the-scenes assistant in offensive meeting rooms and has been with the Buckeyes for the last four seasons. Now, he has a chance to step out and become a full-time assistant. Dennis, Ohio State’s new quarterbacks coach, knows he has earned this job promotion. He’s going to work hard to prove it, too. Day trusts him, and the two work well together. Now, it’ll just be in a different capacity.

What makes Corey Dennis feel so confident that he’s ready for this job? How will he make the job his own and what approach will he take on the recruiting trail? The young Buckeyes coach answers those questions and more as the latest guest of Birminology with Birm, exclusively on Lettermen Row.