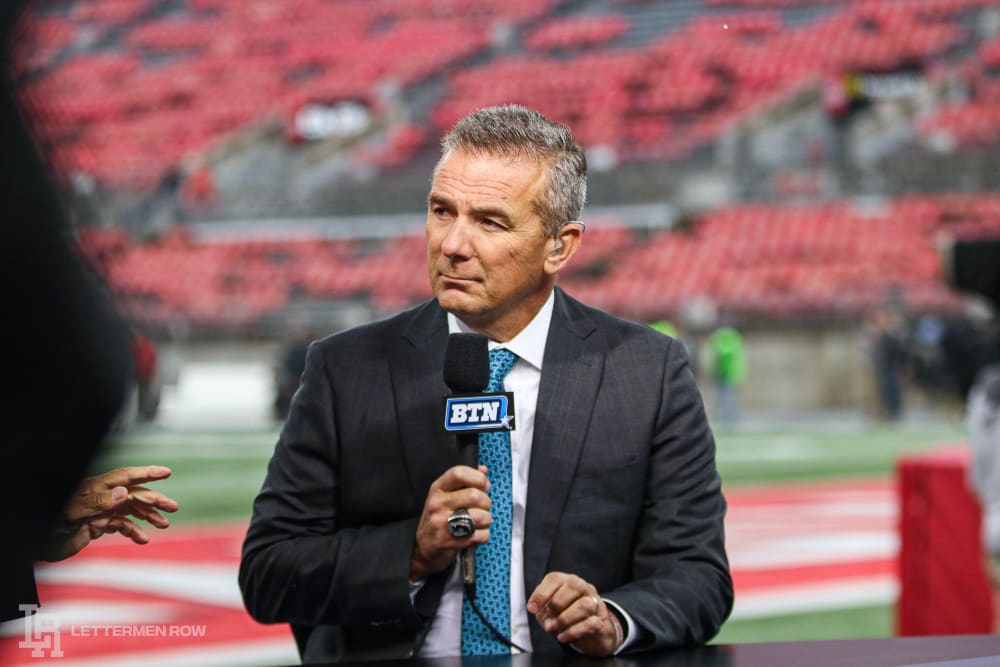 Urban Meyer has officially taken a job in the NFL. (Birm/Lettermen Row)

Does Urban Meyer heading to Jacksonville impact Buckeyes at all?

Former Ohio State coach Urban Meyer is officially out of retirement after two seasons away from football. The three-time national title-winning coach won’t be in the college ranks, and the Buckeyes won’t have to compete for the country’s top players against Meyer on the recruiting trail. He’s agreed to a contract to become the next head coach of the Jacksonville Jaguars and to try his hand at the NFL level.

The Jaguars made the move official on social media after the team fired head coach Doug Marone following a 1-15 season in Jacksonville. Shortly after making that decision, the hiring of Meyer away from his successful stint as a broadcaster was made official.

Lettermen Row sources have indicated to our senior writer Austin Ward that Ohio State is not expected to lose any coaches to Jacksonville. Multiple sources have also indicated that Mickey Marotti and Mark Pantoni are planning to remain with the Buckeyes.

Urban Meyer is beginning his next coaching move in Jacksonville. But as of now, his move to the Jaguars won’t have an impact on the Ohio State program.

On this week’s episode of Beanie and Cardale presented by Raising Cane’s, the guys recap the Ohio State loss to Alabama in the national championship game and look ahead into what should be a busy offseason for the football program.

Both guys talk about put the loss the Alabama, and the season as a whole, into proper perspective and break down every aspect of what went wrong for the Buckeyes in South Florida on Monday night. They also made sure to try answering the key question: Where do the Buckeyes go from here after the blowout loss in the championship game?

After committing to Ohio State before ever visiting the city of Columbus, five-star running back signee TreVeyon Henderson has been patiently waiting for his chance to check out the places he’ll spend the majority of his college life, the Woody Hayes Athletic Center. He’s taking it in stride, like he has everything else. No panic, no complaining. Henderson is just putting his head down and working, a trait that made him the country’s No. 1-ranked running back and also a personal favorite of Ryan Day’s in the 2021 recruiting class.

On the field, Treveyon Henderson is just as special as his ranking attests. There’s no reason — at least in his mind — that he shouldn’t compete for playing time right away at Ohio State. He’s motivated to help get the Buckeyes back to the national title game again next year.

What has Treveyon Henderson been doing to get himself ready? Who will be his college roommates? What question is he most glad he’ll not have to answer again anytime soon? The top-ranked tailback joined Birminology for a final time to talk about those things and more with Lettermen Row’s Jeremy Birmingham