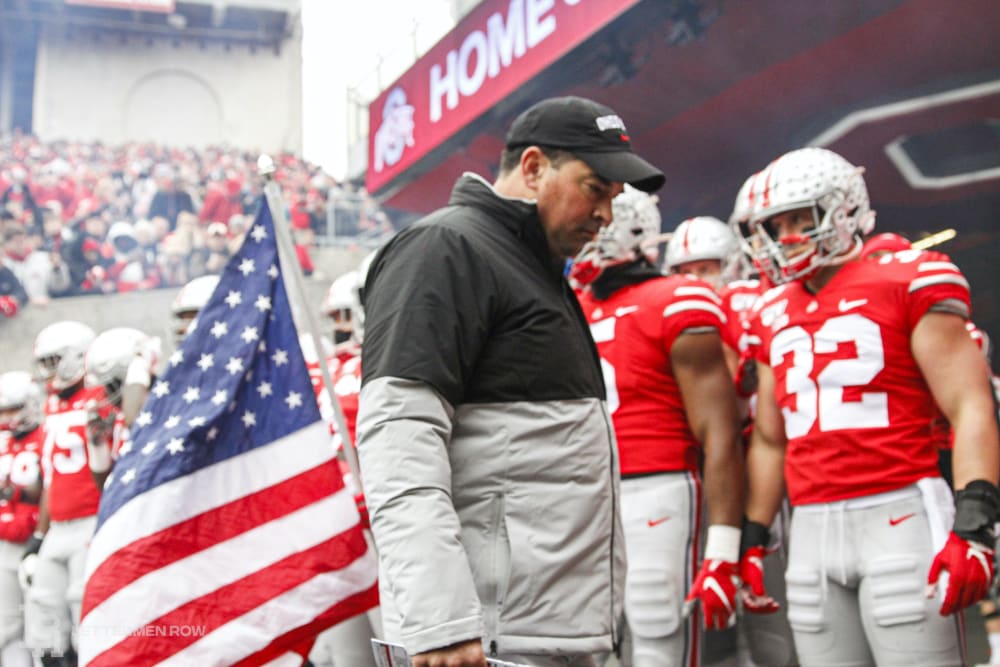 Buckeyes set to use local commits for national recruiting

Ohio State had a busy weekend on the recruiting trail. The Buckeyes didn’t even have to leave the state to find some success in the 2021 class. They earned yet another in-state commitment on Saturday, this time from Streetsboro defensive tackle prospect Michael Hall.

He’s one of the best defensive tackles to come out of the state in the last 10 years, and his commitment will help the Buckeyes expand their recruiting efforts to a national view now that they have six in-state commitments this early in the cycle. Lettermen Row recruiting authority Birm has the details of the strategy moving forward on the trail:

Now that Hall is committed, the Buckeyes are likely to start turning their focus to securing their primary out-of-state targets in this cycle. Six of the 10 Ohio State verbals in 2021 are from Ohio, and those six are all blue-chip talents. Yes, there are other in-state prospects who have been offered like Najee Story, Corey Kiner and A.J. Kirk. But there’s no real push from the Buckeyes for their commitments yet — and that absolutely wasn’t the case for Jack Sawyer, Jayden Ballard, Ben Christman, Reid Carrico, Jaylen Johnson and Hall.

That six-man group will serve as a welcoming committee for top targets all over the country who will make their way to Columbus throughout the spring and summer. And they will be pivotal as Ohio State drives toward another top-five recruiting class.

Now, the Buckeyes — and the rest of the teams in America — are in a recruiting dead period in which no visits can happen. This is the perfect time for Ryan Day and the coaching staff to schedule big weekend visitors throughout the months of March and April, when relationships start to form.

Is Ohio State basketball back on track?

The signs of a turnaround are starting to show for Ohio State. After a rocky January, the February edition of the Buckeyes finally seem to be back on the track they were on prior to Christmas.

They received good point guard play from CJ Walker. Role players such as Justin Arhens and Luther Muhammad contributed solid efforts. Even without freshman guard D.J. Carton, the offense appeared less stagnant than in recent weeks, and the ball ran though Kaleb Wesson the way Chris Holtmann wants it.

After two straight wins Including Saturday’s win over NCAA Tournament hopeful Indiana — there’s a certain sense of confidence exuded by the Buckeyes that was lacking in January. Maybe the home environment at the Schottenstein Center was just friendly to Ohio State for the win over the Hoosiers. Or maybe this is a turning point for a team that went from No. 2 in the country to unranked in just a few short weeks. The next few games in the Big Ten will tell that story.

Lettermen Row checked out Three Points on Saturday from the latest Ohio State win over Indiana. Click here to see the story.

Darron Lee didn’t get a chance to play in the Super Bowl for the Kansas City Chiefs.

But when the Chiefs beat the San Francisco 49ers in Miami on Sunday night, the inactive Lee, who didn’t appear in the AFC title game two weeks ago either, earned his first Super Bowl ring.

Lee won a national championship with the Buckeyes, so he has a championship ring to his name already. But now, he has one at both the college and pro level with the Chiefs 31-20 win for their first Super Bowl title in 50 years.

And even though he was inactive for the game, the ring will still mean the same: Lee is a Super Bowl champion.