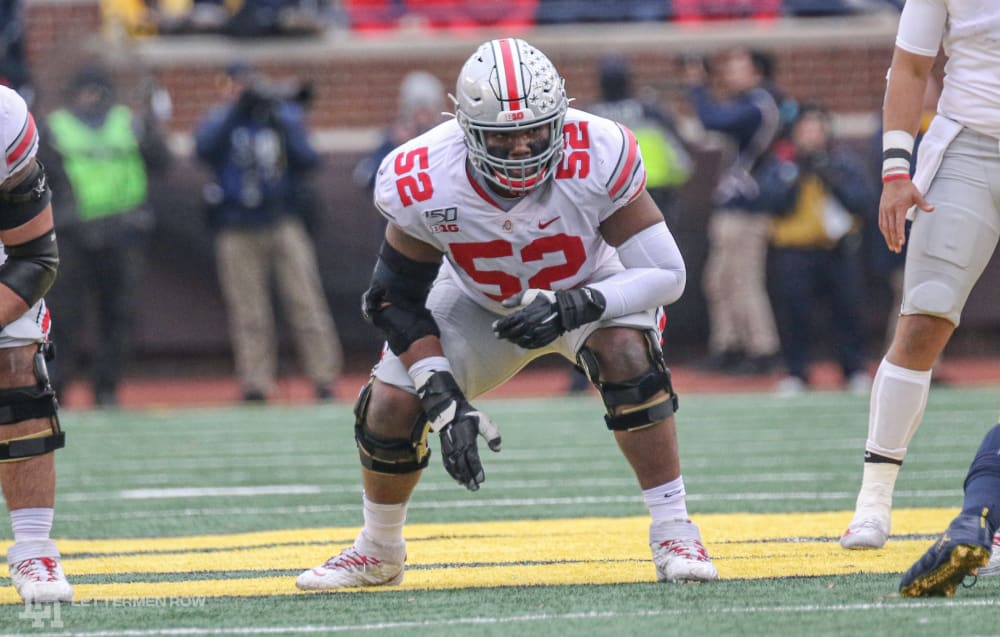 Wyatt Davis will be one of the best offensive linemen in the country next year. (Birm/Lettermen Row)

The preseason awards are beginning to roll in, and the Buckeyes are well-represented.

Three Ohio State players made the Walter Camp Preseason All-America team, which was released this week. Ohio State guard Wyatt Davis was listed as a first-team selection. He was an all-American last season for the Buckeyes.

Quarterback Justin Fields and cornerback Shaun Wade were both listed as preseason second-team all-Americans. Wade also made the Lott IMPACT Trophy watch list. That award is given to the best defensive player in the country at the end of the season.

Fields is currently the Heisman Trophy favorite, according to oddsmakers, so his appearance on the preseason all-America list is no surprise. But his second-team selection might be underselling his talent.

Ohio State should have one of the top five teams in the country this season, and the All-America list reflects that.

J.K. Dobbins was the centerpiece of the Ohio State running game last season. But now that he is off to the NFL, plenty of questions are left to be answered for the Buckeyes.

Ohio State earned a commitment from graduate transfer back Trey Sermon, who came from Oklahoma and will be expected to take over the starting job in the Buckeyes potent offense. Master Teague is coming off an injury, and he’ll need to be better than he was last season in the final few games, when he struggled. Ohio State has young backs ready to take the next step in the offense, too.

How will it shake out for Ohio State? Who will be the leading rusher? How good can Trey Sermon be? Lettermen Row laid out five bold predictions for the Buckeyes running back unit here.

TreVeyon Henderson committed to Ohio State without ever visiting the Buckeyes. The five-star back, one of the top at his position in America, had plenty of other schools he could have at least visited before committing to Tony Alford and the Buckeyes, but he didn’t make those trips. He is putting his faith in Ohio State.

Lettermen Row recruiting connoisseur Jeremy Birmingham has about Henderson’s decision. Part of it is here:

Ohio State recruited Henderson and his family with a three-pronged approach that included Tony Alford, Ryan Day and Al Washington — who actually opened the door for the Buckeyes because he was working on Henderson two years earlier when he worked at Michigan.

The Wolverines were expecting to get an official visit from TreVeyon Henderson in June. Michigan running backs coach Jay Harbaugh was very close to Henderson throughout the process, and he’s a coach who the 5-star talent still gives credit to for his incredible junior season. Breaking the news to Harbaugh was a difficult thing for the Virginia Player of the Year.