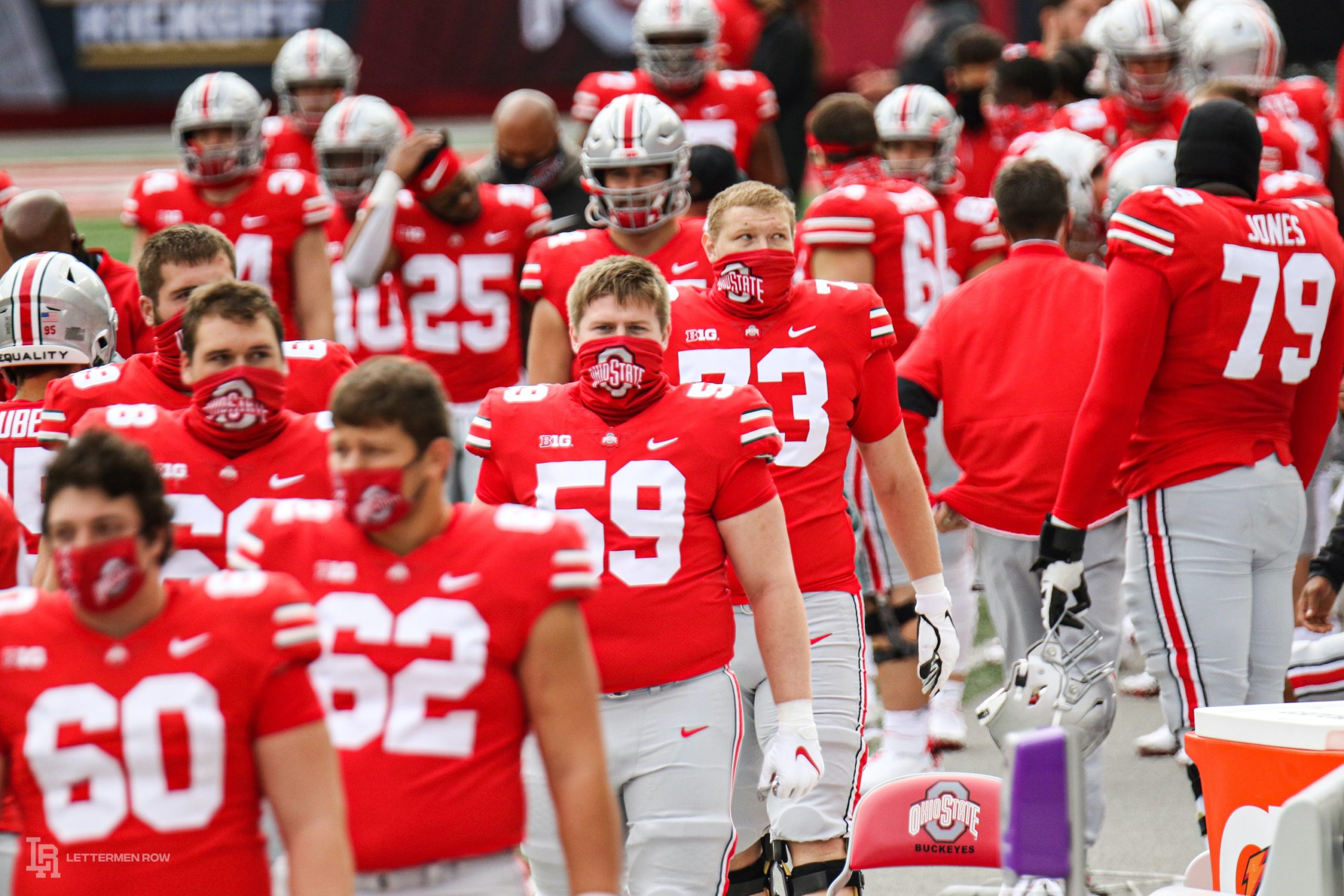 Ohio State had to make tough decisions about its travel roster. (Birm/Lettermen Row)

Ohio State will hit the road for the first time during this pandemic-shortened season this weekend, when the Buckeyes travel to Penn State for a huge primetime matchup.

It’s not like a home game, when more than 100 players can dress and be ready to go into the game. And it’s not like a normal road trip during normal times. The Buckeyes had to make tough decisions about who to include on their 74-man travel roster and take COVID-19 precautions into considerations when figuring out who to bring on the road.

“It’s a challenge,” Ohio State coach Ryan Day said. “It’s something that we have to make hard decisions on and figure out how to have depth. Maybe there’s times where a few more at one position or another or you’d like to reward someone for going on the road, but this comes down to flat numbers. If somebody tests positive tomorrow or Saturday and your team is already in State College, you may have a depth issue.

“We had to really make sure the numbers were balanced so we have a pair and a spare at every position. That’s not easy.”

The logistics of a road trip during the pandemic are different than usual. But so is everything else about this unique season. It’s just another detail the Buckeyes have to be sure of.

The newness hasn’t worn off yet, so that’s part of the appeal for Garrett Wilson.

Obviously it doesn’t hurt that the sophomore receiver is already making some big-time plays for Ohio State from the slot position either.

What makes Garrett Wilson such a matchup nightmare for Ohio State opponents? How has his move into the slot role for the Buckeyes clicked so quickly? Where can Wilson still become more dangerous for the program as his sophomore season progresses? Former Ohio State national champion Evan Spencer returned to the Lettermen Row film lab with Lettermen Row senior writer Austin Ward to answer those questions on the latest episode of BuckIQ.

After days of internet hints and rumors, the true heating up of the 2022 Ohio State recruiting class appears to be imminent.

Quinn Ewers, the nation’s top-ranked junior quarterback — and the No. 1-ranked player overall according to 247Sports.com — decommitted from Texas on Wednesday night, leading to a series of predictions from national recruiting analysts who now expect him to commit to the Buckeyes.

The news from the Southlake (Texas) Carroll standout Ewers was the big piece of the puzzle that had been hinted at all week long, but it was just one piece. Predictions have also come in Ohio State’s favor for 5-star defensive back Domani Jackson, fellow Texan and 5-star receiver Caleb Burton, 4-star defensive back Xavier Nwankpa and rumors are swirling around 5-star prospects Zach Rice and Will Johnson as well.

What’s the latest in the 2022 class? Lettermen Row’s Jeremy Birmingham and Spencer Holbrook break it all down in the latest edition of Talking Stuff: The Ohio State Recruiting Podcast presented by Byers Auto.