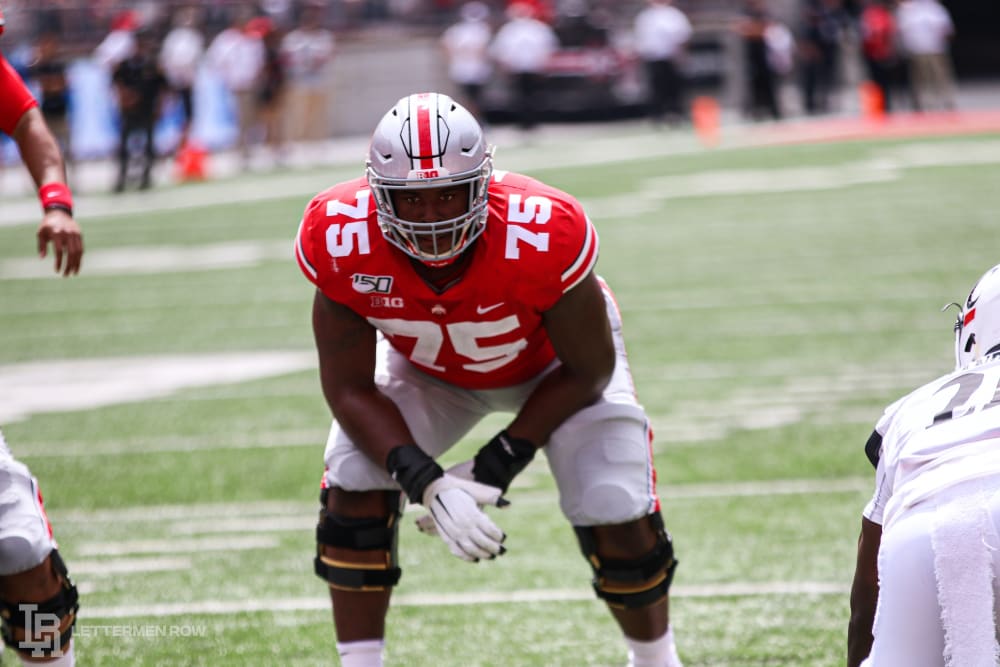 Thayer Munford will be a key for Ohio State this year. (Birm/Lettermen Row)

The buzz surrounding the open right tackle spot at Ohio State has been loud since last season ended in December. Thayer Munford, meanwhile, has the left tackle spot locked down, and he’s ready for a huge final season for the Buckeyes.

One of the best offensive lines in the country is replacing two starters. Josh Myers and Wyatt Davis return with Munford. Harry Miller seems to have a strong hold on the left guard slot. But the tackle positions carry plenty of intrigue.

The battle at right tackle is wide open.

“[Nicholas Petit-Frere]’s played a little bit for us,” Ohio State offensive line coach Greg Studrawa said. “And he’s got some experience, but what I saw out of Dawand [Jones] and Paris [Johnson], two young guys in three days of spring practice, I couldn’t believe it, how far Dawand has come and how advanced and mature Paris is for a freshman.”

Munford is already the proven starter at left tackle. And he’ll be a key for the Buckeyes. The tackles are two of the most important positions on the roster, and the Buckeyes have plenty of intrigue surrounding the tackles heading into the summer.

The Buckeyes added four new commitments in April, two in the 2021 class and two in the 2022 class. They were able to kickstart the 2022 group, which was one of the goals that Lettermen Row had initially pegged as a need for March before that effort was slowed down a touch by the coronavirus pandemic.

Overall, April was successful despite the lack of visitors and spring game due to the pandemic. Ohio State wasn’t able to see any recruits face-to-face, but the Buckeyes made the most of a bad situation for all of college football and turned in a successful month on the recruiting trail.

Lettermen Row’s Jeremy Birmingham broke down the list of goals for the Buckeyes at the beginning of the month, and he made sure to go back over the list to see if the Buckeyes accomplished what they needed to over the last month. For that, click here.

Lettermen Row cohorts Austin Ward and Jeremy Birmingham spend plenty of time talking about Ohio State football. But their conversations away from the office can veer in wild directions.

That’s why Lettermen Row’s Road Beers show is all about things aside from Ohio State football — most of the time. This week’s episode is about candy crush, Birm wearing flip flops and cereal brands. Those topics were plenty of fun. The show is also about former Ohio State football coach Urban Meyer, who elevated the program over his historic tenure despite only winning one national title. The guys broke down his legacy and more.