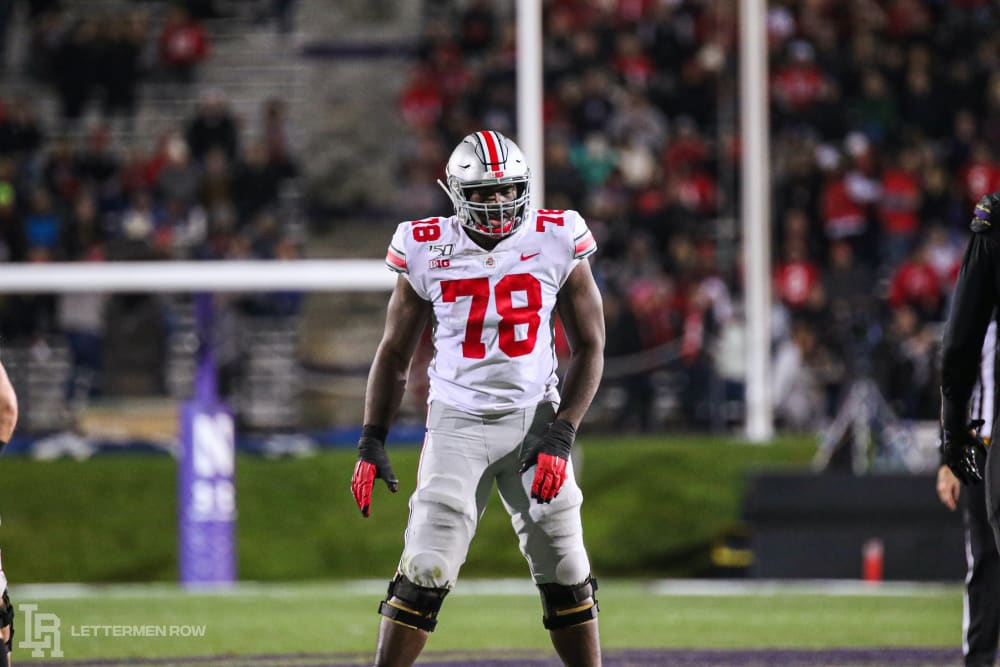 Nicholas Petit-Frere has a chance to become a starter for the Buckeyes. (Birm/Lettermen Row)

Nicholas Petit-Frere hasn’t had a chance to live up to his former five-star recruiting status yet. But his Ohio State career seems to just be getting started.

The third-year right tackle is the favorite to win the open slot at that position, and he’s come a long way to earn it — if he can lock it down. Petit-Frere has bulked up to 310 pounds — up significantly from where he was in the past — and he seems to finally be up to a weight the Buckeyes expect from their tackles. He’s still locked in a position battle with Paris Johnson, another five-star recruit, but Petit-Frere’s time is now.

“Both are very, very talented,” Ohio State coach Ryan Day said. “Until you put pads on, it’s hard to tell with an offensive lineman. But I’ve been very, very impressed with both of them for different reasons. Nick had a tremendous offseason. His body weight is as strong as it’s ever been. I think he had a great offseason — he’s strong, really looks like a different person. I’ve been impressed with Paris in the short time he’s been here, his attention to detail and the work he’s put in to get where he’s at right now. We’ll get a better idea once the pads get on, but both look really good.”

With more weight on and more experience added, Petit-Frere can finally become a starter for the Buckeyes. For more on that, click here.

Ohio State wants a season, and its players are speaking up to try to ensure one.

During one of the busiest weeks of these unprecedented, uncertain times, the Buckeyes capped it on Friday by releasing a letter that addressed almost all of the factors that have risen to the forefront when incomes to playing games this fall.

The option to opt out, the COVID-19 safety protocols, player exploitation were all tackled in a social-media post shared by three-time captain Tuf Borland, backing up similar public comments that teammate Josh Myers made earlier in the week about why the Buckeyes feel comfortable proceeding with a season.

The Buckeyes doubled down on that with a letter collectively signed by the athletes on campus. Read it in its entirety here.

The recruiting dead period is still holding back the 2021 class, but Talking Stuff: The Ohio State Recruiting Podcast still has plenty to discuss.

Lettermen Row Director of Recruiting Jeremy Birmingham and Spencer Holbrook are back to break down the latest on four-star safety Derrick Davis and where the Buckeyes stand in his recruitment as it winds down.

They also choose whether primary Buckeyes targets are going to be in the historic recruiting class or on the outside choosing a different school.

It’s another loaded episode, and it’s all presented by Byers Auto.