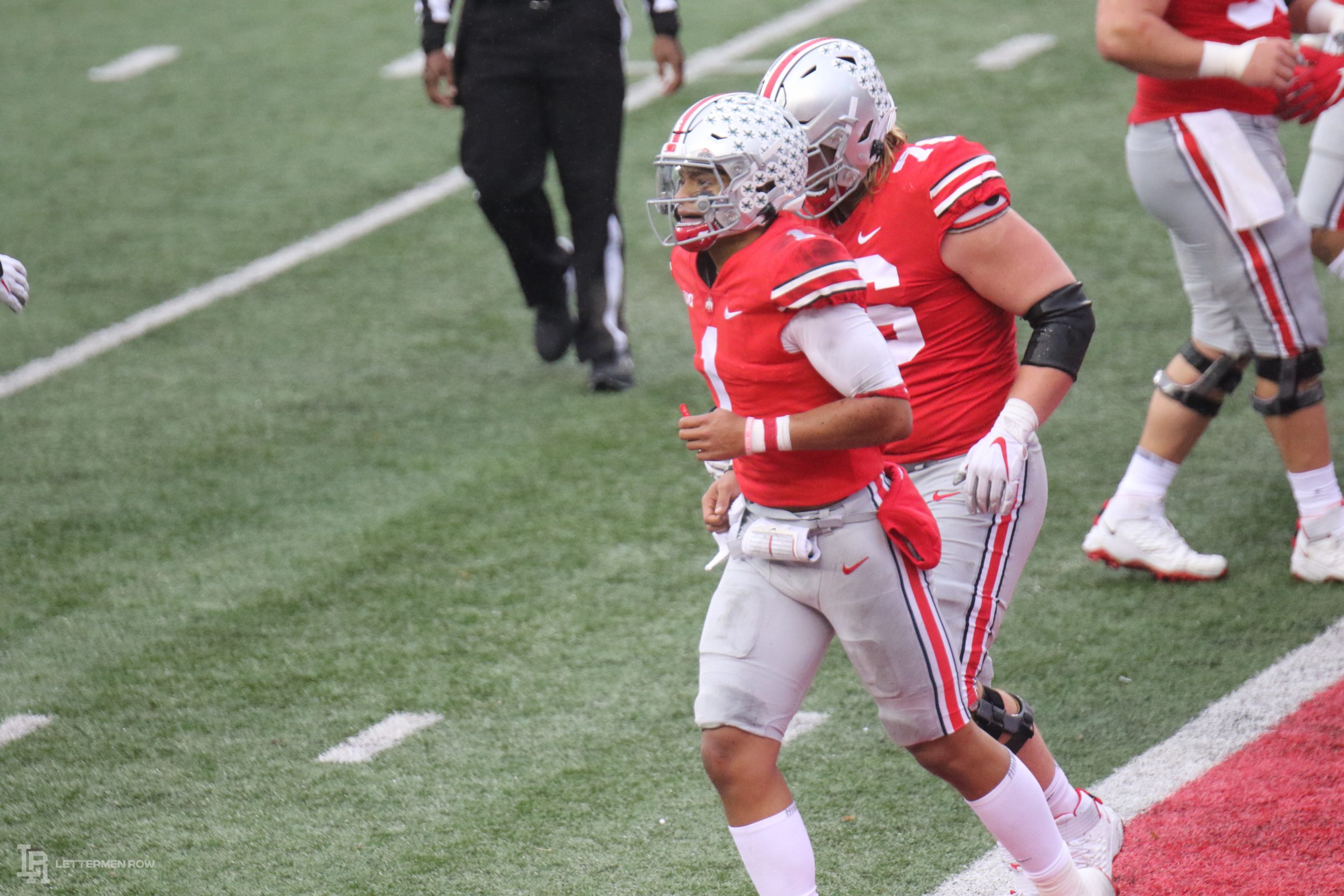 Justin Fields and the Buckeyes are making their final preparations for the trip to Illinois. (Birm/Lettermen Row)

Even in a win over a top-10 team in which it had a 28-point lead at one moment in the game, Ohio State didn’t seem satisfied with the way the win over Indiana finished up last week. And now, the Buckeyes are a day closer to stepping on the field once again to prove they are one of the top teams in the entire country.

The Buckeyes were inside the Woody Hayes Athletic Center this week making preparations and changes for the upcoming matchup at Illinois, a game that has become more interesting in the last two weeks after back-to-back wins by the Illini after an 0-3 start. The 4-0 Buckeyes certainly won’t take Illinois lightly this week.

As they make their final preparations to head to Champaign, the taste of the second-half performance against Indiana is likely still fresh in the mouths at Ohio State. That could mean bad news for the Illini.

The group discusses the latest College Football Playoff rankings, where the Buckeyes should be ranked and compared to the other top teams in the country, Ohio State’s suspect defense, the Buckeyes matchup with Illinois and, of course, game picks for all the biggest games this weekend.

The next edition of the show will be Thursday, Dec. 3 at 7 p.m., and there will be plenty of Ohio State guests on hand to break down the latest developments and preview the weekend of football ahead, including the Buckeyes game against Michigan State. Come out to see Bobby Carpenter, Zach Boren, Anthony Schlegel and other former Buckeyes greats give their insight about the upcoming games and how they think the Buckeyes will fare against the Spartans.

Get set with the panel of former Buckeyes with analysis, stories, delicious food from Urban Meyer’s Pint House in Dublin and some cold Coors Light. Don’t miss the next show next Thursday at 7 p.m.

Ohio State is gaining massive momentum in the 2022 recruiting class already. With nine commitments, including three five-star players, the Buckeyes class seems to be about 1/3 filled up. But what Ryan Day and the Buckeyes don’t have so far is a commitment from any defensive linemen. That’s because the approach to recruiting that position is different than others, and Larry Johnson wants to take his time.

Guys like Caden Curry and Travis Shaw have not been able to make the trip to Columbus that they’d like to. Larry Johnson’s always been one to handle recruiting differently, and the pandemic has helped the Buckeyes plans to remain even quieter than normal. Johnson’s approach is one of very real relationship development and one that focuses on player development based on in-person evaluation. Losing last summer’s camp sessions certainly didn’t help the Buckeyes legendary line coach, but like most coaches around the country, he’s adjusting to new methods of communication while also keeping the focus where it’s needed most right now — on the Buckeyes 2020 national championship pursuit.

For the full story about the 2022 defensive line recruiting, check out the story from Birm here.