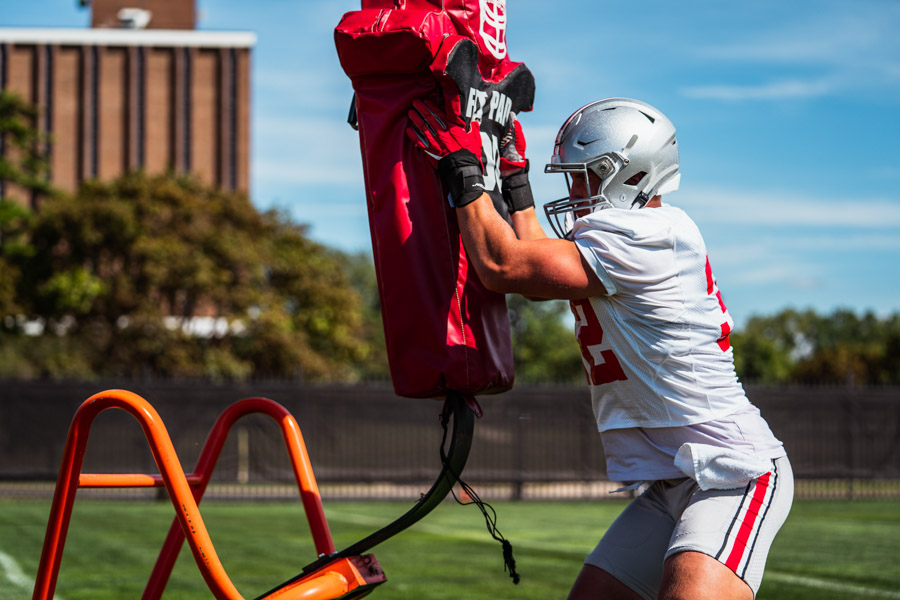 Ohio State has one of the most loaded rosters in college football.

After falling to Clemson in last season’s CFP semifinal, Ohio State has plenty of motivation to reach the playoff again. ESPN’s Playoff Predictor currently gives the Buckeyes a 69 percent chance to make the College Football Playoff after their eight-game regular season and eventual Big Ten title game. Those are the best odds in the country. Alabama has the second-best odds to make the playoff, with a 68 percent chance, while Clemson has a 67 percent chance.

Fellow Big Ten power Wisconsin has a 40 percent chance to make the CFP, the fourth best odds and second best in the league. Penn State has the seventh-best odds with a 22 percent chance to reach the Final Four of college football.

But the Buckeyes are alone at the top with the best opportunity to get back to the playoff and have a chance to win the national title.

Ohio State linebackers coach Al Washington and returning starters Pete Werner, Tuf Borland and Baron Browning held a press conference to update their preseason progress Thursday afternoon. Lettermen Row had the live stream, but if you missed the interviews with the Buckeyes, make sure to check them out.

And be sure to check out the Practice Report presented by Byers Auto, with analysis of the interviews and a breakdown of the linebacker position for the Buckeyes. The discussion between Austin Ward, Jeremy Birmingham and Spencer Holbrook breaks down every angle of the Ohio State linebacker room.

Ohio State is expected to have another strong recruiting class in the 2022 cycle. And the Buckeyes already have a head start at defensive back; four-star cornerback J’yaire Brown is committed to Kerry Coombs in the secondary. Now that they already have one defensive back locked into the class, the Buckeyes can be patient and identify who they truly want for the secondary in the class of 2022.

Ohio State really likes J’yaire Brown, obviously, and identified him early before taking his commitment in April. With Brown in the fold and six commitments in the secondary in 2021, there’s no need to rush into anything with other players.

There are some players out there, like California’s Domani Jackson and Michigan’s William Johnson, who would be takes no matter what right now. But both of those players are long-shots right now, and the odds get even worse the longer the recruiting dead period extends. The same can be said for Denver Harris, who has not shown much reciprocal interest in the Buckeyes at this point, according to sources there.