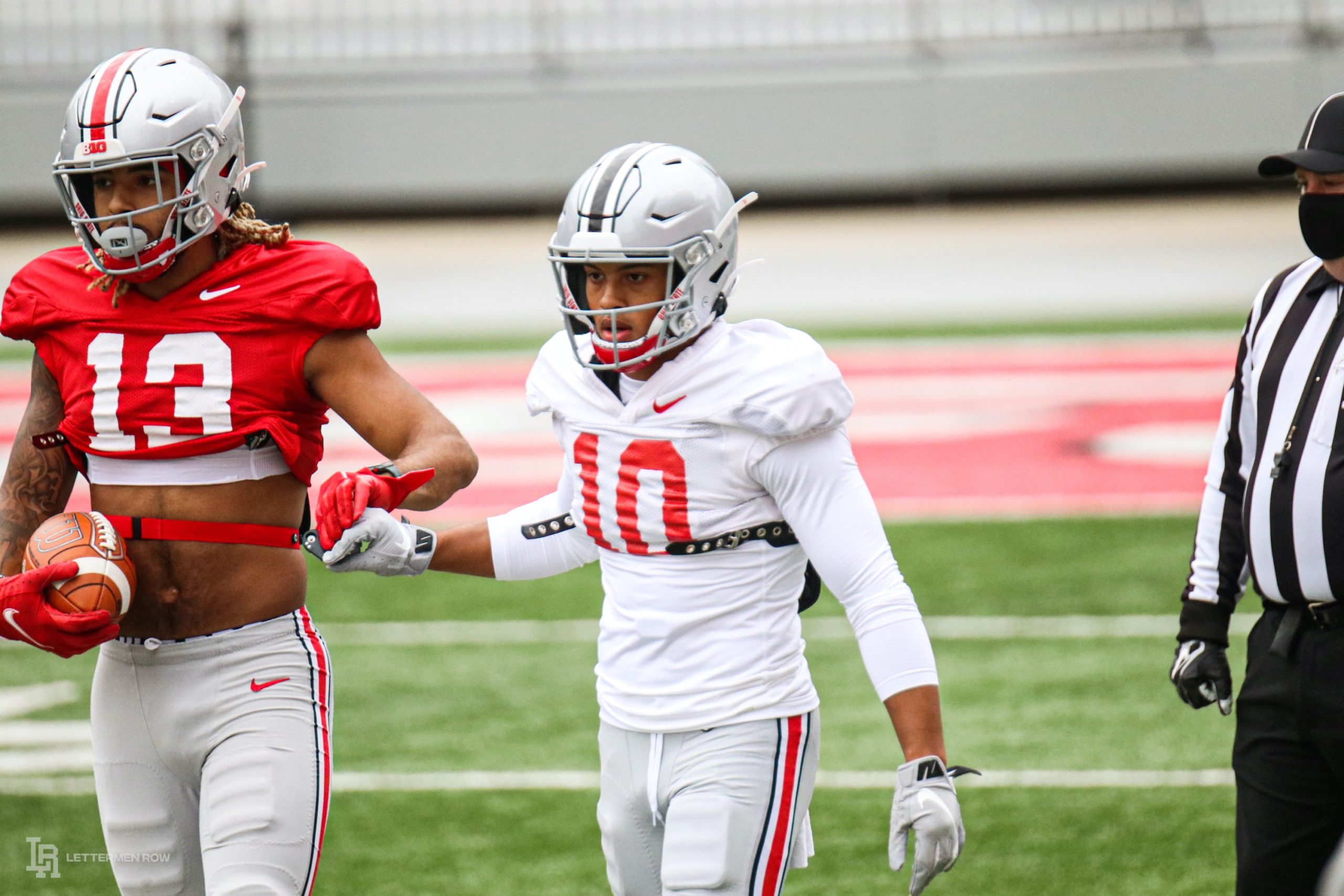 Cameron Martinez played quarterback in high school and has rarely ever lined up at cornerback in his football career.

That’s not stopping him from impressing the Ohio State coaching staff early in his career on defense. The freshman cornerback lost his black stripe Wednesday after practice, and he’s been taking reps at the slot cornerback position. After losing two first-round picks on the outside and sliding Shaun Wade out to replace them, Ohio State needs depth. And Martinez seems to be in position to provide that. Maybe Martinez can make a move toward playing time in Year One.

“I think we have a great group of freshmen,” Coombs said last week. “They’re talented. They don’t know what they don’t know yet, so we’re working on that. They’re learning about the toughness about Ohio State and the culture. I think those kids are going to contribute. This season more than any other, you’re going to have to depend on inexperienced players to step in and fill roles. So we’re working really hard on coaching our depth.”

With the black stripe off, the dynamic athlete Martinez is ready to push for playing time as he adjusts to playing in the Buckeyes secondary.

Ohio State is back at full speed on the practice report as other teams around the country complete a wild week of college football. And Lettermen Live is back at Roosters to break down every angle.

Lettermen Row senior writer Austin Ward is joined by an all-star panel of former Buckeyes, including Anthony Schlegel, Michael Bennett and first-time guest Joe Burger to talk about the depth Ohio State has at linebacker and other spots on defense, the upsets that happened in college football over the weekend and much more.

The guys talk about what is happening at Texas and Oklahoma as two blue-bloods in the Big 12 go down and why Ohio State avoids letdowns like that.

Are Buckeyes still in play for Tristan Leigh?

Ohio State has an incredible recruiting class in the 2021 cycle, but the Buckeyes could still use another offensive tackle prospect to complete the class and complement the offensive linemen who are already committed.

The Buckeyes have locked in on five-star tackle Tristan Leigh from Virginia. Where does his recruitment stand? Are the Buckeyes still in the mix? Lettermen Row recruiting expert Birm has the full analysis. Part of that is here:

As this wild summer unfolded, Leigh and his family started to look ahead to his recruitment’s culmination and were hoping to make official visits to the schools at the top of their lists, including Ohio State. With a recruiting dead period that refuses to jolt back to life, those official visits haven’t been able to happen. So Leigh and his family decided to get creative and made one visit to Oklahoma and two visit to LSU on their own dime. Now they’re hoping to make the same kind of visit to Ohio State on the weekend of Oct. 24.

The Buckeyes are definitely hoping that is the case, because there is absolutely no indication they’re giving up the chase for Leigh even with the recent addition of Zen Michalski. Michalski, Donovan Jackson and Ben Christman are all talented offensive linemen who can play tackle if required, but none of those three are the true tackle prospect that Tristan Leigh is.

For the full breakdown of Leigh’s recruitment and the Buckeyes involvement, click here.