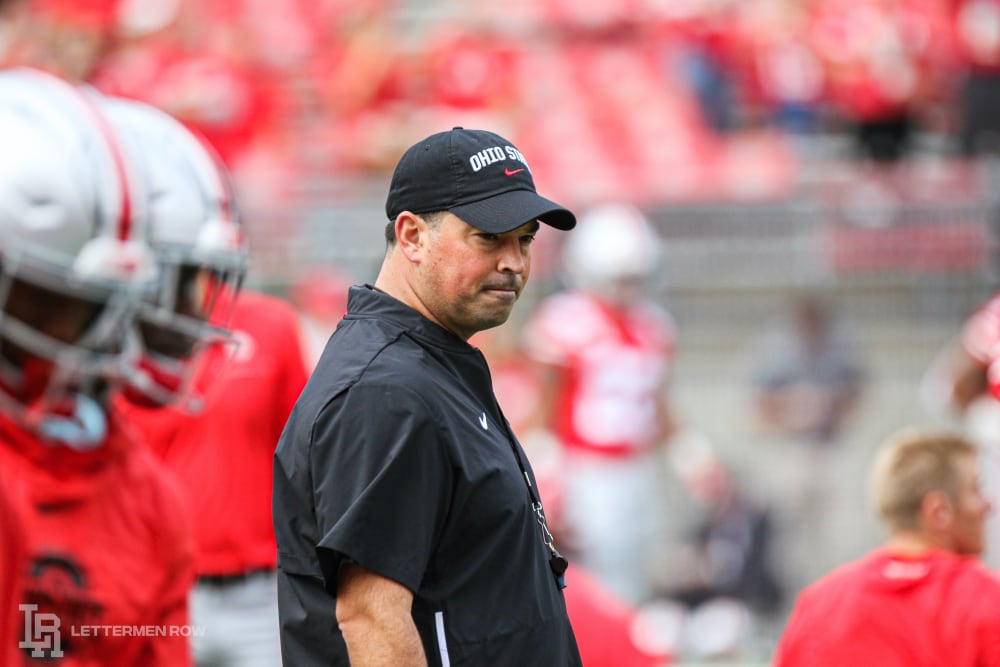 Ryan Day and the Buckeyes are over the scholarship limit. (Birm/Lettermen Row)

Buckeyes could be done on recruiting trail in class of 2020

With the current class in place and the returners coming back for the 2020 season, the Buckeyes sit at 89 scholarships, and they must get to the 85-player limit by August. So are the Buckeyes done in the recruiting class? Are they content with the 24 pledged to play for Ryan Day, or will they go for any other prospects?

Five-star running back Zachary Evans is available still. The Buckeyes have a need at running back. Will they target Evans? Lettermen Row recruiting expert Birm has the details:

Ohio State is hosting Dalton (Ga.) 4-star running back Jahmyr Gibbs this weekend for an official visit. Gibbs is the priority when it comes to a second running back in the Buckeyes 2020 class — not Evans. The relationship between Ohio State and the Georgia Tech commit far outweighs any relationship with Evans no matter how many Buckeyes coaches begin following him on Twitter.

However, there’s not much in the way of optimism when it comes to getting Gibbs to leave the south for college, and the belief among those at Ohio State right now is that he’s more likely to stay committed to Georgia Tech than he is to flip to the Buckeyes.

But he’s making an official visit to campus, and Ohio State obviously has a lot to offer a young running back in this recruiting cycle.

Landing Gibbs would remove any possibility of a renewed pursuit of Evans. And for that reason, I think it makes sense that the Buckeyes would wait until after the visit from Gibbs before settling down and really diving into whether or not to kick the proverbial tires on Evans.

Gibbs is unlikely to come to Ohio State. But so is Evans. For the full story, click here.

The No. 1 wide receiver in the class of 2020, and the No 2 overall player in the 247sports.com composite rankings, Fleming played in a run-heavy system in high school, and now, the fine-tuning of his routes and pass-catching will come from the explosive Ohio State offense.

Fleming has always been the most athletic player on the field, but that might change at Ohio State. Still, the need for a play-making wide receiver is evident. And the true freshman might be the perfect weapon for the Buckeyes to deploy early in his career.

Can Julian Fleming live up to the sky-high expectations with Ohio State? What will be the key in his transition and development with the Buckeyes? Where will position coach Brian Hartline focus with him first in spring camp? Former Ohio State captain Evan Spencer was back in the Lettermen Row film lab looking at the high-school highlights of Fleming to answer those questions in the latest episode of BuckIQ.

On this week’s edition of Lettermen Live hosted by Roosters, the crew takes a deep-dive into the recent assistant coaching moves, including the promotion of Corey Dennis. Is Ryan Day waiting on Kerry Coombs to finish his duties coaching the Tennessee Titans to fill the open defensive backs job? Find out what Mike Doss, Anthony Schlegel, Spencer Holbrook and Austin Ward think.

The guys also discuss the legacy of Joe Burrow.

Chris Holtmann and the Buckeyes are on an abysmal four-game losing skid. The offense has sputtered in the four games, averaging under 60 points per game.

Ohio State has a great chance to get back to winning Tuesday night when it hosts Nebraska. The Buckeyes will have an opportunity to re-establish themselves as a Big Ten contender and find some momentum before another road trip this weekend. As the standings currently sit, the Buckeyes are No. 13 in the Big Ten with a 1-4 record, but they didn’t fall out of the Top 25 that was released Monday; they checked in at No. 21. To start climbing back up the rankings, the Buckeyes need a win over Nebraska. Tipoff is scheduled for 6:30 p.m. and can be found on FS1.