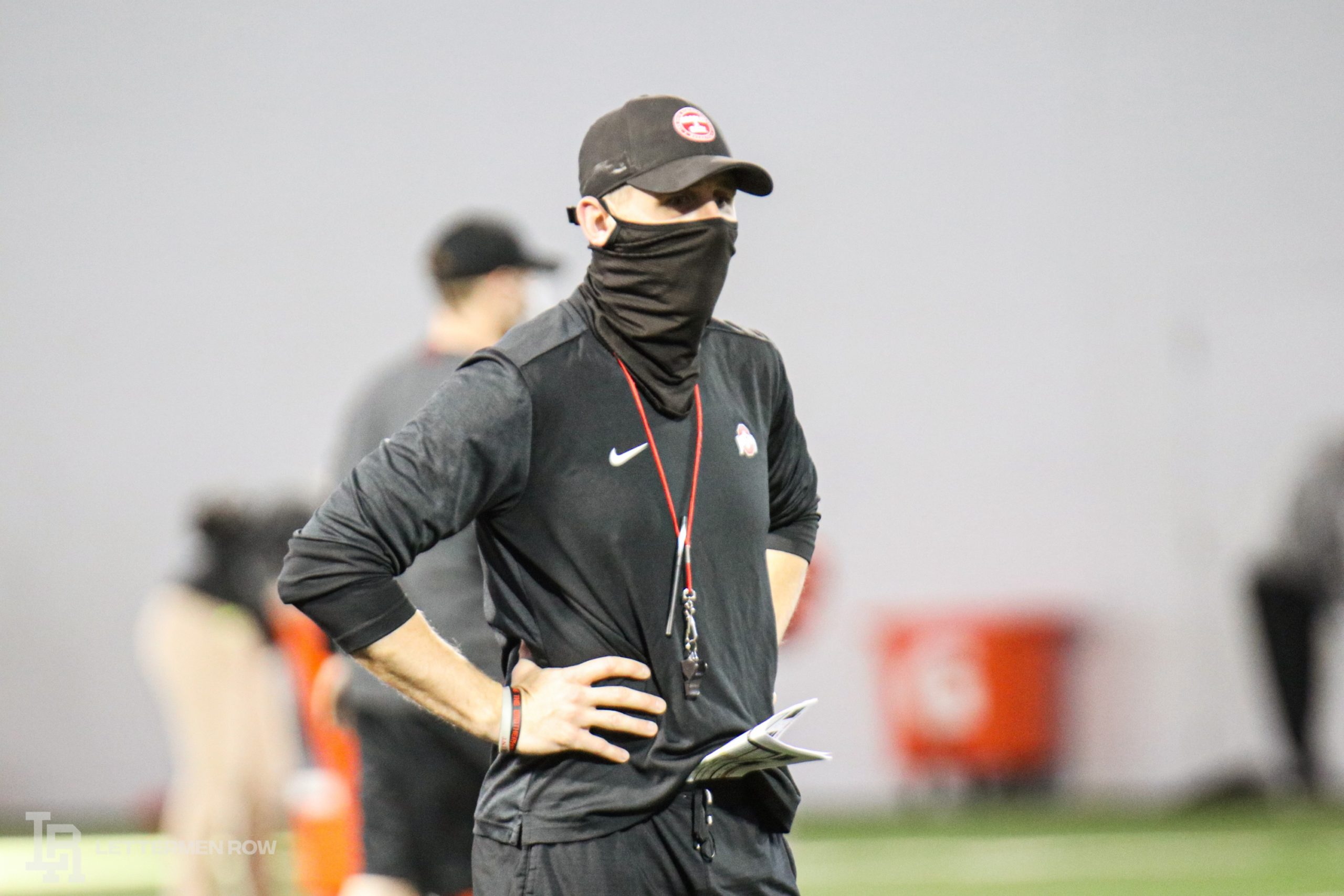 Brian Hartline and the Buckeyes have started a coaching initiative. (Birm/Lettermen Row)

Ohio State has some of the best football coaches in the country. So the Buckeyes coaching staff, and the football program as a whole, started a coaching initiative ‘Play a Great Game’ to help coaches and players at all levels learn how to play the game well — and play it the right way.

That initiative seems to be taking off, and the latest installment of it featured former Ohio State and NFL receiver and current Buckeyes wide receivers coach Brian Hartline in a series of videos on Twitter.

In a series of seven videos posted to social media Wednesday evening, Hartline worked with three kids and walked them through proper wide receiver stance, firing off the ball, breaking down in their routes and more.

It’s all part of the Buckeyes effort to help coaches and players stay active in the game of football year-round. And with the restrictions still in place, coaching clinics may not happen this summer. So the video should provide insight to coaches and players who want to be better.

Hartline is one of the best in college football at teaching wide receivers. With the Buckeyes new initiative, he’s trying to help more coaches and players learn those skills, too.

Are Buckeyes running out of time with top 2023 quarterback?

Ohio State currently has a loaded quarterback room. And the Buckeyes are hoping the future of that room features quarterbacks with the same level of talent.

That will involve landing a blue-chip quarterback in the class of 2023. But the Buckeyes could be running out of time in their pursuit of five-star quarterback Malachi Nelson. He’s scheduling visits for this summer, and Lettermen Row recruiting expert Jeremy Birmingham broke down what Nelson’s potential commitment timeline looks like:

The Los Alamitos (Calif.) High School quarterback will make a trio of pivotal visits this summer to Clemson, Oklahoma and USC. Those visits may end up telling the tale of his recruitment. When asked by Lettermen Row if he felt a decision would likely come soon after those trips, his response was telling.

“That sounds right to me,” Nelson told Lettermen Row. “I can try and get all the wide receivers in my class to come with me.”

Ohio State hasn’t hosted Nelson previously and will have to push pretty hard to make one happen. The 6-foot-3, 180-pound sophomore still has a good relationship with the Buckeyes, though.

For more on the recruiting trail and the latest between the Buckeyes and Nelson, click here.

The NFL draft is just a week away, and plenty of Ohio State stars will be taken. The Tim May Podcast is back with a special episode to break down every Buckeyes angle of the draft.

Lettermen Row’s Tim May welcomes Ohio State graduate and current Sports Illustrated columnist Albert Breer to discuss the latest happenings as the Buckeyes gear up to be selected in the NFL draft. They made sure to break down Justin Fields draft stock with a week remaining until the draft, other potential landing spots for Buckeyes and, of course, Albert’s Ohio State fandom.

Don’t miss the special NFL draft edition of the Tim May Podcast.