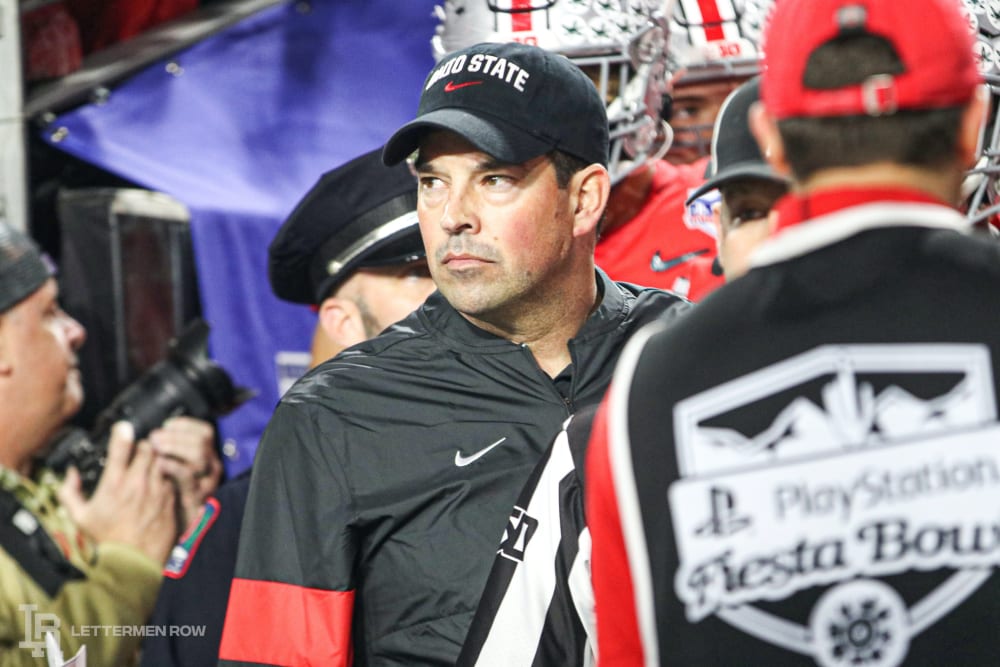 Ohio State coach Ryan Day and the Buckeyes have things to learn after the loss in the Fiesta Bowl. (Birm/Lettermen Row)

First-year Ohio State coach Ryan Day speaks like a veteran head coach, even though the loss in the Fiesta Bowl to Clemson was the first of his career.

Day was upset, angry and emotional after the Buckeyes loss in the College Football Playoff, understandable for how close they were to beating the defending national champs and advancing to the title game. Day found the right words to say after the loss, choosing to learn from the film rather than throw it away and not watch it.

“I think when we look back on it, it is going to be overwhelming,” Day said. “Those game-altering plays that happen in a game, you need those things to go beat a team like Clemson where you’re playing in a Semifinal game. You need those one or two plays. Then to miss a couple of them, that hurts you. Again, a range of emotions. We’ll rest on it. Watch the film, and kind of go from there.”

Where the Buckeyes go from there will be the offseason, where they have plenty of starting spots to fill and improvements to make. But it’ll all start with evaluating what happened in the Fiesta Bowl loss. If they can make the right adjustments, they’ll be a scary team in 2020.

The second underclassmen from Ohio State has made a decision: Jeff Okudah has his name in the 2020 NFL Draft.

Okudah announced his decision Wednesday, joining J.K. Dobbins as members of the loaded 2017 recruiting class to leave Ohio State early and enter the draft. They won’t be alone, as Chase Young will likely also enter his name in the draft as one of the best overall players that can be selected.

Okudah penned a letter to his mother as he made the announcement on The Players’ Tribune.

Need analysis on what the loss of Okudah means for the Buckeyes? Who can replace him? Will the Buckeyes go to the transfer portal for help in the secondary that is now looking for three new starters and could need a fourth, too? Our Austin Ward breaks it down.

The goals at Ohio State are obvious. The Buckeyes want to win the Big Ten and compete for national titles every year, and the expectations never change.

But in the spirit of the new year, the Buckeyes have a few resolutions. What can the Buckeyes do for their New Year’s Resolutions? How can Ohio State improve? What needs to be done in the Woody Hayes Athletic Center in 2020? Austin Ward has the details.

Whether it’s fair or not, conferences are judged based on their bowl performances. The Big Ten is likely to get mixed reviews after bowl season is complete.

With just one game to play — Indiana’s matchup on Thursday against Tennessee — the Big Ten is 4-4 in bowl games. On New Year’s Day, Wisconsin lost a classic Rose Bowl to Oregon and Michigan lost the Citrus Bowl to Alabama, while Minnesota downed Auburn in the Outback Bowl.

If Indiana can find a way to beat Tennessee, the Big Ten will have a winning record in bowls this season.