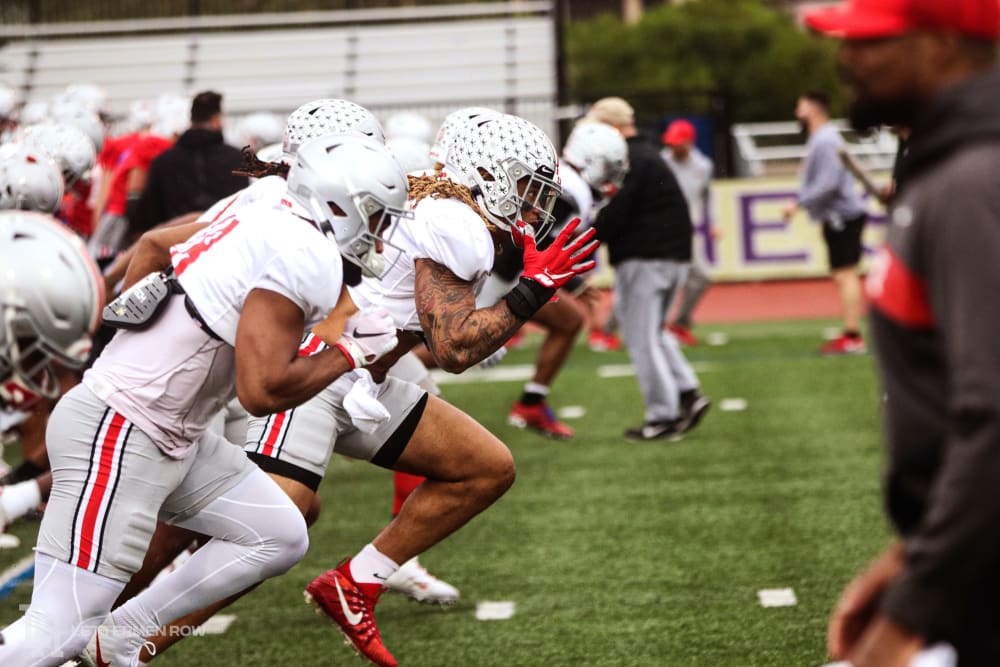 The Buckeyes were back on the practice field in the desert, but it felt like they were back home in Columbus.

Tuesday’s practice at Notre Dame Prep High School was cold, wet and windy, but the Buckeyes didn’t delay practice to find time in an indoor facility. They seem perfectly fine preparing for Clemson in the Fiesta Bowl while battling the elements. Much attention was paid to Justin Fields and the status of his left knee, which has been banged up since mid-November.

After practice, Lettermen Row had the wall-to-wall coverage of the open practice session and media availability with the Playoff Drive presented by Byers Auto. Check out our daily videos leading up to the Fiesta Bowl on Saturday.

As the preparation for the Fiesta Bowl ramps up and Ohio State continues to game plan for Clemson, select Buckeyes players and coordinators met with the media. Ohio State co-defensive coordinator Greg Mattison talked about the defense and how it has developed throughout the season into the Fiesta Bowl prep. Kevin Wilson broke down the matchups to watch between the Ohio State offense and the Clemson defense.

Full interviews can be found below:

Lathan Ransom sits down with Birm

Last week, Lathan Ransom signed his letter of intent with Ohio State and officially became a part of the program.

On Monday, his future teammates with the Buckeyes came to see him in Arizona. Ransom made the trip from Tucson to Scottsdale to watch Ohio State practice Monday afternoon. The time watching practice allowed him to get a feel for what he’ll be participating in during the next four years.

While Lettermen Row is out in the desert covering the Buckeyes, recruiting guru Birm caught up with Ransom in Scottsdale to break down his decision to stay with the Buckeyes despite the departure of Jeff Hafley, his plans for the next few years and other topics about Ransom and being a Buckeye.

Make sure to check out Birm and Lathan’s chat.

If anyone needed proof of how important Shaun Wade is to the Ohio State defense, look no further than the game against Michigan.

Wade’s absence was clear, and the Buckeyes gained quite a bit when Wade came back for the Big Ten title game. Now, he’ll be in the spotlight when the Buckeyes face Clemson in the Fiesta Bowl for the College Football Playoff semifinal.

What makes Shaun Wade so critical to the Ohio State defense? How close is the redshirt sophomore to full strength heading into the Fiesta Bowl? Where can the Buckeyes use him the best to create winning matchups against Clemson? Former Ohio State safety Mike Doss was back in the Lettermen Row film lab with Austin Ward to look at how Wade has been used and try to answer those questions in the latest episode of BuckIQ.