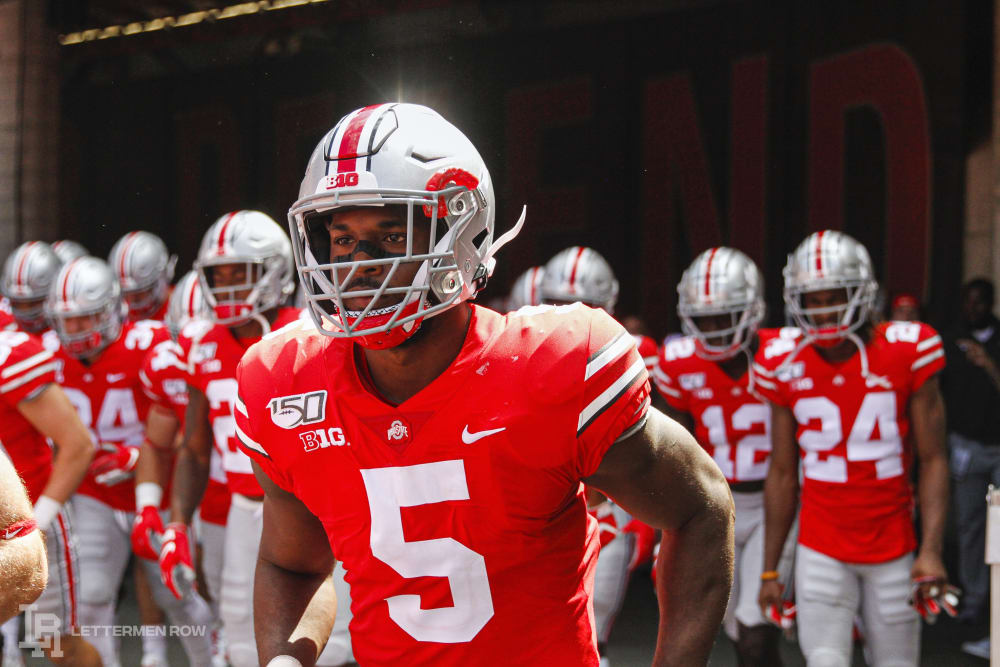 Ohio State linebacker Baron Browning is expected to be back for the game against Wisconsin. (Birm/Lettermen Row)

Maybe Ohio State’s matchup with Wisconsin lost a little of its luster when the Badgers were upset by unranked and struggling Illinois on Saturday. But the test Wisconsin poses for the Buckeyes still remains.

Despite not playing in the 52-3 blowout win at Northwestern on Friday night, Ohio State linebacker Baron Browning is expected to be back and available next week when the Buckeyes take on their second ranked opponent of the season.

“We’ll see when we get home, but we do expect him to be ready next week,” Day said.

The Buckeyes seemed to be missing Browning in the first quarter against Northwestern; they gave up chunk plays and the only points surrendered in the game. Ohio State made adjustments and shut Northwestern down, but Browning could have helped the Buckeyes early. He should be rested and ready to face the tough test against the Badgers.

When the availability report came out Thursday, starting left tackle Thayer Munford was a game-time decision against Northwestern. Josh Alabi was listed as out. That put the Buckeyes in a bind with the two left tackles potentially sidelined.

Enter Nicholas Petit-Frere, a second-year tackle who struggled early but rebounded for a solid performance against a good Northwestern front. Petit-Frere showed flashes of his ability to be a decent backup option at left tackle for the Buckeyes, especially considering he practiced all preseason at right tackle.

For more on Petit-Frere’s performance, check out the latest from Lettermen Row’s Tim May on how Petit-Frere helps a depth crisis at Ohio State.

Defensive backups answer when called upon

Ohio State hasn’t had a close game in the fourth quarter this season. Sure, the Michigan State game wasn’t entirely a blowout, but the result of the game was never in question, and it hasn’t been in any game this season.

So, the Buckeyes are able to sub their backups in relatively early in the second half. And when those backups answer, it impressed the coaching staff, especially when the younger guys are forcing turnovers.

“Maybe one of the most impressive things was to see the younger guys and some of the backups get in and continue to play well,” co-defensive coordinator Jeff Hafley said. “With the two picks, with Sevyn [Banks] and Amir [Riep], I’m really proud of the way all those guys finished the game.

“We always have a goal to have a fourth-quarter shutout. That’s really important to us and to the team, so you can see the older guys were excited, and the young guys went in and did that.”

As the Buckeyes face a tough test against Wisconsin, they should get some younger guys playing time in early November against Maryland and Rutgers. The fourth-quarter shutout might be in the hands of the backups again soon. But it seems that it won’t be a problem for these Buckeyes.

Miss any of the game-day coverage from Lettermen Row?