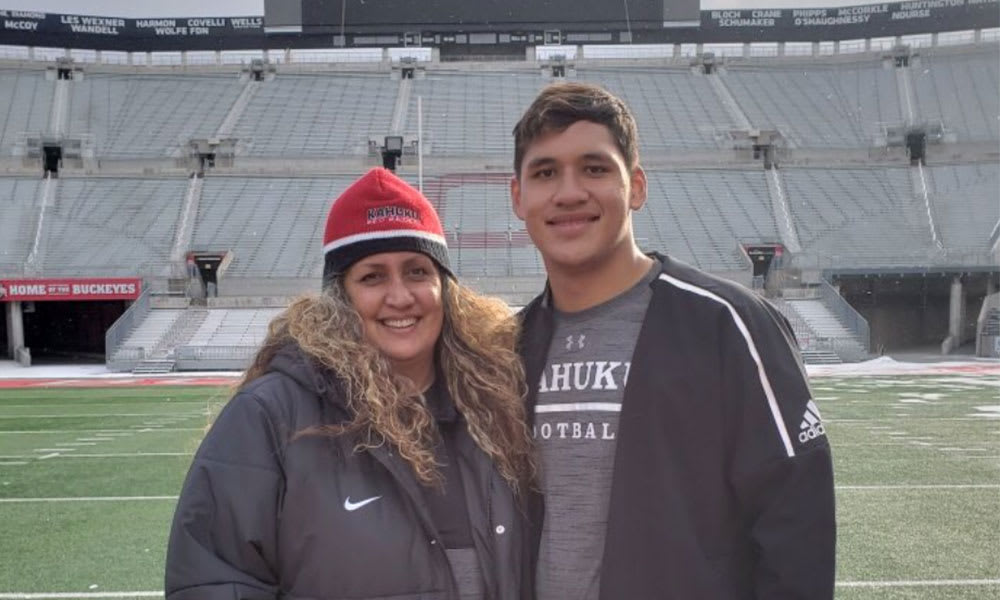 The Buckeyes had one official visitor to Ohio State’s campus today over the weekend and it was the country’s seventh-ranked guard, Enokk Vimahi. The Hawaiian lineman arrived in Columbus on Friday afternoon and was still in town Sunday morning.

Vimahi’s 247Sports.com crystal ball is heavily slanted toward the USC Trojans and though there’s no doubt the Trojans have been the team to beat, people who spent the weekend around the 6-foot-4, 270-pound Vimahi believe Ohio State might’ve done enough to change the direction in his recruitment.

For more on Vimahi’s visit and more recruiting updates from the weekend, check out Sunday’s Dotting the ‘Eyes.

Ryan Day success of the recruiting front, despite wait for Doug Nester’s decision

Ohio State is currently in the unenviable position of waiting out Doug Nester’s official visit to Penn State to find out if Nester, the first player in OSU’s Class of 2019 to commit, will in fact end up signing with the program.

And while that’s a frustrating thing to endure, here’s something to consider: The fact that there’s only one such situation is a borderline miracle and should be an extremely reassuring sign for the Ryan Day era.

When Urban Meyer announced his retirement Dec. 4, he said he did so then with recruiting in mind. The early signing period was just a couple weeks away, and this offered a way to be transparent with recruits while also giving Day a chance to save the class.

“If you sign a scholarship and the coach decides to leave after that, they’re free to go,” Meyer said. “People will say, why would you let recruiting get in the way? That’s a silly question … if you want to have a good team, you recruit. And you recruit very hard.

“So that put a little push on it. And to be honest, I didn’t want to mislead recruits. Gene [Smith] and I both felt — not felt, we knew — and that’s what made the decision now.”

Well, it seems as though Ohio State football’s best-kept secret gained some traction ahead of Terry Mclaurin’s appearance in the Reese’s Senior Bowl Saturday.

NFL scouts and draft analysts across the country began to truly take notice of the former Buckeyes wide receiver this past week during the bowl’s practice, where McLaurin put on a well-rounded show for those watching. Many were enamored by his speed, athleticism, route-running ability as well as his overall ability to be coached and desire to simply be on the field at all times.

Then, on Saturday during his final collegiate game, McLaurin proved just how versatile and dangerous he can be on the field.

The next step for the former Zone 6 member will be the NFL, and he has already turned some heads to likely move up the draft board. Why? Lettermen Row is taking a look at a few reasons teams are starting to learn the name Terry McLaurin.

Does the transfer portal hold any fits for the Buckeyes?

Since the NCAA adopted measures to grant more power to student-athletes in control of their playing careers, and since specifically college football is seeing more and more players gain immediate eligibility with a new school rather than sitting out the oft-mandated one-year term, the transfer portal has become ubiquitous in discussing college football.

Ohio State’s portal entrants are known and don’t project any great losses for the Buckeyes, as they transition from Urban Meyer into the Ryan Day Era.

Still, the Buckeyes — who return loads of talent in several key positions, plus are anxiously awaiting a ruling that could allow former five-star quarterback and Georgia transfer Justin Fields to gain immediate eligibility in Columbus — potentially can bolster their roster with the steady stream of players entering the portal, either as transfers seeking a new home or graduates looking to cap their collegiate careers in a new setting.

Citing sources with direct access to the database, Lettermen Row is diving into the portal to look at a few possibilities for Ohio State.

The losing skid is over, and Ohio State isn’t dead yet.

Winless in the New Year and falling into dangerous bubble territory as they hit the road on Saturday, Chris Holtmann and the Buckeyes unleashed a month’s worth of frustration with the kind of effort that was a hallmark of their early-season success.

Critical 3-pointers were knocked down. The rebounding edge belonged to Ohio State. The second-chance plays went the way of the Buckeyes. And a stingy defense set the tone as a five-game losing streak came to an end on Saturday afternoon with a 70-60 win over Nebraska.

For a full recap of the win, check out Lettermen Row’s Three Points.