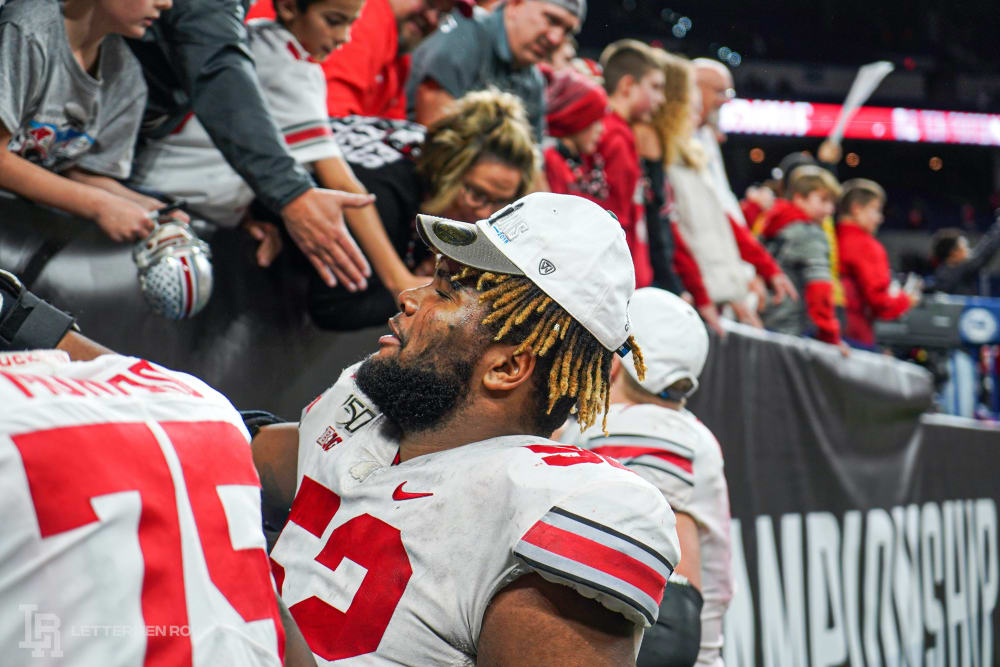 Ohio State is beginning to prepare for the College Football Playoff. (Birm/Lettermen Row)

Ohio State and Clemson know what it’s like to play in big games. The Buckeyes have played three straight ranked opponents and found themselves in last season’s Rose Bowl. Those are huge games. Clemson won a national title last year and has won 28 straight games overall.

Those accomplishments are earned by playing in big games. So, the stage won’t be too big when the Buckeyes and Tigers meet in a couple weeks in the desert.

“Well, I think both teams played in big games,” Ohio State coach Ryan Day said on the Fiesta Bowl teleconference. “You don’t go to Ohio State or Clemson without playing in big games. That’s just kind of how it goes. So I don’t think the stage will be too big for either side. And our guys and certainly Clemson’s guys have played in this arena before. So I don’t think that will factor in.”

The game won’t be too big for either team or either coach. Big games just come with the territory. Another one will happen on Dec. 28 in Arizona.

Early Signing Day is just a little over a week away, and the Buckeyes are likely to be busy in the days leading up to the primary signing day in the 2020 recruiting cycle.

Ohio State coaches hit the road almost immediately after the win over Wisconsin in the Big Ten title game. While other schools who didn’t make conference championship games were able to recruit last week, the Buckeyes were busy preparing for Wisconsin. Now as they begin the preparation for Clemson, they have one week to check in with 2020 and 2021 recruits before getting back to Columbus for a deep dive into the Fiesta Bowl matchup.

Who is enrolling early for the Buckeyes? Who will wait until this summer to join the team? Is there a wild card who is still uncommitted? Check out Dotting The ‘Eyes with Birm for all those details and more.

What does Ohio State need to fix after a shaky first half against Wisconsin? How do the Buckeyes match up with Clemson in the Fiesta Bowl? Did the College Football Playoff committee get everything correct? Find out out in the latest installment of Lettermen Live hosted by Roosters with Lettermen Row’s Austin Ward and Spencer Holbrook, as well as former Buckeyes greats Jake Stoneburner and Michael Doss.

Ohio State basketball moves up to No. 3

Chris Holtmann and the Buckeyes had an incredible first month of the season.

Now, they’re no longer the hunter, but rather the hunted. Ohio State went on the road last week and buried another top-10 opponent, this time North Carolina. With that huge win, the Buckeyes moved up to No. 3 in the latest AP Poll released Monday.

Louisville retained the top spot. Kansas, Ohio State, Maryland and Michigan rounded out the top five. The Buckeyes have wins over No. 18 North Carolina and No. 20 Villanova. Moving forward, they’ll battle to stay in the top five.