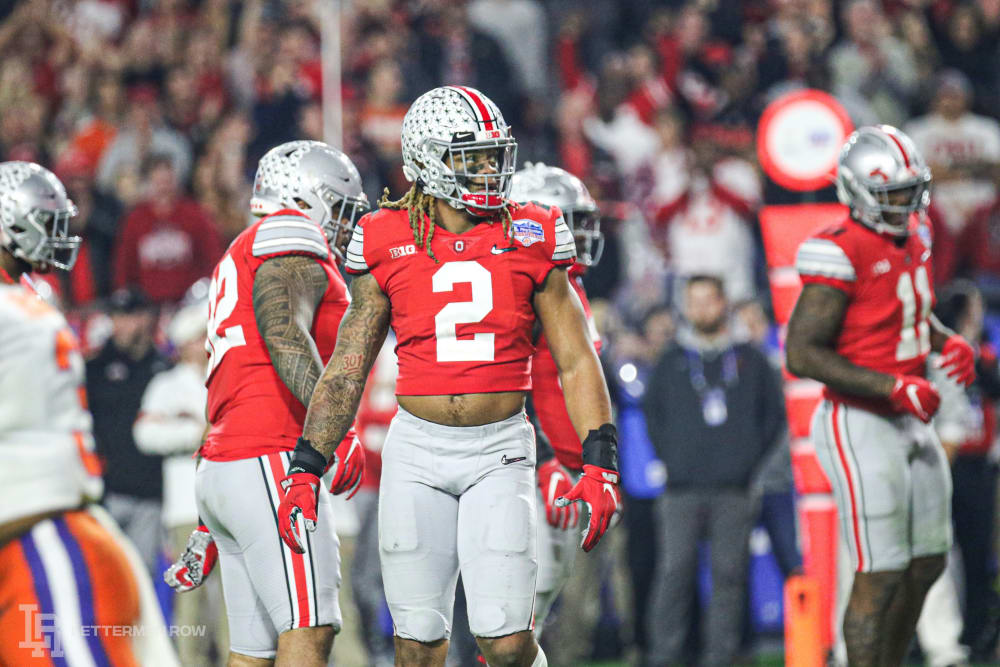 Former Ohio State defensive end Chase Young is projected to be the No. 2 overall pick in the NFL Draft. (Birm/Lettermen Row)

Although the entire sports world has been put on hiatus as a global pandemic continues to halt every-day life, the NFL Draft is still expected to happen, meaning plenty of Buckeyes will hear their names called early in the weekend.

It’s also the time of year for mock drafts, when experts with inside information share who they think will be selected at each spot by each team in the draft. ESPN’s Mel Kiper Jr., one of the most recognizable names in the draft analysis business, has released his third 2020 NFL mock draft to ESPN+. Two Buckeyes show up early in the first round.

Kiper has Chase Young being selected No. 2 overall to the Washington Redskins, who drafted former Buckeyes Dwayne Haskins and Terry McLaurin last season. Kiper also has former Ohio State cornerback Jeff Okudah at No. 3 overall to the Detroit Lions, who desperately need help in the secondary. Okudah could become a key piece for that defense. Of course, Kiper also has former Ohio State quarterback Joe Burrow, who finished his career at LSU, as the No. 1 pick to the Cincinnati Bengals.

Simply put, if Kiper’s mock draft comes true, the Buckeyes will be well-represented in the first round of the NFL Draft next month.

Ohio State has already landed a commitment from a big-time tight end, when Sam Hart announced his commitment to the Buckeyes. The 6-foot-5 tight end from Colorado may have another tight end in the class with him, as the Buckeyes will look to bolster that room after this season and potential departures from the program.

One of those options to help solidify the future of the tight ends at Ohio State is four-star tight end Hudson Wolfe. The 6-foot-6 tight end from Savannah, Tennessee, is the country’s No. 9 player at his position. Could he be next to join Hart and the Buckeyes? Lettermen Row recruiting savant Birm has the story:

Savannah (Tenn.) 4-star Hudson Wolfe has been up near the top of the list for Ohio State for more than six months and the 6-foot-6, 245-pound prospect has been staying involved with the Buckeyes during this NCAA-imposed dead period.

“I’m disappointed I can’t get to campus anytime soon,” Wolfe, who was scheduled to visit Ohio State on March 25, told Lettermen Row. “But we continue to have great conversation on the phone. I was on FaceTime with [Buckeyes tight ends] Coach [Kevin] Wilson today.”

The country’s No. 9-ranked tight end, Wolfe says the current recruiting situation has forced him to consider narrowing down his list of schools because the uncertainty around visits means previous trips need to be weighed again.

Need more insight from the recruiting trail? Birm has you covered. Click here for the latest Dotting The ‘Eyes.

Tim May welcomed Oklahoma beat writer Ryan Aber onto the latest episode of his podcast this week to break down what graduate transfer running back Trey Sermon will bring to the Ohio State backfield and what the future of the sport looks like in the world of the transfer portal, not just for the Buckeyes.

Then, Tim had Lettermen Row senior writer Austin Ward on the show for a deep dive on what Sermon means for Ohio State moving forward and how the depth chart in the running back room changes with Sermon’s addition. The pair talks about how quarantine is going, as well.

All Lettermen Row podcasts are available on iTunes, Google Play, Spotify and Stitcher.