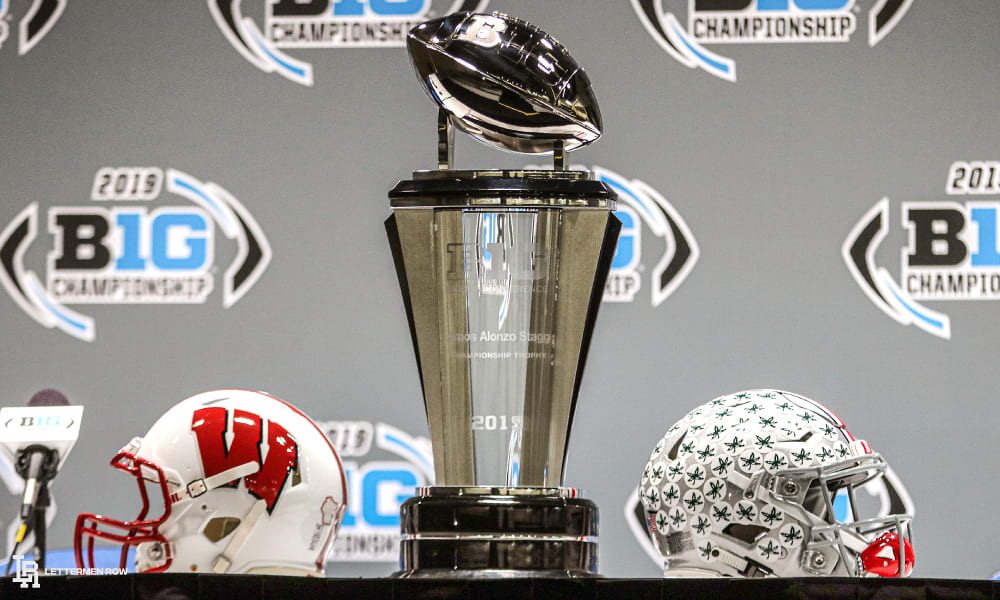 The Buckeyes and Badgers arrived in Indianapolis on Friday for a primetime Big Ten rematch. (Birm/Lettermen Row)

Ohio State will battle Wisconsin in the Big Ten title game for the third time since 2014. Ohio State is 2-0 against the Badgers in Indianapolis. The Buckeyes will play their first same-season rematch since 1975, when they split two games with UCLA in the regular season and Rose Bowl. Ohio State is 60-18-5 all time against the Badgers. The Buckeyes are playing for their 38th Big Ten title.

The line: The Buckeyes are a 16.5-point favorite, per VegasInsider.com

There will be no doubt before kickoff this week: Ohio State is going to have the entire starting lineup available with a championship on the line.

That doesn’t necessarily mean the Buckeyes are all at full speed, especially with Justin Fields still feeling pain due to an MCL sprain. But the Buckeyes will regain one of their top defenders when Shaun Wade suits up for them against Wisconsin with the Big Ten title on the line.

Wade was absent from the availability report, which was released by the program Friday. All hands are on deck for the Buckeyes as they battle Wisconsin for the second time this season. If Ohio State can win, it’ll likely lock up the top seed in the College Football Playoff. The Buckeyes will do so with their full starting lineup.

What can be expected of No. 1 Ohio State as it heads to Indianapolis to defend its Big Ten crown? Which superstars will make the biggest difference for Ohio State? Can the Buckeyes stop Jonathan Taylor for a second time this season? Will Justin Fields create a Heisman moment similar to last week? The Lettermen Row staff passed out five bold predictions ahead of the Big Ten championship game. Here’s what our staff predicted to see.

Lettermen Row will be inside Lucas Oil Stadium for the Buckeyes and Badgers, as Ohio State looks to head to the College Football Playoff with an undefeated record and a Big Ten title under its belt. Follow along on Twitter, Instagram and YouTube for experienced Ohio State coverage.