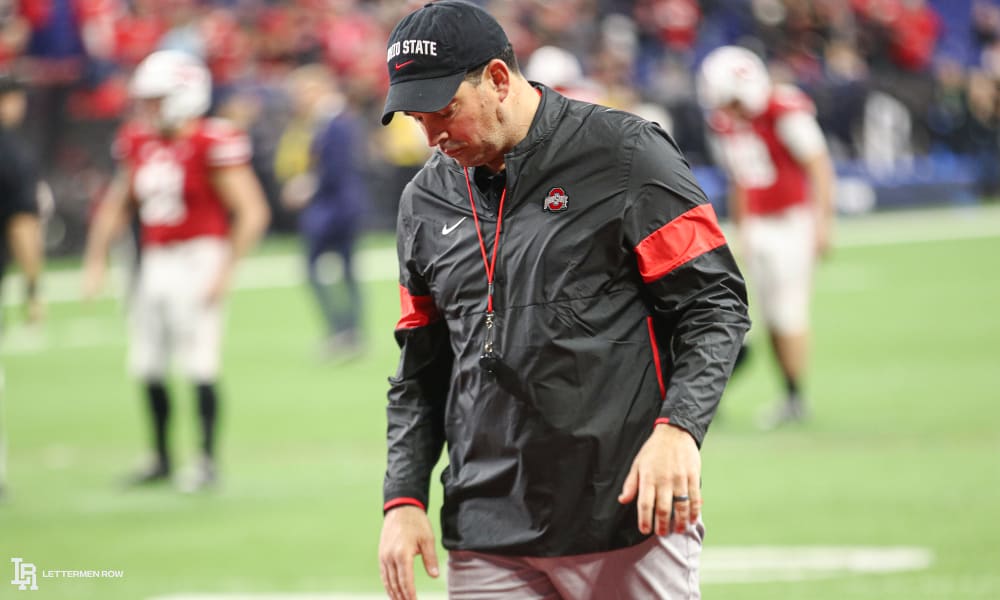 Ohio State head coach Ryan Day and the Buckeyes are making a push in the class of 2021. (Birm/Lettermen Row)

Ohio State is nearly finished with its 2020 recruiting class. The only piece left there is Cameron Martinez, the four-star athlete who is expected to sign with the Buckeyes in a couple weeks.

So now, the attention shifts to the 2021 recruiting class, where the Buckeyes have had a great early start to their group. Lettermen Row recruiting expert Birm is on top of every angle regarding the 2021 class and who could be a big priority target for Ryan Day and the Buckeyes, who are making their way around the country in the last few days to visit with who they believe are the best players in the country.

The Buckeyes are zoning in on St. Louis four-star cornerback Jakailin Johnson. Assistants Brian Hartline and Matt Barnes were in Missouri to see Johnson over the weekend, and Kerry Coombs was there Monday night. From Birm:

That meeting with Coombs is happening on Monday night. The Buckeyes are not being shy in their deployment of the new Ohio State defensive coordinator, choosing to send Ryan Day’s most recent coaching hire on the road primarily by himself as he visits top targets around the country — and Jakailin Johnson is most certainly that.

Last week, [Johnson’s high school coach] told Lettermen Row that he did not believe any imminent decision was coming from the 6-foot, 170-pound Johnson. But the decision to send Coombs back to St. Louis just one business day after Hartline and Barnes visited suggests that Ohio State believes there’s a good opportunity to sway the country’s No. 5-ranked cornerback in its direction for good.

Ohio State has a chance to have a special recruiting class in the 2021 cycle. Jakailin Johnson could be another one of the major pieces that can help the Buckeyes finish next year with a top class.

For the full Dotting The ‘Eyes from Monday, click here.

Damon Arnette breaks down his play on BuckIQ

Damon Arnette wasn’t at 100 percent at any point last season.

In his final act as an Ohio State cornerback, Arnette was forced to wear a cast for a wrist injury the entire season, limiting what he could do. Except it barely limited what he could do on the field, and he still had an incredible season for the Silver Bullets.

Arnette wasn’t going to miss time. He just had to wear that cast that he didn’t like, but that’s what it took to play out his final season with his teammates, so he did it. And he did it well. His interception return for a touchdown against Indiana was the highlight, but he had many memorable moments on his way to a College Football Playoff appearance with the Buckeyes.

What made the final season with the Buckeyes such a success for Arnette? How will the cornerback remember his career with Ohio State as he moves on to the NFL? What does he expect as he prepares for the draft? With his career at Ohio State now complete, Arnette joined Lettermen Row senior writer Austin Ward in the film lab to break down a few highlights and reflect on his accomplishments with the program in the latest episode of BuckIQ.

On the latest Lettermen Live at Roosters, senior writer Austin Ward was joined by Justin Zwick, Mike Doss and Anthony Schlegel. The group provided deep insight into Ohio State football offseason strength program and how it is run under Mickey Marotti. They also discuss the far reaching influence of Kobe Bryant, who was killed in a helicopter crash.