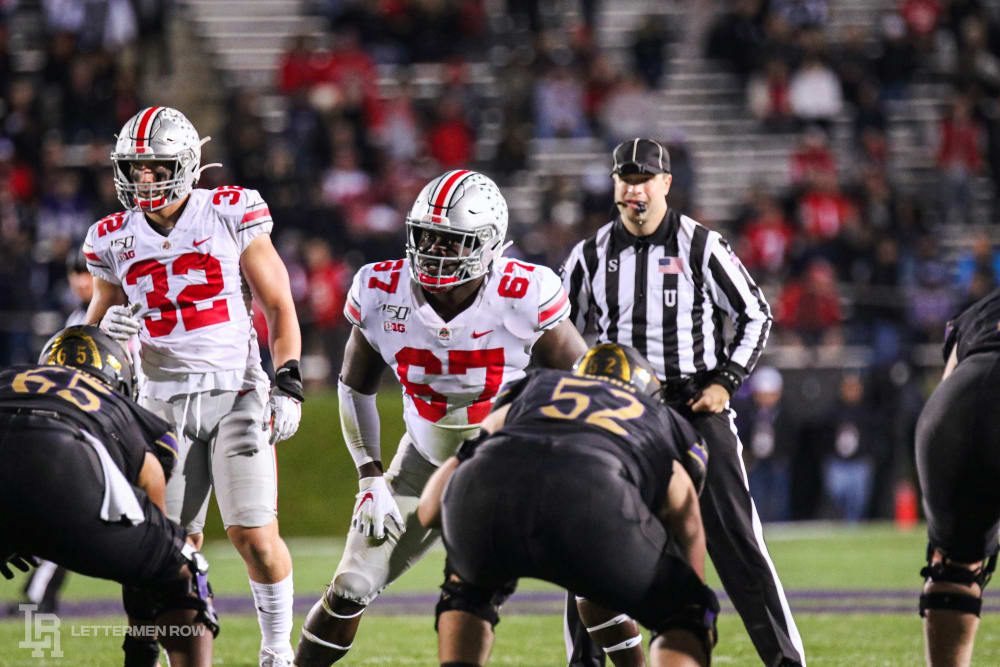 Ohio State will have to be sound along the defensive line against Wisconsin's offense. (Birm/Lettermen Row)

Ohio State has been steamrolling offensive game plans and opposing running backs this season. But Wisconsin’s Jonathan Taylor poses the biggest challenge for the Buckeyes stout defense. He is only a junior, and he already has more than 5,000 career rushing yards.

The stats say Taylor has been the best running back in the country for the last three seasons, and Ohio State knows it has its hands full with trying to stop him.

“He’s strong, fast, can change direction, powerful, guys bounce off of him, runs with an attitude,” Ohio State coach Ryan Day said. “A lot of guys that big don’t have the agility he has. He has good agility. He can run away. He’s good out of the backfield. He’s caught the ball. He’s kind of an all-purpose back.”

If the Buckeyes are going to get another win over a ranked opponent, the first step will be to stop Taylor and make Badgers quarterback Jack Coan beat them with his arm.

To find out What We Learned about the Buckeyes ahead of the matchup against Wisconsin, click here.

Select Ohio State coaches and players met with the media inside the Woody Hayes Athletic Center on Tuesday to preview the upcoming showdown between the Buckeyes and Badgers. Lettermen Row has all the angles covered from the press conference session, including videos of each player breaking down the Badgers and answering questions about the win over Northwestern last week.

The player and coach interviews can be watched here:

J.K. Dobbins is making his self-proclaimed “failure” from last year an afterthought.

The junior tailback has nearly 1,000 yards on the season. And he’s only played seven games this season, most of them blowouts without need for Dobbins late in games. But Dobbins doesn’t lead the country in rushing yards, and to him, that’s a problem. He still thinks there is plenty of room for improvement.

What has allowed Dobbins to take the next step for Ohio State this season? Can he possibly give the Buckeyes more down the stretch? Is he the best running back in the country? Former Ohio State and NFL tailback Beanie Wells and Lettermen Row senior writer Austin Ward break it all down in the film lab.

The latest BuckIQ about J.K. Dobbins can be found here.

On the latest Tim May Podcast, CBS Sports national college football writer Dennis Dodd joined the show to break down the Buckeyes from a national perspective and how Ohio State stacks up against the other top teams in the country. Lettermen Row senior writer Austin Ward also joined to talk about Ohio State’s upcoming matchup against Wisconsin and all the angles surrounding this weekend. Tim broke down a couple plays from the Buckeyes big win over Northwestern.

The latest episode of the Tim May Podcast can be found here.