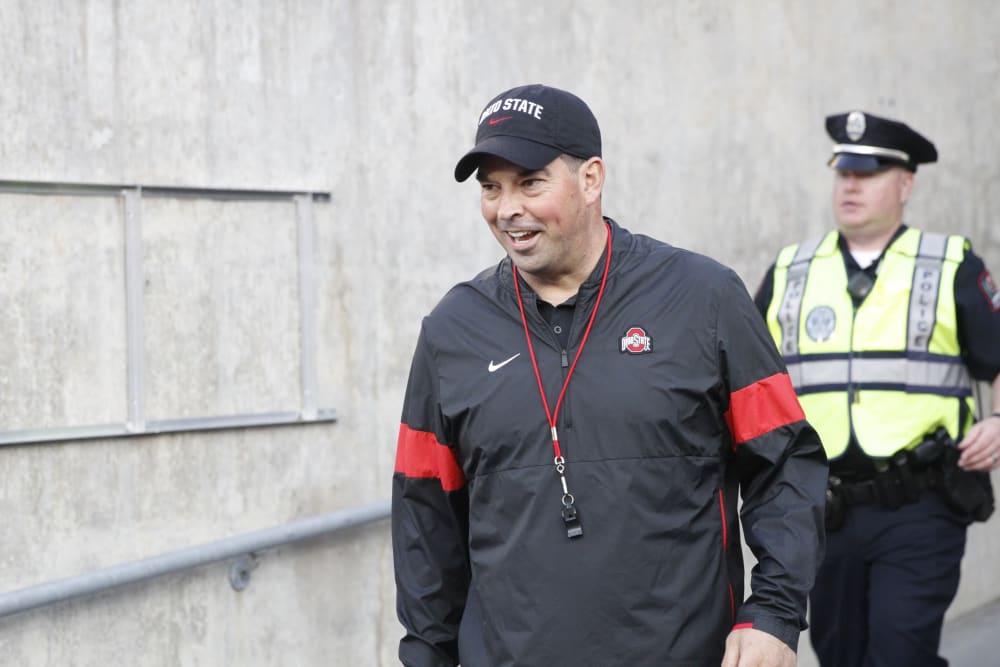 Ryan Day and the Buckeyes had a big day on the recruiting trail. (Birm/Lettermen Row)

The concerns over running back recruiting are beginning to fade for Ohio State. The country’s No. 5-ranked tailback in the Class of 2021, Evan Pryor, is now a Buckeyes commitment.

Pryor has decided that heading north to Columbus was the right move for him, pushing aside major momentum for his home-state North Carolina Tar Heels. For months, the Buckeyes program has caught the attention of Pryor, who made his first visit to Ohio State last June.

Pryor picked Ohio State over North Carolina, but also Georgia, Penn State and Oklahoma among his 35 offers. Pryor is now turning his focus to helping Ohio State land his complement on the recruiting trail, a task that could lead him to Michigan’s Donovan Edwards or Virginia’s TreVeyon Henderson, two of the Buckeyes top remaining targets at the position.

Before that can happen, though, Lettermen Row Director of Recruiting Jeremy Birmingham talked to Pryor about his commitment and what is next for the talented tailback. Find that here:

Evan Pryor: Country's No. 5-ranked running back commits to Ohio State
Watch this video on YouTube.

Ohio State is working hard to restock its secondary in the Class of 2021, and it took another step toward doing that with the addition of the top-ranked cornerback in its state, Devonta Smith.

A 3-star prospect from La Salle High School, Smith picked the Buckeyes just days after receiving his a long-awaited offer from Ohio State. The process between Smith and the Buckeyes moved quickly, showing the commitment that returning defensive coordinator Kerry Coombs made to getting to know the 6-foot, 185-pound defensive back. That relationship grew throughout the February dead period. And when the teammate of current Buckeyes commitment Jaylen Johnson landed the offer, Smith had a tough time controlling his emotions.

Birm broke down the decision from Devonta Smith and what his commitment means to the Buckeyes, the Big Ten and the national landscape of college football here.

Birm also had Smith on for a special edition of Birminology, which can be found here:

Stick with Lettermen Row for all the latest news from Birm on the recruiting trail.

On the latest Lettermen Live, senior writer Austin Ward is joined by former Ohio State linebacker Anthony Schlegel and Lettermen Row Director of Recruiting Jeremy Birmingham for a fun, casual conversation. Schlegel and Ward broke down how the Buckeyes are handling the coronavirus outbreak.

The guys talked about the offseason changes and how the Buckeyes will be impacted by the new calendar that hasn’t even been sifted through or sorted out yet. They also talk about the personal responsibility involved for each player working to maintain strength and conditioning while the Woody Hayes Athletic Center is shut down.

Birm also provided an in-depth look on how Ohio State is continuing to have success on the recruiting trail despite the recruiting dead period due to the COVID-19 outbreak.