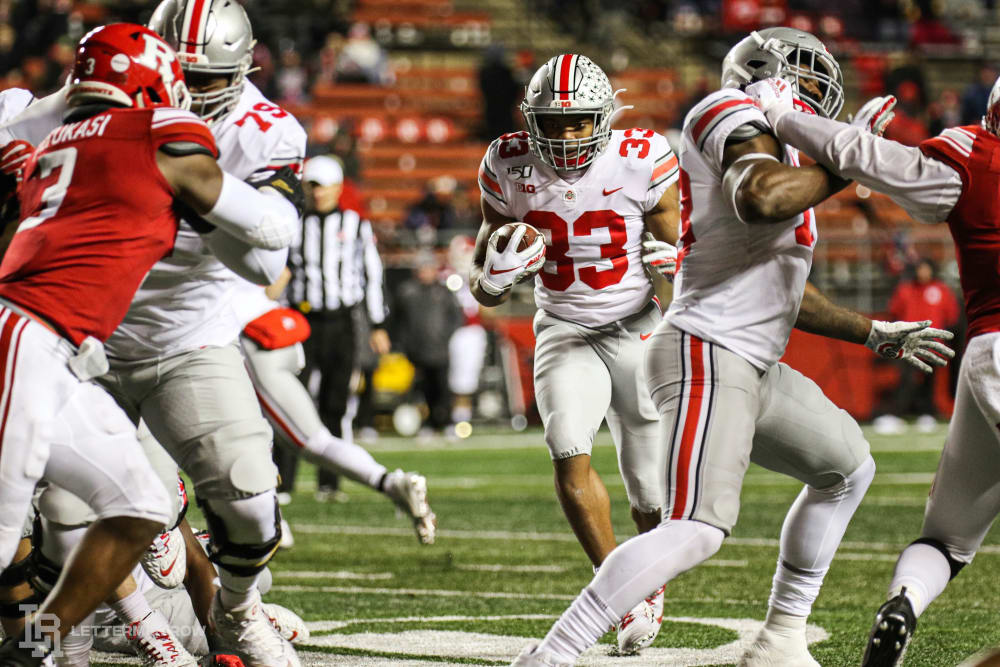 Master Teague and the Buckeyes are confident they can weather a storm if the game gets close. (Birm/Lettermen Row)

Ohio State hasn’t been in a close game yet. The Buckeyes are beating teams by an average of 41.7 points per game, and their closest game came in a 24-point win. But the Buckeyes have been in a tight situation already this season, and that might come in handy when Penn State visits Columbus on Saturday at noon.

Ohio State was locked in a 10-7 game in the third quarter against Wisconsin after the Badgers blocked a punt and threw a touchdown pass. The Buckeyes offense, faced with adversity, casually drove the ball down the field on the next possession to take a 10-point lead on Ohio State’s way to a 38-7 win over the Badgers.

That has Ohio State coach Ryan Day confident that if the Buckeyes get in a tight game, they can handle the moment the correct way.

“You just have to keep swinging away at it and have confidence that it’s going to crack, that you have the right things,” Day said. “And it’s really just figuring out what are they in, what plays do we like and then at that moment, all right, guys, let’s get the guys together and talk to them and that’s really what it comes down to.”

Confident if they need to be, but that might be a big if.

The battle Saturday between Ohio State and Penn State is one of the biggest games of the college football season, with Big Ten East, Big Ten title and College Football Playoff implications all attached to the showdown in the Horseshoe. As College Gameday and Big Noon Kickoff both host pregame shows from around the stadium, the visitors list inside Ohio Stadium might be the most impressive thing surrounding the game — other than the game itself.

High school recruits from the class of 2020, 2021 and 2022 will all be on-hand to watch the Buckeyes and Nittany Lions, as the game figures to be the biggest recruiting weekend of the season for Ohio State. For a full list of attendees, check out the latest Dotting The ‘Eyes from Birm. For further coverage on the recruiting trail, check out Lettermen Row’s Youtube channel.

Decision to return to school paying off for Malik Harrison

Malik Harrison could’ve opted to enter the NFL Draft after his breakout season last year. Instead, the freakishly athletic linebacker chose to come back to Ohio State for another season, and he is seeing the rewards of that decision as the 10-0 Buckeyes prepare to host Penn State.

Harrison has 52 tackles, 12.5 tackles for loss, 4.5 sacks and 2 fumble recoveries on the season, an impressive total. But he makes sure to keep the focus not on him, but on the defense and the team as a whole. In a new scheme under Al Washington, Greg Mattison and Jeff Hafley, Harrison seems to be playing the best football of his Ohio State career.

How has Ohio State put Harrison in position to thrive during his final season with the program? What kind of challenge does his dynamic athleticism pose for Penn State this week in the Big Ten East Division title game? Former Ohio State linebacker and captain Zach Boren was in the Lettermen Row film lab with Austin Ward looking for answers to those questions and more in the latest episode of BuckIQ.

As part of the massive showdown between the Buckeyes and Nittany Lions, FOX is rolling out an interactive feature for Saturday’s game.

Former Ohio State running back and current Lettermen Row contributor Beanie Wells will be on the field during the game, alongside former Penn State linebacker LaVar Arrington, to host the Wendy’s Watch Party on Twitter. Beginning at noon on the Twitter handle @CFBONFOX, Wells and Arrington will broadcast live from the field to talk smack to each other, provide analysis and show viewers a behind-the-scenes look from the sideline in Ohio Stadium.

FOX is also using the hashtag #BigNoon during the Big Noon Kickoff pregame show before the game, and select tweets will be shown on the video board on set.

Fans will have a chance to meet the cast of Big Noon Kickoff, including Urban Meyer, during the first hour of the show near the RPAC. There will be giveaways, as well. BTN Tailgate will also be near the Big Noon Kickoff stage.