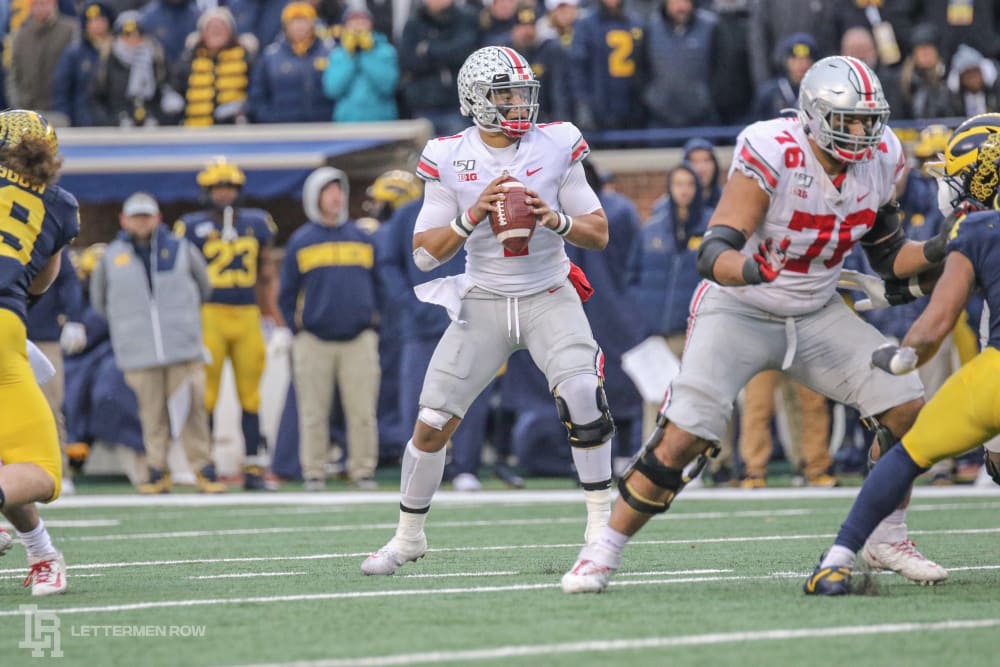 Justin Fields showed toughness for the Buckeyes after his injury. (Birm/Lettermen Row)

Ohio State had a scare last week when Justin Fields went down on the Michigan Stadium turf, then into the medical tent to have his knee examined. When he came out, he became a legend in The Game on his first play back on the field with a touchdown pass to Garrett Wilson to put Michigan away.

This week is all about rehab and exercise for Fields, making sure that knee is ready for the Big Ten championship game.

“I come in every morning and do exercises with the trainers,” Fields said. “I try to ice it a lot and just do different exercises to help strengthen my quad and my knee to get it back to normal.”

And if it isn’t back to normal, well, Fields can play through some pain. It doesn’t matter how much pain, Fields is going to be on the field for the Buckeyes against the Badgers.

Buckeyes meet with media ahead of B1G title game

Ohio State has won every Big Ten game by double digits this season, including a 38-7 win over Wisconsin in late October. The Buckeyes will have to beat the Badgers for a second time Saturday in Indianapolis if they want to cap off an undefeated regular season with a Big Ten title ring.

As Ohio State preps to meet Wisconsin again, select Buckeyes players and coaches met with the media Tuesday to preview the game and put a bow on the big win over Michigan. The full interviews and videos can be found here:

The other award winner was Chase Young, who won defensive player of the year and defensive linemen of the year. Young is the first Buckeye to win Big Ten Defensive Player of the Year since Joey Bosa in 2014.

To find out what the coaches and media voted on that was right — and what was wrong — click here.

Garrett Wilson has the talent to be an elite wide receiver at Ohio State.

All he needs now is more experience and practice fielding punts, and he might become a weapon on more than just deep balls with Justin Fields. Wilson was on the receiving end of Fields’ Heisman moment Saturday in the Big House when Ohio State destroyed Michigan. But he also muffed a punt that set up a Michigan score.

The tools are there for Wilson. Now, he needs to put them all together.

How has Wilson become so special, so quickly for Ohio State? What can the freshman do to clean up the issues fielding punts to make sure his impact in that phase matches his talent at wide receiver? Where else can he contribute during the postseason run for the Buckeyes? Former Ohio State wide receiver and national champion Evan Spencer was back in the Lettermen Row film lab with senior writer Austin Ward to look at the performance in the win over Michigan to answer those questions before the Big Ten title game.

The Buckeyes are a perfect 7-0 on the season, and they have already beaten two quality opponents at home — Cincinnati and Villanova. But now, they’ll hit the road for the first time this season when they take on North Carolina at the Dean Smith Center in Chapel Hill on Wednesday night. Ohio State has one win all time against the Tar Heels.

The line: The Buckeyes are a 2.5-point underdog, per Oddshark