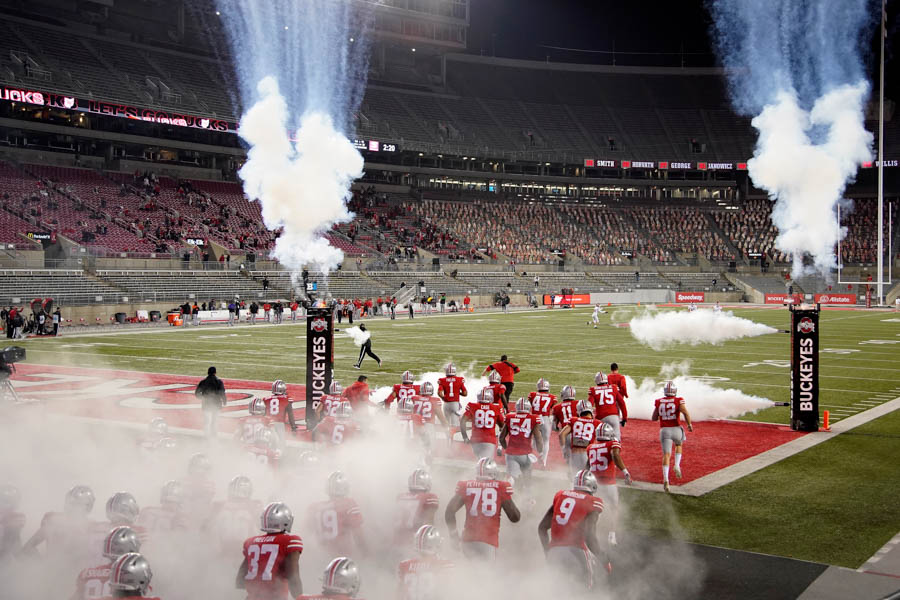 Ohio State will practice Saturday instead of playing at Maryland. (Courtesy/Ohio State Dept. of Athletics)

Ohio State was slated to be in College Park, Maryland, for a game against a Maryland team that is riding a hot streak. It could have been a nice test for the Buckeyes defense.

Instead, the Buckeyes will not be hitting the road. They’ll be on the practice field after the Terrapins canceled the game due to COVID-19 issues within their program.

Ohio State was healthy and ready to play. But it will practice instead.

“The hardest thing is looking a team in the eye after they’ve done everything you’ve asked them to do and telling them they can’t play,” Ohio State coach Ryan Day said Thursday. “I feel awful for this team. But there’s nothing we can do about it.”

The only thing the Buckeyes can do is hit the practice field and begin prepping for what appears to be the Game of the Year in the Big Ten East, and it could be the Big Ten East title game, when Indiana comes to Columbus next Saturday.

Indiana will play Michigan State this week, and the Buckeyes will be practicing and attempting to stick with a routing after the make-shift off-date. Ohio State was going to be ready when the Hoosiers come to town next week regardless of this weekend. But now, the Buckeyes will do it off of an off-week rather than a game against Maryland.

Lettermen Row Weekend Kickoff presented by Bryant Heating & Cooling Systems: The Whatever It Takes Pregame Show is back for a full show at Urban Meyer’s Pint House to preview the weekend full of college football games and discuss the canceled Ohio State-Maryland game.

The latest edition, which was filmed Thursday night, had plenty Ohio State guests on hand to break down the latest developments in the cancelation of the Buckeyes game this weekend and preview the weekend of football ahead. Bobby Carpenter, Anthony Schlegel, Michael Bennett, Cardale Jones and Robert Landers all shared their insight to break down and predict the weekend’s action that is coming.

Don’t miss the next show on Thursday, November 19 at 7 p.m. from Urban Meyer’s Pint House. Come out have some great food, drink cold Coors Light and see former Buckeyes preview the weekend full of games, including the potential top-10 matchup between the Buckeyes and Indiana.

Bold predictions if Buckeyes would have played Maryland

Ohio State didn’t need an off date just three weeks into the season. And the Buckeyes certainly didn’t want an off date to throw off their routine, give up a game in the College Football Playoff race and provide room for distractions.

But this is what the Buckeyes have to deal with now that their game at Maryland was canceled this weekend.

This disruption is a big one, and it deprives the Buckeyes of another opportunity to prove their College Football Playoff credentials as a four-touchdown favorite over Maryland. Ohio State was obviously unlikely to lose to the overmatched Terrapins, so Lettermen Row went ahead with its own routine and made Five Bold Predictions about how that game would have looked on Saturday afternoon.

Make sure to check that out here.