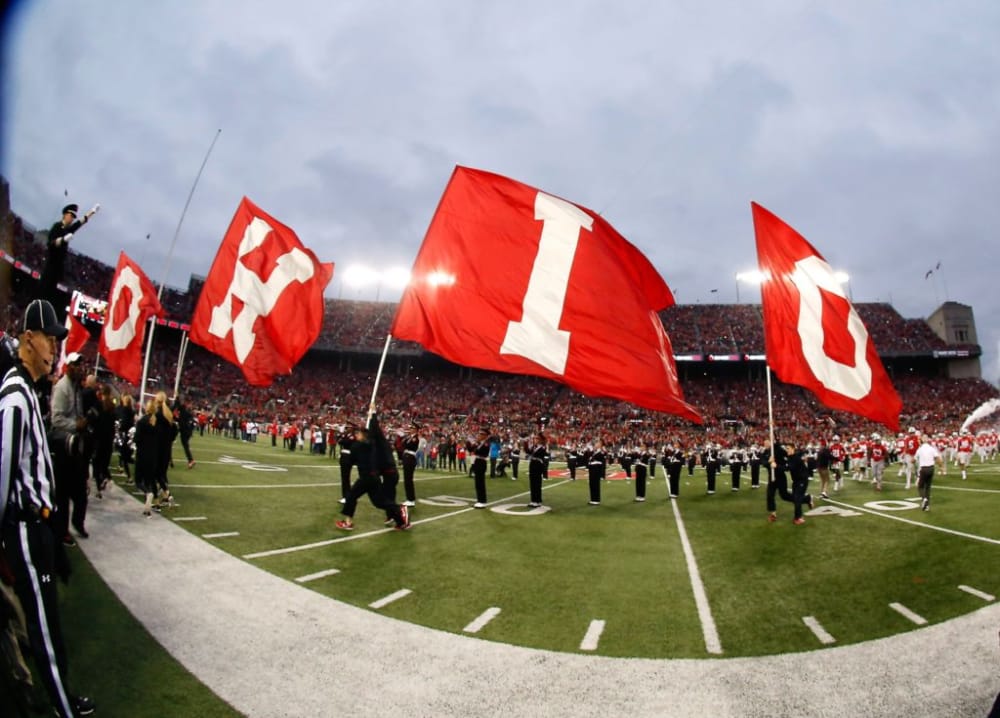 Ohio State has had the doors to the Woody Hayes Athletic Center closed for more than two months now.

But Monday, the university opened the athletic facility to a small number of staff and personnel for office use. Ohio State wide receivers coach Brian Hartline was one of them, and he seemed happy to be back to work and not stuck at home after months of quarantine.

Coaches and players for the Buckeyes had to cancel spring practice and shut the facility down after just three practices due to the ongoing global coronavirus pandemic, but it appears the athletic department is going to try getting back to some sort of in-person work.

“In alignment with the work of the university’s transition task force, a limited number of Ohio State football staff members will begin transitioning back to work in the Woody Hayes Athletic Center this week,” an Ohio State spokesperson told Lettermen Row. “All staff entering the facility will take a daily symptom assessment, including having their temperature taken. Staff will follow physical distance guidelines, wear face coverings when together, and will be strictly limited in terms of available offices and maximum number of individuals in a room. The weight room, training room, dining area, indoor facility and locker room will all remain closed during this return-to-work transition.”

The school spokesperson also told Lettermen Row that 25 total staff members, 13 on offense and 12 on defense, will be allowed in the building at staggering times for three hours per day, three days per week. No more than 10 of them can be in a staff meeting room.

That probably is a good sign for the fate of football season, and it’s certainly a welcomed sign for the Buckeyes, who want to get back on the practice field as soon as they can. Ohio’s stay-at-home order still only allows groups of fewer than 10 people to meet at a time, which means the team can’t return to work out or practice yet.

But a limited number of employees were allowed to return to the Woody Hayes Athletic Center on Monday, and that’s a good sign of things to come.

Another virtual edition of Lettermen Live presented by Roosters is here, and while the Buckeyes are still working remotely, there is plenty for the Lettermen Row crew to break down.

Host Austin Ward is joined by Lettermen Row’s Jeremy Birmingham, as well as former Ohio State quarterback Justin Zwick and former linebacker Anthony Schlegel for a conversation about the optimism surrounding a possible college football season and when the Buckeyes can get back to work. The guys break down the recent sentiment from a couple of Ohio State players saying they are willing to cooperate however they need to in order to play football this fall.

It’s Lettermen Live, and it’s all presented by Roosters.

Now, he’s the head coach at the University of Cincinnati, and he is working tirelessly to try and bring the Bearcats success similar to that he enjoyed during his time in Columbus as a player for John Cooper and as assistant coach under Jim Tressel and Urban Meyer. To do that, Fickell knows it’s important to maintain a good relationship with the Buckeyes and the current staff at Ohio State and he’s used those connections to his advantage since leaving the Buckeyes following the 2016 season.

Once he left, he began to elevate the Cincinnati football program, and he has big goals for what he wants out of the Bearcats. That included turning down a Big Ten job to continue leading his program and working to bring Cincinnati to national prominence.

The long-time Ohio State legend talked about that task, his decision to stay at Cincinnati, the challenges of the current pandemic and a whole lot more with Lettermen Row’s Jeremy Birmingham in the latest episode of Birminology here.

Buckeyes willing to sacrifice to get back to work
BuckIQ: Record-breaking Jaxon Smith-Njigba could make instant impact
Advertisement