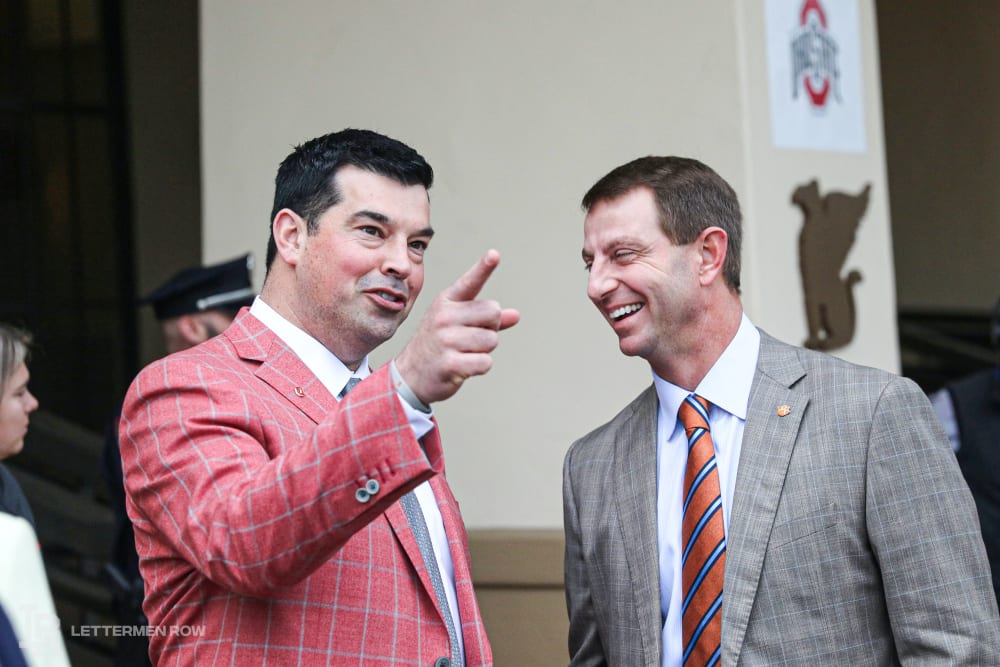 Ohio State and Clemson will meet in the Fiesta Bowl. (Birm/Lettermen Row)

Ohio State will meet Clemson for the fourth time in program history. All three games have come in bowl games, and the Buckeyes are 0-3 all time against the Tigers. Ohio State lost the 1978 Gator Bowl, the 2013 Orange Bowl and the 2016 Fiesta Bowl to Clemson. The Buckeyes are playing in their seventh Fiesta Bowl since 2002.

The line: The Buckeyes are a 2-point underdog, per VegasInsider.com

Ohio State gets to full strength for Fiesta Bowl

The Buckeyes have no game-time decisions this week according to the availability report the program released on Friday morning. And with the exception of Jonathon Cooper as he takes a redshirt, they’ll have every projected starter available just in time to go compete for a spot in the national championship.

Justin Fields will wear a soft knee brace, but he’s playing. Shaun Wade appears to be ready to roll. Damon Arnette is ditching his hard cast for a soft one. The Buckeyes are nearly as healthy as they can be, and the three-week layoff certainly helped that.

Ohio State is going to need everyone at full strength to beat Clemson, and the Buckeyes are as close as they can be, just in time for the College Football Playoff.

What can be expected of No. 2 Ohio State in the desert in the College Football Playoff semifinal against Clemson? Which superstars will make the biggest difference for Ohio State? Can the Buckeyes stop Trevor Lawrence and the Clemson offense? Will Justin Fields lead the Buckeyes to the national title game? The Lettermen Row staff passed out five bold predictions ahead of the Fiesta Bowl. Here’s what our staff predicted to see.

Miss any of our coverage so far from the desert?

Lettermen Row will be inside State Farm Stadium for the Buckeyes and Tigers, as Ohio State looks to advance to the College Football Playoff national title game with an undefeated record and a win in the Fiesta Bowl. Follow along on Twitter, Instagram and YouTube for experienced Ohio State coverage.

The Buckeyes legacy and former 4-star prospect has announced his intentions to transfer, and he’ll join former Ohio State defensive coordinator and new Rutgers head coach Greg Schiano at Rutgers. White played a huge role for the Buckeyes last season, but couldn’t seem to find a place in this season’s Ohio State defense, which went from historically bad last year to historically good this year.

White has one season of eligibility remaining and should help the Scarlet Knights as they begin a massive rebuild.