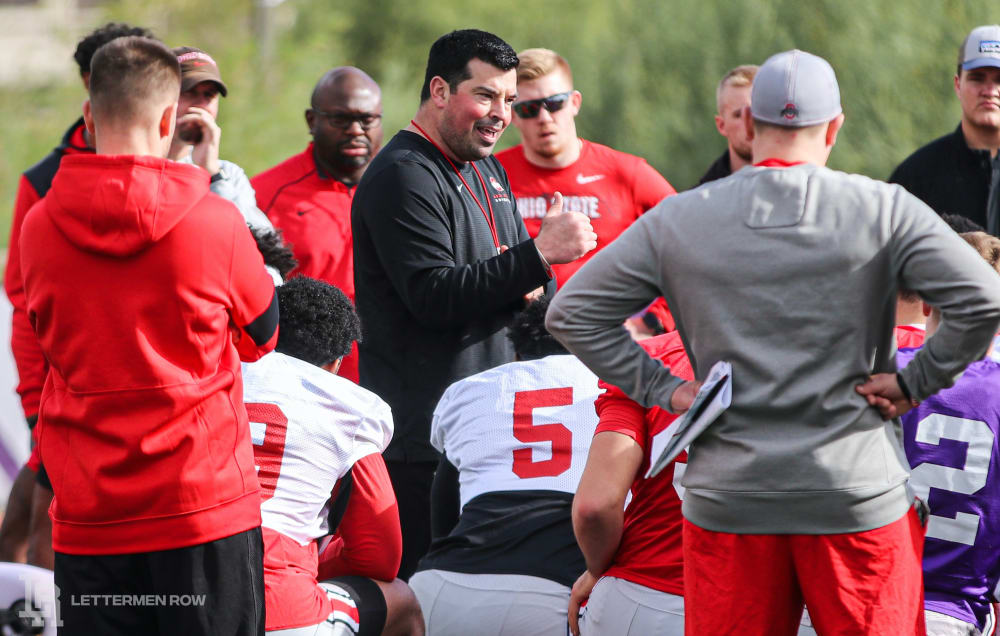 The Buckeyes were back to work Wednesday for a Christmas edition of Fiesta Bowl practice. As they took the field, the offensive line joked around with coach Ryan Day, and the Buckeyes seemed loose and relaxed as they enter the final stages of game prep.

Justin Fields continues to wear his bulky knee brace, but he maintains that he will wear the soft brace in the game against Clemson, a sign that he will be near 100 percent for the semifinal.

Lettermen Row was on site for the viewing period of Ohio State’s Christmas Day practice. Austin Ward, Jeremy Birmingham and Spencer Holbrook have the breakdown with the Playoff Drive presented by Byers Auto. Check it out.

The breakdowns of the Ohio State offense and defense — and how they matchup against Clemson — have been exhausted.

But the unit that hasn’t been discussed much in preparation for the Fiesta Bowl is special teams, and the kicking units in particular. Drue Chrisman and Blake Haubeil have been inconsistent at times this year, but the way senior writer Austin Ward sees it, the Buckeyes will need both of them if they want to win the Fiesta Bowl.

So, there might be more intrigue with Haubeil, particularly since he still only attempted 12 field goals this season and his leg has the potential to directly impact the scoreboard. The Ohio State kicker has two misses from inside 40 yards this year. But he has converted his last seven attempts and set off a wild celebration when he drilled a 55-yard bomb just before halftime at Northwestern that seemed to be designed solely to put him in a tough spot to see how he would respond. Hitting that kick might have been just the confidence-booster he needed, and he followed that up with a 49-yarder in sloppy conditions to help fuel the blowout win over Wisconsin in October.

Those guys can both be weapons for Ohio State. And while they don’t instantly come to mind as potential difference-makers in the College Football Playoff, odds are the Buckeyes are going to need both Drue Chrisman and Blake Haubeil at their best in the most competitive matchup of the year.

Jeff Okudah is aware of what has been said around the country about who the real ‘DBU’ is.

He thinks the Buckeyes have something to say about that, even if the argument typically revolves around LSU and Florida. With a big game against the talented passing attack of Clemson, Okudah, Shaun Wade, Jordan Fuller and Damon Arnette might be able to officially elevate Ohio State to the undisputed ‘DBU.’

“It’s something that we can just put in the bank, write it down in our, things that we accomplished in [Best In America],” Okudah said. “And just kind of strengthening the legacy of BIA and things that guys before us have done, and guys after us will do.”

That all goes away if the Buckeyes struggle against Clemson’s wide receivers. But that is unlikely to happen, especially with the ‘DBU’ title on the line.