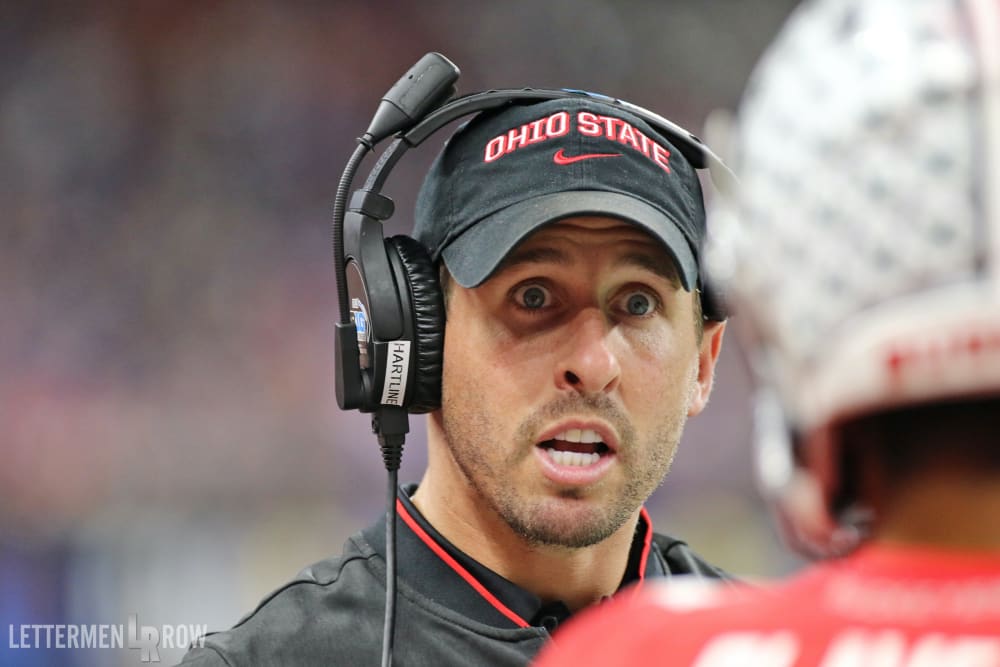 Ohio State hasn’t announced the details of new contracts for coach Ryan Day or his assistants for next season yet, but when that happens, wide receivers coach — and ace recruiter — Brian Hartline will likely receive a raise. And he’s earned that.

The Buckeyes no longer need to add any coaches through a national search. They’re content with what they have in house on offense: Corey Dennis, Greg Studrawa, Tony Alford, Kevin Wilson, Day and Hartline. But what Hartline has done on the recruiting trail and in the wide receivers room has given him some well-earned praise and attention. The Buckeyes might not have a choice but to give Hartline a raise. Our very own Austin Ward wrote about the importance of keeping Hartline with the Buckeyes staff moving forward. Part of it is here:

But to keep the passing attack humming and the pipeline of elite receivers full for the next couple years, anything the Buckeyes could do to keep Hartline comfortable had to be done as well.

How long will the Buckeyes be able to do that? That’s a tougher question to answer, because sooner or later there are going to be offers for Hartline to run his own program somewhere. Given the financial commitment Ohio State has shown for its coaching pool, the likely chance to bolster his resumé with a new title and the ability to stay close to home, there’s probably not going to be many coordinator jobs that would pull him out of the Woody Hayes Athletic Center — if any at all.

Mitchell Melton ended his recruiting process as the country’s No. 24-ranked outside linebacker prospect. The 6-foot-4, 225-pound Olney, Md. standout registered 20 sacks in his final season, and he proved that he’s not just a raw prospect. He can play at the highest level.

Melton began to be recruited by some of the midwest’s best programs — Ohio State, Michigan and Notre Dame — but the Buckeyes won out, and Melton signed in December to play for Ryan Day and the Buckeyes.

What has Mitchell Melton been up to since his commitment? Does he think the Buckeyes recruiting class will be divided between the early-enrollees and the summertime arrivals? What position will he be playing at Ohio State? The recent Buckeyes signee answers those questions and more as the latest guest of Birminology.

Ohio State has shown signs of turning a corner in the last six games. Winners of five games in that span, the Buckeyes have started to trend in the right direction, and the pollsters have taken notice.

The Buckeyes are back in the AP Poll, checking in at No. 25 in the latest rankings, which were released Monday.

Plenty of basketball remains. The Buckeyes (17-8, 7-7 Big Ten) will travel to No. 20 Iowa on Thursday night before hosting No. 7 Maryland on Sunday afternoon. Ohio State still has one of the toughest remaining schedules in the conference, and it won’t be easy to keep the spot in the AP Poll. But with wins this week, Ohio State could begin to not just crack those rankings, but climb them. With a loss, it’ll likely drop out.

The Buckeyes are certainly in a good spot for the NCAA Tournament. Their resume is strong due to good play in nonconference action, and they were once No. 2 in the country. After months of turbulence, they’re finally back in the polls.