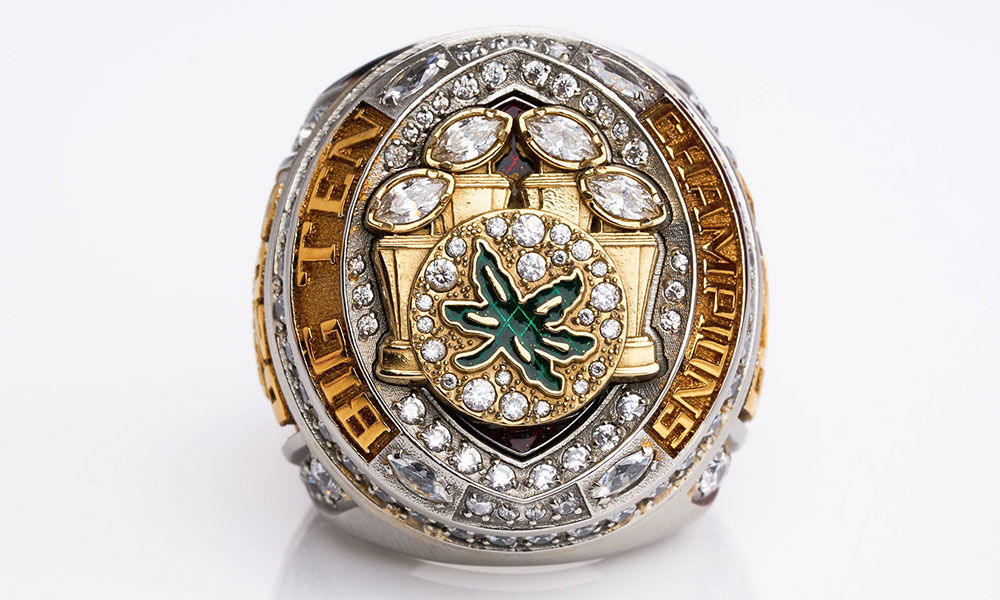 Despite only playing eight games last season, Ohio State had an incredible year. The Buckeyes won the Big Ten title for the fourth straight season and beat Clemson in the Sugar Bowl semifinal in the College Football Playoff.

For the Big Ten title and Sugar Bowl win, the Buckeyes earned rings. And the new jewelry is impressive. Instead of getting two rings — one for each title they won — the Buckeyes combined the two postseason wins for a spectacular ring to commemorate the run to the national title game.

And although Ohio State came up short against Alabama in the title game, the Big Ten championship and Sugar Bowl win were worthy of celebrating with jaw-dropping rings.

Ohio State sophomore wide receiver Julian Fleming had a decent freshman season. The former No. 1 wide receiver in the 2020 recruiting class was dealing with a nagging injury throughout that freshman season. And despite having offseason surgery and being limited in spring camp, Fleming is on a path toward stardom for the Buckeyes. He’s making progress.

Lettermen Row’s Austin Ward has more on Fleming’s development for the Buckeyes this spring:

There’s no way to truly replace the practices, workouts and game snaps that Fleming was expecting as an early enrollee after his high-profile recruitment as the nation’s top wideout. The same is true for the rest of the roster, of course, but Fleming in particular was coming from a run-first offense and was aware there was going to be a ton to learn to become a complete receiver at Ohio State.

His four-catch performance in a pressure-packed situation in the Big Ten championship was a clear sign that progress was being made even with limited practice time. And it’s a reminder that his raw athleticism can allow him to be a potential game-changer even while still learning on the fly.

For the full story about Fleming, his recovery and his progress to becoming the five-star receiver he is expected to be, click here.

Ohio State is just days away from playing the annual Spring Game. Lettermen Live is back at Roosters to break it all down.

Lettermen Row’s Austin Ward and Jeremy Birmingham are joined by Nicole Cox from Roosters, former Ohio State quarterback Justin Zwick, former Buckeyes linebacker Bobby Carpenter and former defensive end Jonathon Cooper to break down every angle of spring practice as it comes to a close. The gang talks about breakout spring performers, Cooper’s experience the last few years with the team, how he’s gearing up for the NFL draft this month and much more.

They also talk about who could shine during the Spring Game, which is slated for Saturday afternoon.