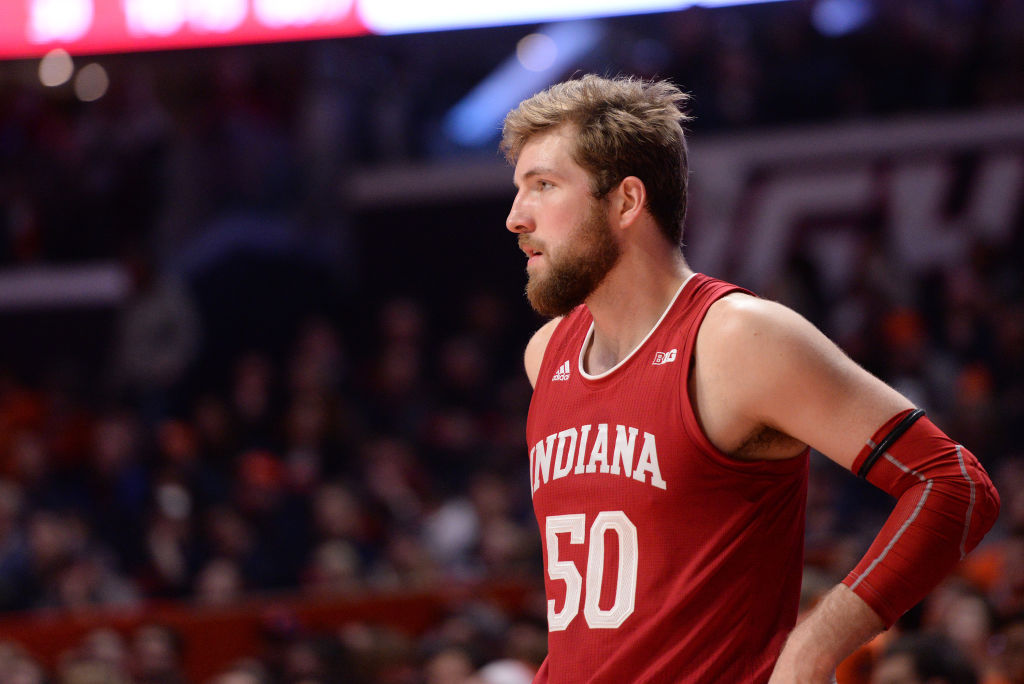 Joey Brunk will give the Buckeyes an inside presence. (Michael Allio/Icon Sportswire via Getty Images)

Ohio State has landed a big man to help in the paint.

Former Butler and Indiana forward Joey Brunk, a 6-foot-11 big man, is joining the Buckeyes as a transfer. He announced his decision Saturday night on Twitter.

Brunk was originally committed to Butler under Chris Holtmann, and Brunk played at Butler for three seasons before transferring to Indiana for one year. He started for the Hoosiers last season, in which he averaged 6.8 points and 5.2 rebounds per game. After one year in Bloomington, Brunk entered the transfer portal and will finally have a chance to play for Holtmann, the coach he expected to play for at Butler.

Brunk now joins a frontcourt that should feature E.J. Liddell, Zed Key, Ibrahima Diallo and Kyle Young. And the Buckeyes issues in that frontcourt could be remedied with another big body.

Ohio State has officially found another big man to help out in the interior. Joey Brunk should provide a much-needed boost.

Ohio State held its annual Spring Game over the weekend. The Tim May Podcast is back to break down every angle of the Buckeyes as they now enter the summer.

Tim welcomes Lettermen Row senior writer Austin Ward on the show. The guys break down the biggest questions facing the Buckeyes quarterback battle as the spring comes to a close. They also make sure to dive into the offensive skill talent and how the Buckeyes plan to utilize it all, as well as the questions remaining on defense.

Then Tim also welcomes former Ohio State quarterback Gunnar Hoak on the show to talk about how quarterback battles progress under Ryan Day and what the Buckeyes could see from C.J. Stroud and Jack Miller. The conversation makes this episode a must-listen.

Ohio State had one of the most talented rosters in college football last season. So it’s no surprise to see multiple Buckeyes in the NFL draft projections as draft season comes to a close. ESPN’s Mel Kiper Jr. and Todd McShay released yet another NFL mock draft with a little more than a week until the draft. Multiple Buckeyes are sliding up draft boards late in the process.

Lettermen Row’s Pete Nakos has more about the potential landing spots for Ohio State players early in the draft. Part of that can be found here:

Kiper and McShay only have Fields representing Ohio State in the top two rounds in Tuesday’s mock draft. But they do have three Buckeyes drafted in a late-third round barrage. First, Wyatt Davis going to the New York Jets at No. 86, followed by the Pittsburgh Steelers drafting Shaun Wade with the 87th pick. The Los Angles Rams are projected to use their 89th pick to grab Pete Werner, finishing off the run.

Josh Myers is the final Ohio State product projected to be taken in the top three rounds, drafted by the Baltimore Ravens with the 104th pick.

For the full breakdown of Buckeyes in the NFL draft, click here.