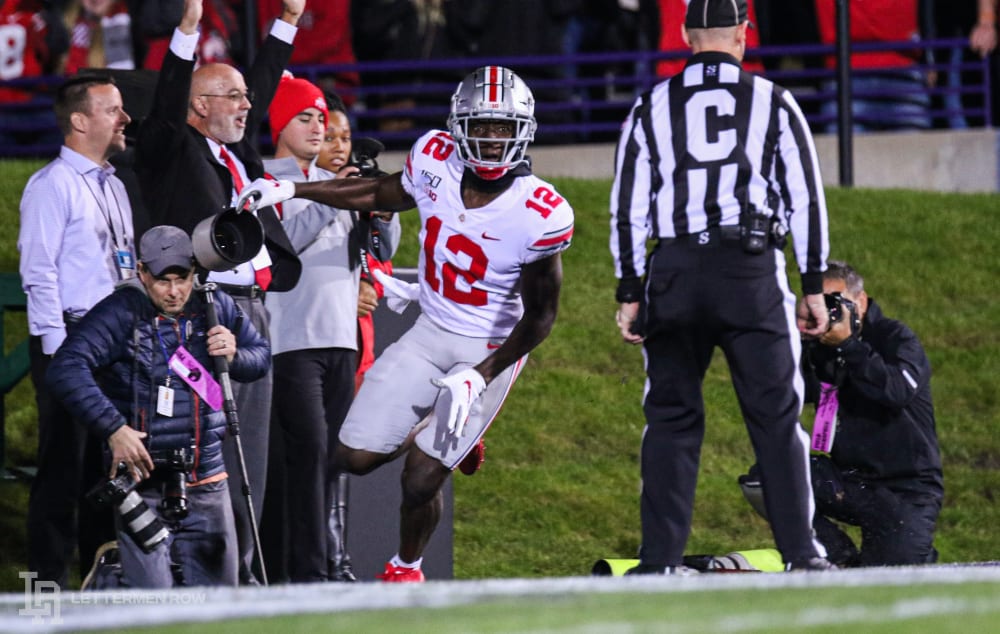 Ohio State cornerback Sevyn Banks had an interception in the win over Northwestern. (Birm/Lettermen Row)

Ohio State went on the road to Northwestern and handled the Wildcats, winning 52-3 on Friday night at Ryan Field. The Buckeyes got off to a slow start and led 7-3 after the first quarter, but as usual, they destroyed the Wildcats from the second quarter until the end of the game. Lettermen Row was in Evanston to cover every angle of Ohio State.

If you missed any of the game coverage, we have you covered:

Ohio State’s 52-3 beatdown of the Wildcats allowed the Buckeyes to stay put in the latest Amway Coaches Poll, checking in at No. 4. Ohio State moved up to No. 3 in the AP Poll, leaping Clemson.

Ohio State went on the road, handled business and celebrated early while the backups finished the game. Wisconsin, meanwhile, went on the road to unranked Illinois and got upset Saturday afternoon. The game this Saturday was slated to be a massive showdown, which it still is, but the game will no longer be played between undefeated teams.

And it certainly won’t be played between top-six teams. The Badgers checked in at No. 13 in the latest Coaches Poll.

The Buckeyes and Badgers may no longer be a matchup of two undefeated teams, but the noon kickoff will still have Big Ten and College Football Playoff implications.

After a dominant 52-3 demolition of Northwestern on the road, the Buckeyes return home for a big showdown against Wisconsin, and they’ll do so as a 14-point favorite, according to VegasInsider.com.

The Buckeyes have been a double-digit favorite in every game this season, including the ranked matchups with Wisconsin and Michigan State.

The betting line may have opened as a tighter matchup had the Badgers went on the road and beat Illinois before coming to Columbus, but they didn’t. Illinois pulled off a massive 24-23 win over Wisconsin, dimming some of the hype surrounding the Buckeyes and Badgers.

The Buckeyes recruit at the highest level in the country, meaning their commitments dominate most high school games in which they play.

That was again the case over the weekend, when several Ohio State commits had huge games.

Five-star wide receiver Julian Fleming had 127 receiving yards and two touchdowns. Four-star receiver Jaxon-Smith Njigba had a massive day and broke a huge Texas high school record. Cameron Martinez, an under-the-radar athlete, continues to be one of the best players in Michigan. Plenty of other Buckeyes impressed, as well.

Lettermen Row recruiting expert Birm has all the angles of Ohio State’s 2020 class and its performance. For more on that and the latest recruiting news surrounding the Buckeyes, check out the latest Dotting The ‘Eyes.